Named after the Malacca Sultanate, the Strait of Malacca serves as one of the most important shipping routes in the world. It is strategically located between the Indian Ocean and the Pacific Ocean, linking major economies in East Asia to the Middle East, Africa and Europe.

For centuries, nations who were rich and powerful colonized Peninsula Malaysia to monopolize this trading route. They include the Portuguese in the sixteenth century, the Dutch in the seventeenth century, and the British in the eighteenth to twentieth century.

Today, the Strait of Malacca is the second busiest waterway in the world. It serves as the main route transporting vital commodities to rapidly growing economies in East Asia.

One of the most vital commodities is oil. According to the U.S. Energy Information Agency, an estimated 15.2 million barrels of oil passed through the Strait of Malacca every single day in 2013. It is transported from the Middle East to oil importing countries such as China, Japan and Korea. It is also the world’s second largest oil transit choke-point which accounts for a quarter of the world’s maritime oil trade.

As I write, there are three major ports located along the Strait of Malacca: Port Klang in Selangor, Port of Tanjung Pelepas in Johor, and Port of Singapore.

In this article, I’ll write about Westports Holdings Berhad (Bursa: 5246). It is one of the two operators at Port Klang which derives income from providing container handling services, conventional cargo services, and a wide range of other port services.

Here are the 10 things you need to know about Westports Holdings Bhd (Westports) before you invest:

1. On 25 July 1994, Westports obtained the license to operate the port for a period of 30 years, commencing from 1 September 1994 under a privatisation agreement with Port Klang Authority (PKA) and the government of Malaysia.

On 26 June 2014, Westports received notice from PKA for the extension of the port concession period for another 30 years starting from 1 September 2024 to 31 August 2054. This provides continuity of income and the assurance to make long-term investments in port infrastructure over the long-term.

2. Westports listed on the main board of Bursa Malaysia in October 2013. At that time, it had a total container handling capacity of 9.5 million TEUs a year. Since then, it has continuously embarked on a series of expansionary activities: 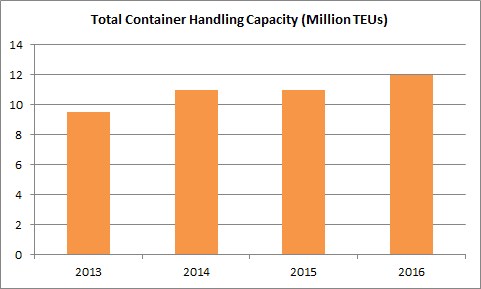 3. As a result, Westports has achieved consistent growth in operating activities over the last three years. This is evident as:

4. Over the last four years, Westports has achieved a CAGR of 10.23% in Operating Revenues. It has increased from RM1.20 billion in 2012 to RM1.77 billion in 2016. The consistent growth in operating revenues was directly contributed by the continuous rise in various port activities as discussed in detail in Points 2 and 3. 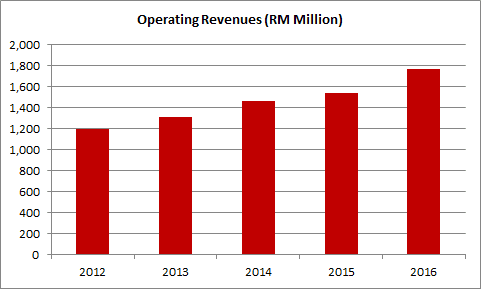 5. Over the last four years, Westports has achieved a CAGR of 15.26% in Shareholders’ Earnings. It has grown from RM360.96 million in 2012 to RM636.98 million in 2016. This was contributed from higher operating revenues and stable profit margins achieved during the period. 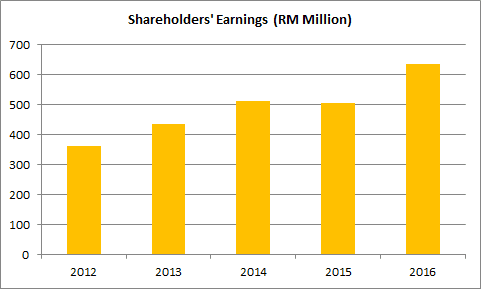 6. Westports has achieved a five-year ROE average of 27.56% a year. This means, Westports has made, on average, RM27.56 in annual earnings from every RM100 in shareholders’ equity over the last five years.

7. Over the last five years, Westports has generated RM3.40 billion in operating cash flows. It has raised RM1.09 billion in equities and net long-term debt. This has enabled Westports to spend RM1.05 billion on capital expenditures and another RM1.06 billion on expansionary activities to further develop its concession assets. 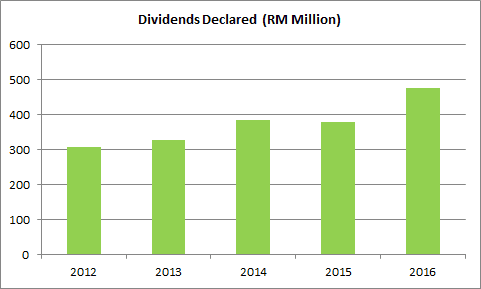 As at 13 June 2017, Westports is trading at RM3.79 a share. If it is able to maintain a dividend per share of RM0.14 for the next 12 months, its gross dividend yield would be 3.61%. Westports declares dividend payouts on a semi-annual basis and pays its dividends in the month of March and August.

9. Moving on, the global container shipping industry is consolidating and is forming new alliances. For instance:

10. Despite new challenges, the board of directors remain confident as Westports will continue to focus on its strengths such as having the best-in-class service levels, competitive port charges, IT capabilities, and excellent responsiveness to customer requirements.

In addition, the management is currently undertaking the following expansion plans to enhance the competitiveness of its port: