CapitaLand Limited (SGX: C31) is one of the largest real estate corporations in Asia. As at 30 June 2017, it owns and manages a global property portfolio worth over S$80 billion comprising residential and commercial developments, retail malls, serviced residences, and real estate investment trusts (REITs).

In this article, I’ll bring a detailed account of CapitaLand’s achievements thus far, the challenges it faces, and its targets for the immediate future. Here are the 10 things you need to know about CapitaLand before you invest.

1. CapitaLand China is the main revenue contributor of CapitaLand, accounting 45.2% of group revenues in 2016. Presently, it is a leading foreign real estate developer in China with a presence in major cities such as Beijing, Tianjin, Shanghai, Hangzhou, Suzhou, Ningbo, Guangzhou, Shenzhen, Chengdu, Chongqing and Wuhan. Over the last seven years, CapitaLand China has achieved a CAGR of 23.87% in the number of residential property units sold, from 2,400 units in 2009 to 10,738 units in 2016. In terms of total sales value, it increased from RMB5.0 billion in 2009 to RMB18.1 billion in 2016. As such, CapitaLand China is also the fastest growing division of CapitaLand Limited. 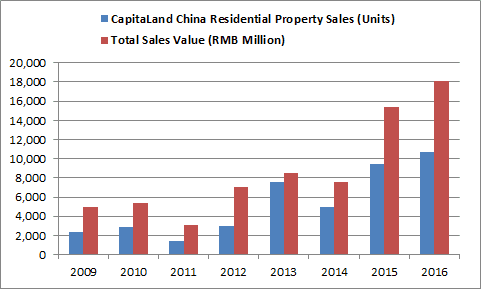 2. CapitaLand Singapore is the second largest revenue contributor, accounting 22.7% of group revenues in 2016. This division recorded lower property sales from 2014 to 2016 as it was impacted by the ongoing property cooling measures undertaken by the Singapore government since 2013. 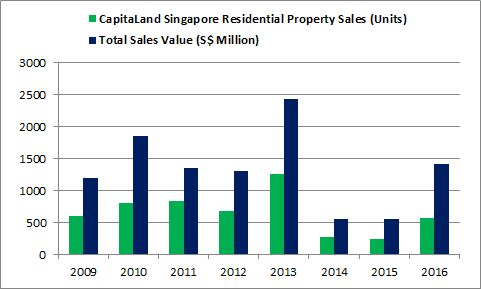 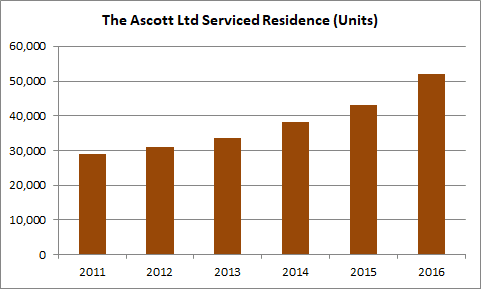 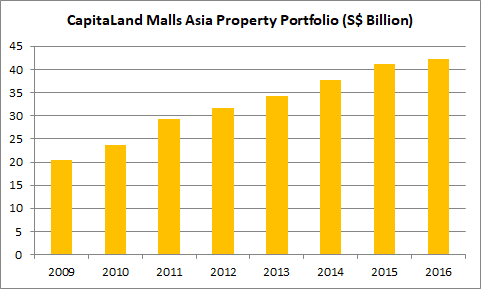 5. Overall, CapitaLand has achieved a CAGR of 19.19% in group revenues over the last five years, from S$2.18 billion in 2011 to S$5.25 billion in 2016. This is an improvement from the flat sales recorded from 2007 to 2011. The growth was directly attributed to higher property sales achieved by CapitaLand China and sales contributed from The Ascott from 2011 onwards. 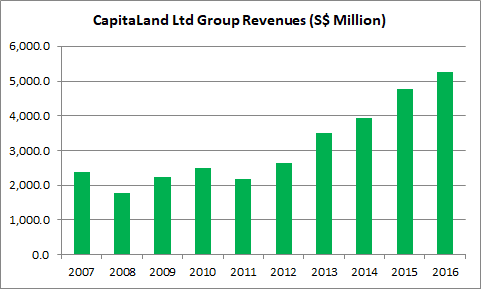 Source: Annual Reports of CapitaLand. Revenue excludes sales derived from Australand as Australand was disposed in 2014.

6. In 2007, CapitaLand reported S$2.76 billion in shareholders’ earnings. Profits were inflated high due to the S$918.5 million in divestment gains from several properties including 8 Shenton Way, a 50% stake in Chevron House, and a 45% stake in AIG Tower in Hong Kong. Australand also boasted higher profits then but has since been disposed in 2014. From 2008 onwards, CapitaLand’s shareholders’ earnings has hovered around S$1 billion a year. Profits remain flat despite a substantial increase in group revenues over the last five years. This is because CapitaLand has received lower profits from its investments in associate and joint venture companies. Overall, CapitaLand has an average five-year return on equity of 6.21%. 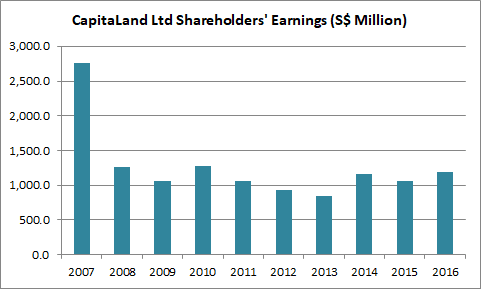 Source: Annual Reports of CapitaLand Ltd. The profit figures for 2012 and 2013 was restated as Australand was disposed in 2014.

7. From 2007 to 2016, CapitaLand generated S$5.51 billion in cash flows from operations. During the period, it received S$3.79 billion in dividends from its investments in associate and joint venture companies. It also raised S$8.8 billion in net equities and net long-term debt. Out of which, CapitaLand Ltd has spent:

CapitaLand has been using a combination of positive cash flows from operations, dividend income, and long-term borrowings to expand its property portfolio and reward its shareholders with dividends. As at 30 June 2017, CapitaLand Ltd has S$4.82 billion in cash reserves, a current ratio of 1.77, and a debt-to-equity ratio of 0.81.

9. Invariably, CapitaLand Ltd faces several risks which are inherent to the property industry. For instance:

10. CapitaLand Ltd has revealed its targets to be achieved over the next few years. For instance:

Since 2008, CapitaLand Ltd has consistently made S$1 billion a year in profit and steadily increased its dividend payments to shareholders over the last five years. Presently, approximately 79% of its total assets are investment properties which contribute recurring income to CapitaLand. They add stability and income visibility to CapitaLand Ltd as it rides through market uncertainties with a resilient integrated business model. Moving ahead, CapitaLand Limited looks well-positioned to achieve its targets by pursuing opportunities to grow its property portfolio across Asia.