A few days ago, I accompanied my mum to do some grocery shopping at Cold Storage. As we were picking some fruits, we bumped into an auntie who is a neighbour and a good friend of ours. Both “aunties” decided to shop together while I tagged along as their “assistant”.

Here’s how their conversation went:

Mum: “Look at these apples. They are so nice and fresh.”

Auntie: “Hai lor (a typical Cantonese expression for agreement), all the fruits here look so good. It’s the same with the meat and vegetables. In fact, everything here looks so much better than the ones at Giant. That’s why I like to come here to shop although I find the prices here are slightly more expensive!”

Mum: “Same here! I like Cold Storage better than Giant. After all, the place here is well air-conditioned, cleaner, and has more imported goods for me to choose from. The prices are higher, but we get better products. That’s why I’ve been coming to Cold Storage more often these days too!”

It is common for housewives, aunties, and consumers in general to choose their preferred retailers based on the quality and price of their products. For instance, Cold Storage caters to shoppers residing in more affluent areas as it offers better products at higher prices. Meanwhile, Giant caters to the low and middle-income group as it focuses on keeping the prices of its products low.

But there is one thing that many shoppers don’t know about Cold Storage and Giant — both retailers are owned and operated by the same conglomerate: Dairy Farm International Holdings Limited (SGX: D01). In fact, besides these two brands, Dairy Farm also owns a dozen more household brands in its retail portfolio (e.g. 7-Eleven) with operations spanning across 12 countries in Asia Pacific. The company is worth US$11.2 billion in market capitalization.

In this article, I’ll bring a detailed account of Dairy Farm’s success thus far, the potential risks it faces, and its recent developments which have an impact on its future. Here are the 10 things you need to know about Dairy Farm International Holdings before you invest.

1. Dairy Farm’s food division is the main contributor of sales, accounting for 74.3% of total sales in 2016. This division is involved in the operations of supermarkets, hypermarkets, and convenience stores under brands such as Wellcome, Yonghui, Cold Storage, Giant, and 7-Eleven. Over the last 10 years, Dairy Farm has expanded its retail network from 2,665 stores in 2007 to 3,839 stores in 2016. Likewise, food division sales have grown from US$4.81 billion in 2007 to US$8.40 billion in 2014, before rising substantially to US$15.17 billion in 2016. The increase was due to the inclusion of sales from Yonghui Superstores when Dairy Farm acquired a 20% stake in 2015. 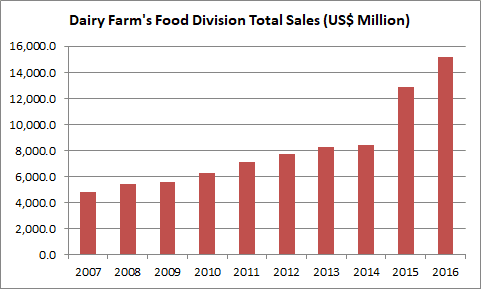 2. Dairy Farm’s health & beauty division is the second largest sales contributor, accounting for 12.9% of total sales in 2016. It involves the operations of Mannings in Greater China, Rose Pharmacy in the Philippines, and Guardian in Malaysia, Singapore, Indonesia, Vietnam, and Cambodia. The management has expanded its health & beauty retail network from 903 stores in 2007 to 1,715 stores in 2016. Similarly, division sales have grown from US$965.0 million in 2007 to US$2.63 billion in 2016. 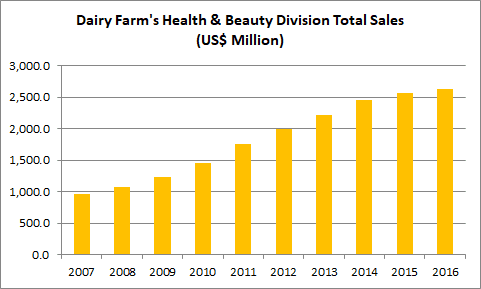 3. Dairy Farm owns a 50% stake in Maxim’s Caterers Ltd, which is its third largest sales contributor accounting for 9.9% of total sales in 2016. Maxim’s is a leading catering company based in Hong Kong. It also operates a chain of restaurants, cafés, and cake shops under brands such as Starbucks, The Cheesecake Factory, and IPPUDO Ramen. Maxim’s has doubled its number of outlets from 493 in 2007 to 985 in 2016 and sales have grown from US$803.4 million in 2007 to US$2.02 billion in 2016. 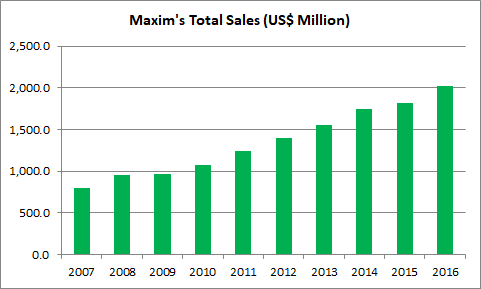 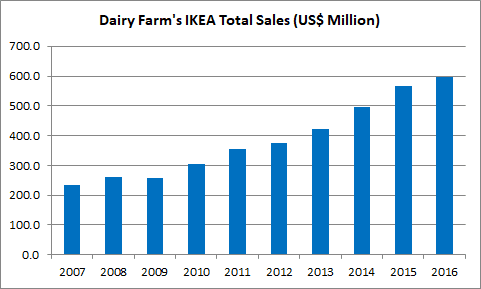 5. Overall, Dairy Farm has achieved a CAGR of 12.9% in total sales in the past 10 years, from US$6.85 billion in 2007 to US$20.42 billion in 2016. This is attributed to the improved sales performances from all its business divisions as highlighted above. 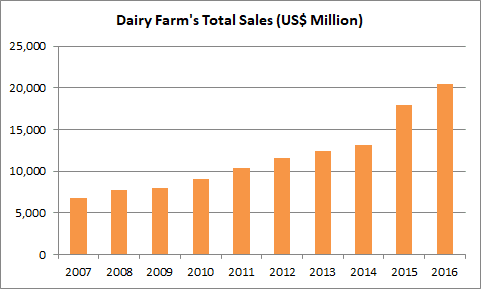 6. Dairy Farm has grown its shareholders’ earnings from US$258.2 million in 2007 to US$484.3 million in 2011, before maintaining its earnings at US$450-500 million a year from 2012 onward. The growth from 2007 to 2011 was in tandem with rising sales during the period. From 2012 to 2016, Dairy Farm recorded lower profits from its food division as a result of challenging retail conditions. The profit decline was offset by growth in profits from Maxim’s and IKEA, allowing Dairy Farm to maintain its profits over the last five years. 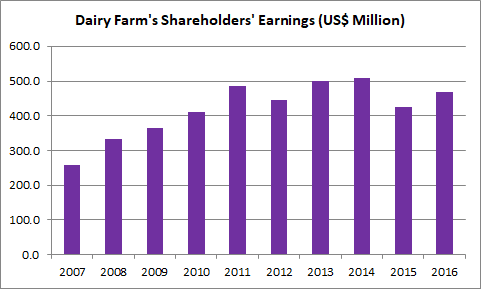 7. From 2007 to 2016, Dairy Farm generated US$5.72 billion in cash flows from operations. It received US$401.5 million in dividends from its investments in associate and joint venture companies and raised US$307.5 million in net long-term debt. Out of which, Dairy Farm has spent:

Dairy Farm has used a combination of positive cash flows from operations, dividend income, and long-term borrowings to expand its retail operations and reward its shareholders with dividends. 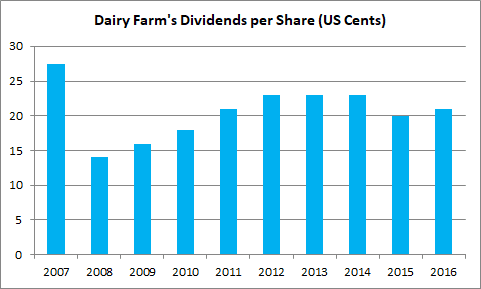 9. Invariably, Dairy Farm is exposed to the risks associated with the retail industry which is highly competitive. Dairy Farm would be adversely affected if it fails to remain competitive with the pricing and quality of its products, and adapt to changes in consumer behaviour. Other risks include the failure to secure key suppliers, staff, and future retail space. One single event or even a combination of these negative factors may result in weaker performance or hikes in operating costs, which would impact its profit margins.

10. Moving ahead, Dairy Farm has continued its retail expansion across its business divisions. Its recent developments include:

Over the last 10 years, Dairy Farm has been relentless in expanding its retail network via a combination of organic growth and acquisitions. This resulted in sales growth, stable profits, and dividend payouts to shareholders. As at 30 June 2017, Dairy Farm has US$290.2 million in cash reserves and a debt-to-equity ratio of 0.45. Maintaining a healthy balance sheet is vital as Dairy Farm continues to build its retail empire to greater heights, and ensuring its long-term success in the future.