The rubber glove is an indispensable item in today’s healthcare industry and global demand has risen steadily. In 2005, we consumed 110 billion pieces of rubber gloves. By 2016, the amount increased to 190 billion pieces. This is due to the rising demand for better healthcare and hygiene standards as a result of a growing aging population, the emergence of new health threats, and stringent health reforms and regulations,.

Today, 63% of the world’s rubber gloves is supplied by Malaysia. This is unsurprising as Malaysia has plenty of rubber trees. Currently, the nation is the third largest producer of rubber in the world. The abundance in rubber has greatly contributed to the growth of the country’s rubber glove industry.

Here are the 12 things you need to know about Top Glove Corporation Berhad. 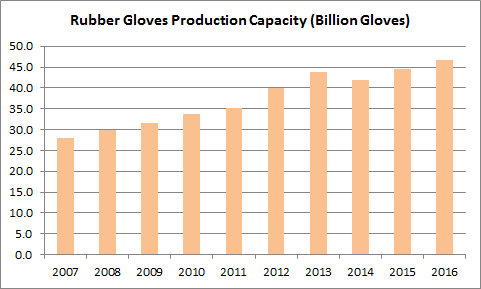 2. Top Glove has achieved an 861% growth in sales volume of nitrile (synthetic rubber) gloves from 2010 to 2016. It is an initiative of Top Glove to have a wider range of products to reduce its dependency on sales of latex (natural rubber) gloves. This enables Top Glove to mitigate the impact of rising raw material prices as nitrile is cheaper than latex. In 2011, 55% and 11% of Top Glove’s sales volume were latex gloves and nitrile gloves respectively. By 2016, the gap had narrowed to 39% and 32% of sales respectively. 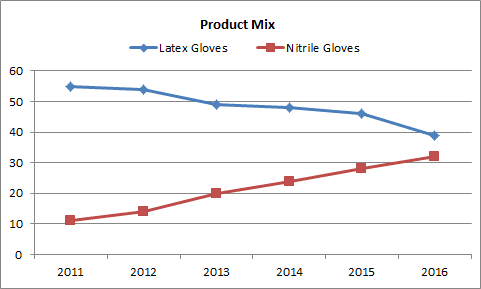 3. Top Glove has grown its customer base from 850 clients in 2007 to over 2,000 clients in 2016. The manufacturer exports its products to over 195 countries worldwide and achieved sales growth in markets like Asia and North America. Presently, not one single customer contributes more than 4% of Top Glove’s revenue. This adds stability to the company as it is not reliant on a few major customers for revenue.

4. Top Glove has achieved a CAGR of 11.27% in revenue for the past 10 years. Revenue has increased from RM992.6 million in 2006 to RM2.89 billion in 2016. The growth was directly contributed by Top Glove’s continuous expansion in manufacturing activities elaborated in the first three points mentioned above. 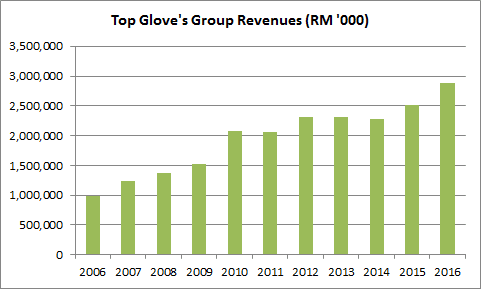 5. Top Glove has improved its profit margins over the last three years. This was despite a hike in the minimum monthly wage and two rounds of upward revisions in natural gas tariffs. The management has undertaken multiple initiatives to enhance operational efficiency and performance. They include the implementation of the SCADA system, vision camera system, immersion burners, glove mold holders, and the auto-insertion of gloves into boxes. This has reduced Top Glove’s reliance on manpower. In 2013, Top Glove took 4.46 employees to produce 1 million gloves. By 2016, the number of employees needed dropped to 3.07 per 1 million gloves. 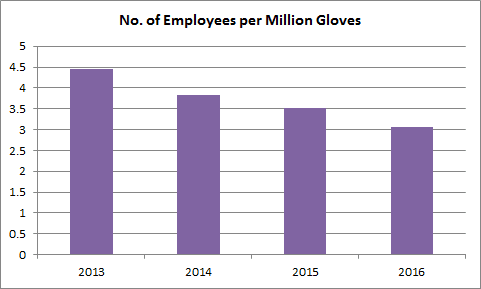 6. Top Glove has achieved a CAGR of 16.49% in shareholders’ earnings for the past 10 years. It has increased from RM78.4 million in 2006 to RM360.7 million in 2016. This was due to the continuous sales growth and higher profit margins achieved as a result of the multiple initiatives mentioned in Point 5. 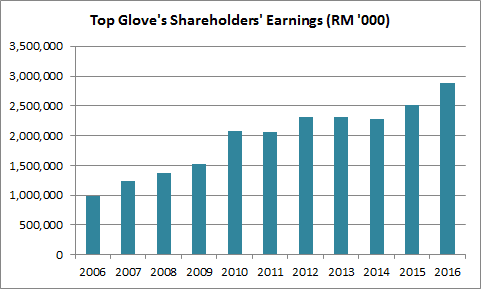 7. Top Glove has a 10-year return on equity (ROE) average of 16.75%. This means, it has made, on average, RM16.75 in annual earnings from every RM100 in shareholders’ equity over the past 10 years. Here’s why we like companies with consistently high ROE.

8. Top Glove has generated RM2.50 billion in cash flow from operations over the last 10 years. It has also raised another RM521.8 million in net equities and net long-term debt. Out of which Top Glove has allocated:

This means that Top Glove is in itself a cash-producing business and doesn’t need to continually raise equity or debt to expand its business or reward its shareholders with dividends.

9. Top Glove has consistently increased its dividend payouts to shareholders over the last 10 years. In 2006, Top Glove paid out RM14.1 million in dividends. By 2016, the amount of dividends paid out grew nearly 12 times to RM168.9 million. It is also the highest amount of annual dividends paid in the 10-year period. 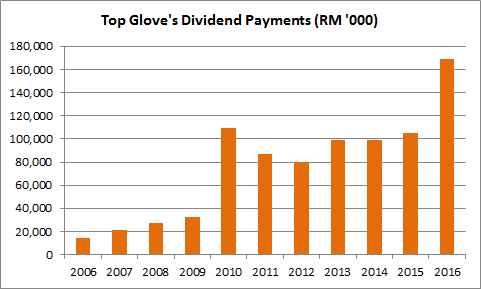 Global demand for gloves is expected to rise at 6-8% a year. Top Glove plans to expand its manufacturing capabilities to meet the expected increase in demand including:

10. Top Glove expanded its R&D team in 2016. In 2015, it had 50 researchers. In a single year, Top Glove recruited another 50 researchers, doubling its number of researchers in 2016. Top Glove’s R&D activities are focused on enhancing its newly launched range of products. They include Polyisoprene Surgical Gloves and Grip Gloves. As a result, Top Glove filed 11 patents for its range of new products in 2016 alone.

12. Top Glove also continues to expand its production capacity of nitrile gloves. As at 16 June 2017, Top Glove has 26 factories with 500 production lines which are capable of producing 48 billion gloves (both latex and nitrile) annually.

The construction of Factory 30 is reported to be almost completed. It is capable of producing 2.8 billion nitrile gloves per annum. Production is expected to commence in July 2017.

The construction of Factory 31 and Factory 32 will commence operations by January and December 2018 respectively. They have a production capacity of 3.0 billion and 4.8 billion nitrile gloves per annum respectively.

As a result, by December 2018, Top Glove is projected to have 31 factories and 628 production lines which are capable to producing 59.7 billion gloves a year — an increase of 24% from 48 billion pieces currently.

Based on its latest press release, Top Glove has revealed that it remains optimistic as the rubber glove industry is resilient in nature and the company has maintained a healthy balance sheet to finance its growth. As at 31 May 2017, Top Glove has RM212.9 million in cash reserves and a debt-to-equity ratio of only 0.18.

In conclusion, Top Glove has achieved growth in sales, profits, asset size and cash reserves over the last 10 years. Still, it remains focused in its pursuit for future growth as Top Glove has revealed its agenda to further cement its position as the world’s largest rubber glove manufacturer by raising its global market share from 25% presently to 30% by 2020.