QL Resources Berhad (Bursa: 7084) listed on Bursa Malaysia in 2000. At that time, it was principally a livestock feed trading company. QL was an obscure figure to most investors residing in the Klang Valley. This is because most of its assets were located in Sabah and Sarawak which is far away from the hustle and bustle of the capital market in Malaysia.

Ever since, QL has grown tremendously. It is now a multinational agro-food corporation with three main business divisions. QL is involved in marine products manufacturing, integrated livestock farming, and palm oil plantations and milling activities. As I write, QL is worth around RM6.0 billion in market capitalization. Today, it is a homegrown success story in Malaysia.

In this article, I’ll bring a detailed account of QL’s success thus far and its outlook in the future. Therefore, here are the 12 things you need to know about QL before you invest.

1. QL’s marine products manufacturing division is the fastest growing among its three business divisions. It is involved in deep-sea fishing, aquaculture farming, surimi and fishmeal productions. Presently, QL is the largest surimi producer in Asia. Over the last 10 years, QL has achieved a CAGR of 13.59% in revenues for this division. It has grown from RM245.4 million in 2007 to RM877.1 million in 2017. 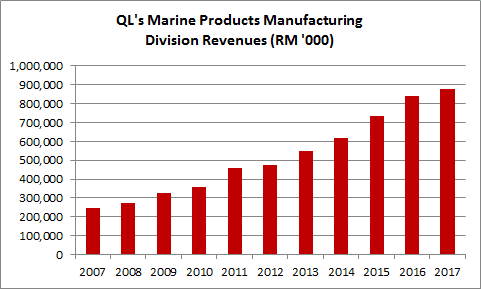 2. QL’s livestock farming division remains the biggest revenue contributor to the group. It has grown as a result of organic growth and a series of acquisitions. In 2007, this division was producing 1.5 million eggs a day. In 2017, QL produces 4.6 million eggs a day. It also produces 40 million day-old chicks (DOC) and 20 million broilers and trades over 1 million metric tonnes of animal feed raw materials a year. Over the last 10 years, QL has achieved a CAGR of 10.50% in revenues for this division. It has grown steadily from RM657.2 million in 2007 to RM1.78 billion in 2017. 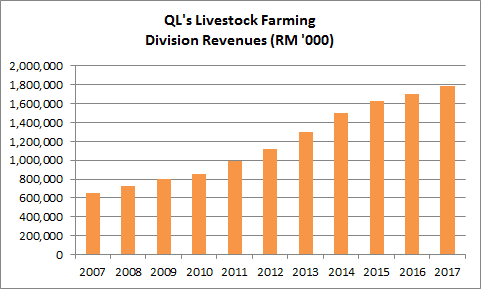 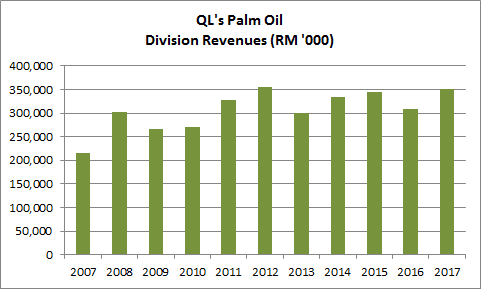 4. QL has achieved a CAGR of 10.41% in group revenues over the last 10 years. It has grown from RM1.12 billion in 2007 to RM3.01 billion in 2017. The growth was directly contributed by QL’s expansion in all its business divisions during the period. 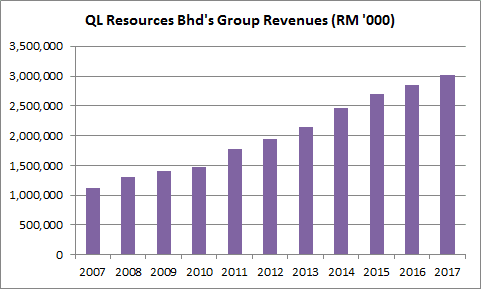 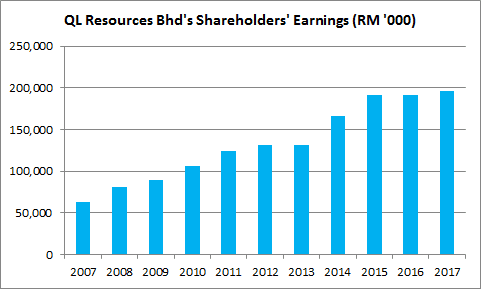 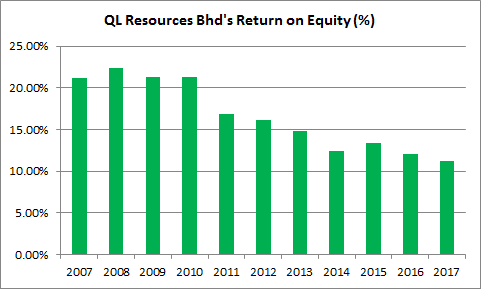 Calculated based on figures from QL annual reports 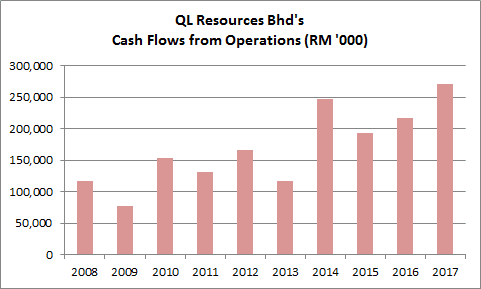 8. QL has achieved a CAGR of 14.04% in dividend payouts to its shareholders over the last 10 years. It has increased from RM14.3 million in 2007 to RM53.0 million in 2017. QL has maintained an average dividend payout ratio of 24.51% over the last 10 years. For the financial year ended 31 March 2017, QL declared 7.25 sen in dividend per share. It comprised 3.00 sen in special dividend and a final single-tier dividend of 4.25 sen. The special dividend is one-off and declared as a token of appreciation to reward its loyal shareholders. As at 4 September 2017, QL Resources share price is trading at RM4.82 a share. Excluding the special dividend, if QL is able to maintain its final single-tier dividend of 4.25 sen for financial year 2018, its expected dividend yield is 0.88%. 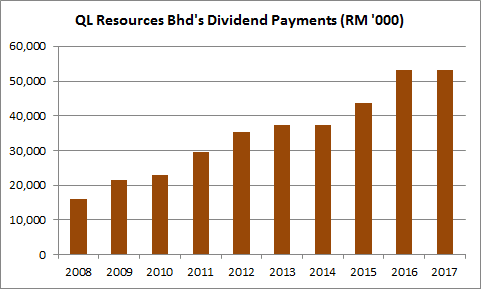 QL has revealed strategies to sustain double-digit growth until 2020. They include regional expansions and strengthening of its value chain via both upward and downward integration. In financial year 2017, QL allocated RM300 million for capital expenditure. Most of this amount has been expended. For financial year 2018, QL has set aside an additional RM300 million for capital expenditures.

Here are the key highlights:

10. In the livestock farming division, QL has reported its completion of a new third broiler farm in Kota Kinabalu and the commencement of a new poultry processing plant in Tawau. Looking ahead, QL is expecting a new 10,000 metric tonnes feed mill in Kuching to be completed in financial year 2018. QL has allocated RM15 million to expand its broiler farm houses in Indonesia and another RM50 million to invest in a new layer farm which is capable of producing 500,000 eggs a day upon completion of its first phase.

11. In the palm oil division, QL reported it produced almost 100,000 metric tonnes of fresh fruit bunches (FFB) in 2017. Presently, 90% of its planted estates are located in Indonesia. They are maturing gradually. As such, QL has revealed it expects FFB production to increase to 135,000 metric tonnes in 2018. Currently, prices of FFB and crude palm oil are trading around RM550-600 and RM2,700 respectively.

12. On 11 April 2016, QL signed an area franchise agreement with FamilyMart Co. Ltd from Japan which granted QL the exclusive master franchisee rights to develop and operate FamilyMart convenience stores in Malaysia for 20 years. On 11 November 2016, QL opened the first store in Kuala Lumpur. The immediate focus is to expand in the Klang Valley. As of 7 July 2017, QL has opened 14 FamilyMart stores. It aims to grow its network of FamilyMart stores to 300 over the next five years.

In summary, QL has built a proven track record of growing sales, profits, dividend payouts over the last 10 years. As of 31 March 2017, QL has RM280.6 million in cash reserves and a debt-to-equity ratio of 0.25. A healthy financial position is necessary to finance its expansion plans.

From a value investor’s point of view, besides fundamental qualities, stock price is an important consideration. At RM4.82 a share, QL is trading at a P/E ratio of 30.7 and P/B ratio of 3.37. Both P/E and P/B ratios are near their highest presently. As mentioned in Point 8, its expected dividend yields is just 0.88%.

So, is QL an attractive investment?

Well, can you find another fundamentally good stock that trades at a lower P/E and P/B ratio and gives you a better dividend yield?

Probably, as QL Resources’ valuation looks overpriced from multiple angles right now. So the search for better investments in the stock market continues. After all, stock investing is a continuous process of learning, searching, comparing, and evaluation.