Let us take a moment to look around.

Perhaps, as you’re reading this, you could be at home, in the office, or even travelling. Most things, if not everything, that you can see, touch, and consume have petrochemicals. They are found in a variety of products, ranging from fertilisers to food packaging, from paints to printing inks, and from vitamins to soaps, shampoos and even cosmetic products. Every day, we consume products that contain petrochemicals. They play a major part in modern living.

Global consumption of petrochemicals is projected to rise as demand for plastics, textiles, automobile, healthcare, food and agriculture continues to rise. Asia-Pacific is expected to be the main growth driver as the region becomes increasingly affluent. This augurs well for the region’s petrochemical industry over the long term.

In this article, I’ll be covering Petronas Chemical Group Berhad (Bursa: 5183). It is the leading integrated chemicals producer in Malaysia and one of the largest in Southeast Asia. Presently, it is the region’s largest producer of methanol, butanol, ethanolamines, and methyl tertiary butyl ether (MTBE).

Here, I’ll highlight 12 things you need to know about Petronas Chemical Group (PCG) before you invest:

1. Presently, PCG has a total combined production capacity of 10.8 million metric tons per annum (MTPA). It produces 4.9 million MTPA of olefins and derivatives from 11 plants and 5.9 million MTPA of fertiliser and methanol from five plants.

2. In 2013, PCG undertook statutory maintenance activities at its main cracker and related downstream facilities for its olefins and derivatives division. This caused PCG to record 7.5 million metric tons (MT) in 2013. It was the lowest produced over the last five years.

Since then, PCG has increased production of petrochemicals steadily. From 7.5 million MT, PCG has recorded 10.4 million MT in production for 2016. It was the highest achieved in the five-year period. 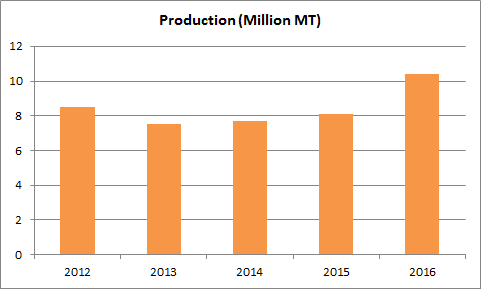 3. Over the last five years, PCG has increased its dependency on overseas market for sales. In 2013, export sales accounted for 58.0% of PCG’s group revenues. By 2016, the proportion increased to 67.3% — China, Indonesia, and Thailand are the top three markets for PCG.

This is because PCG is strategically located close to key growth markets in the Asia-Pacific region. It has the advantage of shipping its products to China in six days, Indonesia in four days and Thailand in three days with smaller ships and higher frequency over competitors from Jubail, Saudi Arabia and Houston, United States. 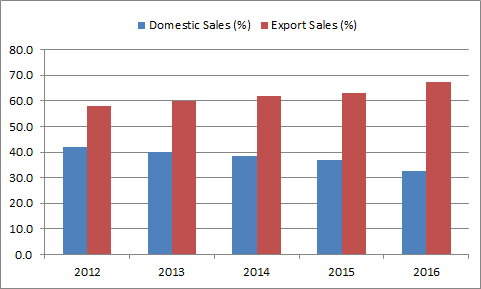 4. Despite higher production, PCG has reported lower revenues over the last five years. Group revenues have declined from RM16.60 billion in 2012 to RM13.86 billion in 2016. The decline was due to the lower average price of petrochemical products in the five-year period. 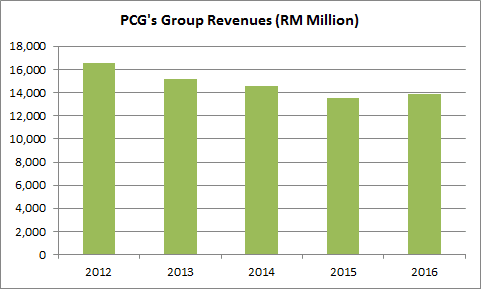 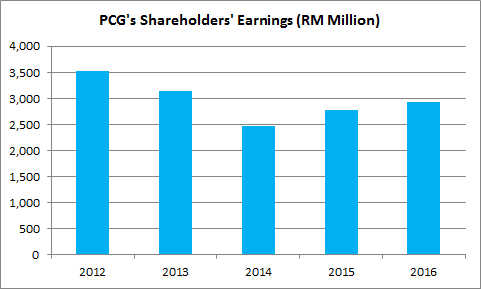 6. Despite the challenge on profitablity, PCG has maintained at least 10% in return on equity (ROE) from 2012 to 2016. This means, PCG has generated RM10 (or more) in annual earnings from every RM100 in shareholders’ equity over the last five years.

7. From 2012 to 2016, PCG generated RM20.57 billion in cash flow from operations. This has enabled PCG to spend RM11.79 billion in capital expenditures and pay out as much as RM7.80 billion in dividends in the five-year period.

8. PCG targets a dividend payout ratio of around 50% of its consolidated profits after taxation (PAT). Over the last five years, the dividend paid out is as follows:

PCG is embarking on several projects for growth over the midterm. They include:

9. SAMUR Project. PCG is investing US$1.9 billion in developing a new world-scale, green-field urea production facility in Sipitang, Sabah. It is known as the Sabah Ammonia and Urea (SAMUR) Project.

This facility is able to produce up to 1.20 million MT of urea and 0.74 million MT of ammonia per annum. This project is expected to contribute to PCG’s financial results starting in the second quarter of 2017.

The complex comprises a Citral plant, precursor plants, downstream production for aroma ingredients, a L-Menthol plant, and a Citronellol plant. Upon completion in 2017, this plant is able to produce 30,000 MT per annum of Citral, Citronellol and L-Menthol which are mainly used to produce perfumes, food ingredients, and personal care products.

11. 2-EH Acid Project. In addition, BASF Petronas Chemicals Sdn Bhd is also building a production plant for 2-Ethylhexanoic acid (2-EH acid) at their site in Gebeng, Kuantan. 2-EH acid is a chemical used for the production of synthetic lubricants, oil additives, and functional fluids such as automotive coolants.

This plant is able to produce 30,000 MT of 2-EH acid per annum. In late 2016, this plant commenced operations and successfully delivered 2-EH acid to its overseas customers.

12. HR-PIB Production Plant. BASF Petronas Chemicals Sdn Bhd will also build a production plant to manufacture highly reactive Polyisobutene (HR-PIB) at their site in Gebeng, Kuantan. HR-PIB is an immediate product to manufacture high-performance fuels and lubricant additives. Upon completion in the fourth quarter of 2017, it will produce 50,000 MT of HR-PIB per annum.

13. RAPID Project. PCG has started its participation in the RAPID project in Pengerang, Johor starting in November 2015 through its acquisition of PRPC Polymers and PRPC Glycols. PCG was awarded the engineering, procurement, construction and commissioning (EPCC) contracts for the Polypropylene, Ethylene Oxide/Ethylene Glyco, linear low-density Polyethylene plant, and Flexi-Polyethylene plants.

On 18 April 2017, PCG approved the decision for an Isononanol plant in Pengerang, Johor. The total investment cost is US$442 million. The plant is expected to be ready by the second half of 2019. Upon completion, it will produce 250,000 tonnes of Isononanol per annum. Isononanol is used to produce Diisononyl Phthalate which is widely used in industrial applications such as automotive, wires, cables, floorings, buildings and constructions.

As at 31 March 2017, PCG has RM7.02 billion in cash reserves, a current ratio of 4.91 and a debt-to-equity ratio of 0.04. Prudence in cash flow management remains vital for PCG to continue to finance its growth projects mentioned above. 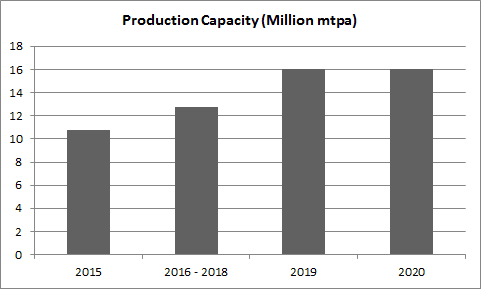 This would further cement PCG’s position as a major chemicals producer in Southeast Asia as it not only leverages on the economies of scale from increased production of basic petrochemical products, but also derives greater margins from value-added products which will serve as a buffer against market cyclicality and volatility in the future.

Related: 8 things you need to know about Petronas Dagangan before you invest