Sunway REIT (Bursa: 5176) is the second largest REIT listed on Bursa Malaysia. It derives income from a diverse portfolio of assets which include retail malls, office buildings, hotels, a hospital, and an industrial building located at key locations within the Klang Valley, Penang and Ipoh. As at 30 June 2017, the total value of Sunway REIT’s properties was appraised at RM6.69 billion.

In this article, I’ll bring a detailed account of Sunway REIT’s success thus far, the challenges it faces and its recent developments to sustain growth in the future. Here are 14 things you need to know about Sunway REIT before you invest.

1. Listed on 8 July 2010, Sunway REIT started off with an initial portfolio of eight assets worth RM3.46 billion. Five of these assets are located within Sunway City, a fully integrated township that was transformed from 800 acres of derelict mining land in the Klang Valley. It includes Sunway Pyramid, Sunway Resort Hotel & Spa, Sunway Pyramid Hotel, Menara Sunway, and Sunway Tower. The remaining assets are Sunway Carnival and Sunway Hotel Seberang Jaya in Penang and SunCity Ipoh Hypermarket in Ipoh. 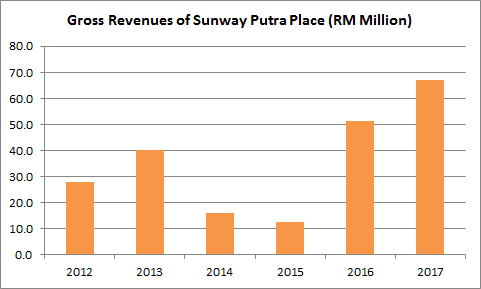 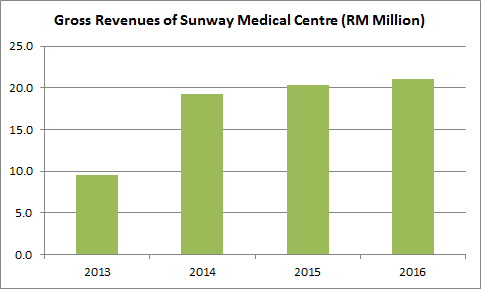 5. In 2015, Sunway REIT made two minor acquisitions — Sunway Hotel Georgetown for RM74 million in January 2015 and Wisma Sunway for RM60 million in March 2015. Contributions from these two properties is relatively insignificant as they account for only 2.2% of Sunway REIT’s gross revenues in 2017. Nevertheless, upon completion of these acquisitions, Sunway REIT has enlarged its portfolio to 14 properties worth a total of RM6.69 billion. 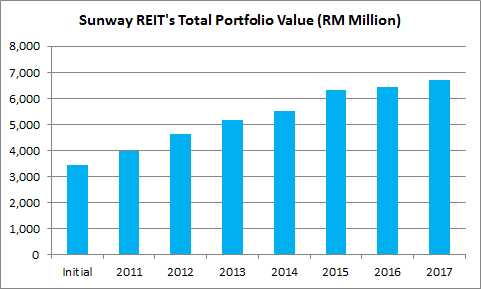 6. Sunway REIT has achieved a CAGR of 8.11% in gross revenues over the last six years, from RM327.4 million in 2011 to RM522.9 million in 2017. This is contributed by improved sales reported by key assets such as Sunway Pyramid and acquisitions of new assets as highlighted from Points 3-5. 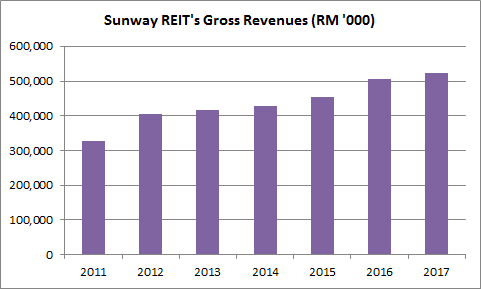 7. Sunway REIT has achieved a CAGR of 7.38% in income available for distribution over the last six years, from RM176.8 million in 2011 to RM271.1 million in 2017. The increase is in line with Sunway REIT’s continuous growth in gross revenues during the six-year period. 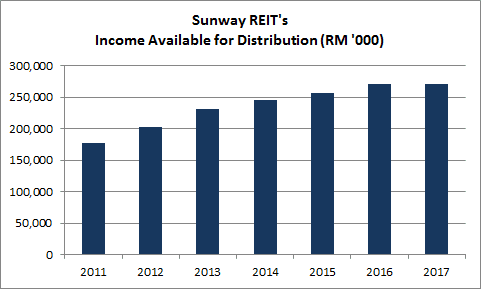 8. Sunway REIT has increased its distribution per unit (DPU) from 6.58 sen in 2011 to 9.19 sen in 2017. According to regulations, Malaysian REITs are exempted from income tax at the corporate level if they distribute at least 90% of its taxable income to unitholders. However, the proceeds received by unitholders will be subjected to withholding tax. For retail investors, both Malaysian and Singaporean alike, the withholding tax rate is 10%. Thus, the net DPU received by individual investors was approximately 8.27 sen in 2017. As at 23 November 2017, Sunway REIT is trading at RM1.69 a unit. Thus, if Sunway REIT is able to maintain its gross DPU at 9.19 sen (and therefore a net DPU of 8.27 sen after withholding tax), then its expected net dividend yield is 4.9%. 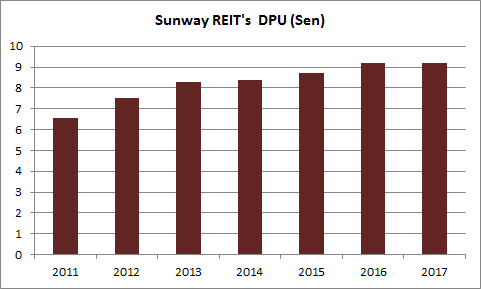 At present, Sunway REIT has candidly revealed several challenges it faces currently and discussed initiatives to mitigate their impact on its overall performances including:

10. Sunway REIT faces the risk of adverse interest rates movements. As at 30 June 2017, it has outstanding borrowings of RM264.4 million at floating interest rates. It also has RM1.4 billion due for refinancing in 2018. Every 25 basis points hike in interest rate would increase its finance costs by RM4.2 million and decrease DPU by 0.14 sen.

Sunway REIT expects DPU to improve moderately in 2018 and is embarking on several plans to sustain future growth. They include:

13. On 1 August 2017, Sunway REIT completed the acquisition of Sunway REIT Industrial Shah Alam 1 for RM91.5 million. It has bumped up Sunway REIT’s property value to RM6.78 billion (from RM6.69 billion as at 30 June 2017). It is a factory with an office and warehouse located in Shah Alam. The net property income (NPI) yield is 6.12% per annum and is expected to increase at the next rent review in January 2019.

14. On 3 August 2017, Sunway REIT announced the proposed acquisition of Sunway Clio Property for RM340 million. It is a mixed-use property comprising a four-star hotel with 401 rooms, 88,834 square feet of retail space, and 732 carpark bays which is connected to Sunway Pyramid. This acquisition is expected to be completed in Q4 2018. The property is leased to Sunway Resort Hotel for an initial term of 10 years with an option to renew for another 10 years. Sunway REIT is expected to derive RM20.23 million in guaranteed NPI for four years and enlarge its total portfolio value to RM7.1 billion upon the completion of this acquisition.

Sunway REIT has successfully doubled the size of its portfolio since its IPO in 2010 and built a track record of growth in sales, profits, and income distribution over the last six years.

Moving forward, Sunway REIT intends to expand its portfolio to RM10 billion by 2020. Besides the acquisition of Sunway Clio Property and the expansion of Sunway Carnival, Sunway REIT is on the lookout for potential acquisitions including pipeline assets from its sponsor, Sunway Berhad which is a reputable conglomerate worth RM8.9 billion in market capitalization. This enables Sunway REIT to cement its position as one of the three largest REITs listed on Bursa Malaysia.