In 2002, Hartalega Holdings Berhad (Bursa: 5168) invented and introduced the first soft nitrile gloves to the world. Since then, the industry has been revolutionized as global demand for nitrile gloves has outgrown demand for conventional latex gloves.

Today, Hartalega is the largest nitrile glove producer and among the top three largest rubber glove manufacturers in the world. As I write, Hartalega is worth RM11.7 billion in market capitalization. It is the only rubber glove stock to exceed the RM10 billion mark on Bursa Malaysia.

In this article, I’ll bring a detailed account of Hartalega’s impressive growth since its IPO in 2008 and its plans to sustain growth in the future. Therefore, here are the 14 things you need to know about Hartalega before you invest.

2. Hartalega has increased its efficiency in producing nitrile gloves by investing in higher efficient production lines which are able to produce more nitrile gloves in less time. For instance, the production lines installed in Plant 4 can produce up to 30,000 gloves per hour. The ones in Plant 5 and Plant 6 are better as they can produce 36,000 and 45,000 gloves per hour respectively. This enables Hartalega to benefit from economies of scale and lower its cost per glove.

4. As a result, Hartalega has achieved a compound annual growth rate (CAGR) of 29.75% in nitrile glove sales from 1.86 billion pieces in 2008 to 14.94 billion pieces in 2016. This is due to substantial orders from key markets such as the United States and Europe over the eight-year period. Both these markets contributed approximately 80% of total revenues to Hartalega over the last five years. 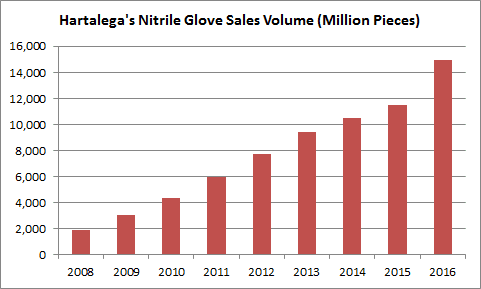 5. Hartalega achieved a CAGR of 24.28% in group revenues over the last nine years from RM257.82 million in 2008 to RM1.82 billion in 2017. This is contributed by continuous growth in sales and production capacity during the period. 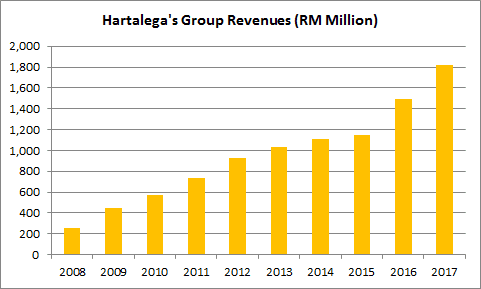 6. Hartalega achieved a CAGR of 16.88% in shareholders’ earnings over the last nine years from RM69.55 million in 2008 to RM283.04 million in 2017. The growth in earnings was slower as Hartalega has incurred higher cost of sales, administration and distribution expenses particularly from 2012 to 2017. 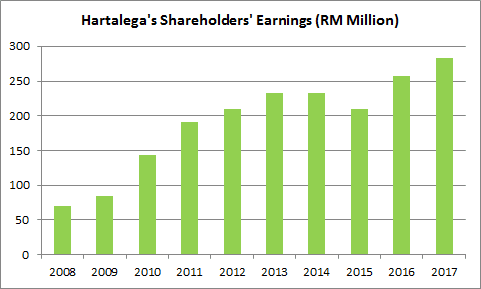 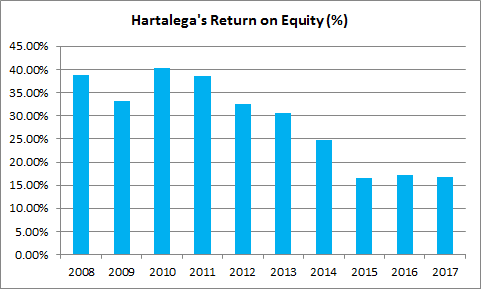 8. From 2008 to 2017, Hartalega generated RM2.03 billion in cash flows from operations. It also raised RM449.07 million in net equities and long-term debt. Out of which, Hartalega has invested:

This means, Hartalega is a cash-producing business and doesn’t need to continually raise equity or debt to expand its business or reward its shareholders with dividends.

Hartalega will continue to derive income from its site at Bestari Jaya while pursuing sustainable growth from the NGC. Here are the major highlights of its future outlook.

11. At present, Hartalega has 45 production lines in Bestari Jaya which are capable of producing approximately 14.0 billion gloves per annum. The average output per line is 28,000 pieces per hour.

12. The NGC will boost Hartalega’s production capacity up to 42.4 billion gloves per annum upon completion in 2022. This is because the NGC will be equipped with 72 production lines which are capable of producing 28.0 billion gloves per annum. The average output per line at the NGC is 45,000 pieces per hour. Thus, it will also drive up Hartalega’s overall productivity as more production lines are introduced progressively. 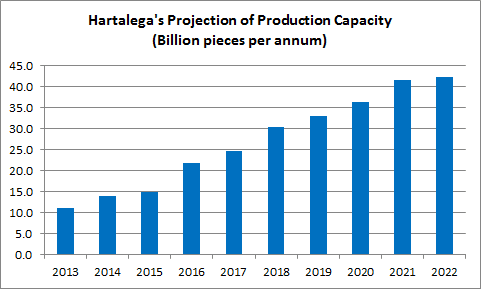 14. In addition, Hartalega has identified potential in China and India. On a per capita basis, China and India uses 5.3 and 4.0 pieces of gloves respectively compared to 166 pieces in the United States and 100 pieces in the European Union. Presently, two subsidiaries, Yancheng MUN Medical Equipment Co Ltd in China and MUN Health Product (India) Pvt Ltd in India have been established in 2012 and 2013 respectively to sell nitrile gloves in both countries. With ongoing healthcare reforms, China and India are expected to substantially increase their demand for rubber/nitrile gloves.

In conclusion, Hartalega has built a track record of delivering growth in sales and profits over the last nine years. As at 31 March 2017, Hartalega has RM120.26 million in cash reserves and a debt-to-equity ratio of 0.14. At present, Hartalega remains committed to maintain its growth momentum while placing efforts to ensure stable margins through cost optimization, economies of scale, and incremental productivity gains.