These are some of the characteristics of the STI ETF:

As you can see on the table above, the STI ETF is an established one with $401 million in net assets with a full 5-star rating from Morningstar. The top 10 holdings of the ETF are listed below and they give us a sense of the quality of the fund’s holdings. It should also be noted that the expense ratio is extremely low at 0.3%.

In comparison, an SMU survey puts the typical cost of a unit trust at 2-5% for upfront sales charge and 1-2% for annual expense ratio. The survey recommended the purchase of ETFs over unit trusts unless a unit trust manager is exceptional. This is because it has been proven to be exceptionally difficult to outperform the market when hefty fees are involved. 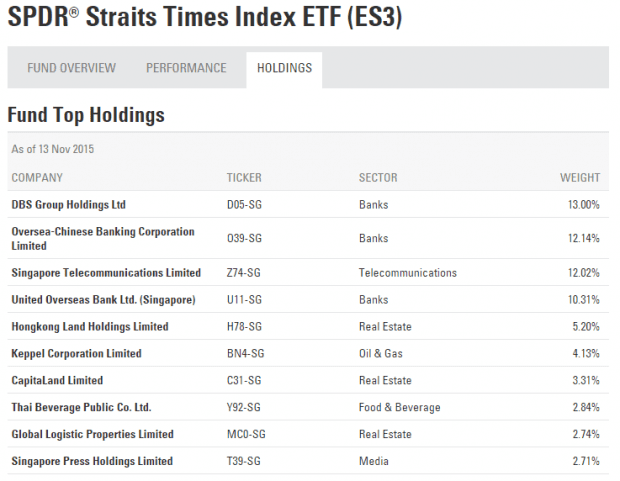 The STI ETF is also highly diversified across different sectors which represent Singapore’s economy. As Singapore is a financial hub, the ETF is also heavily tilted towards the banking and real estate sectors. All top 10 holdings are Singapore-based companies except for Hong Kong Land and Thai Beverage which have their headquarters in China and Thailand respectively. Still they are included as they are prominent companies and are listed on SGX. 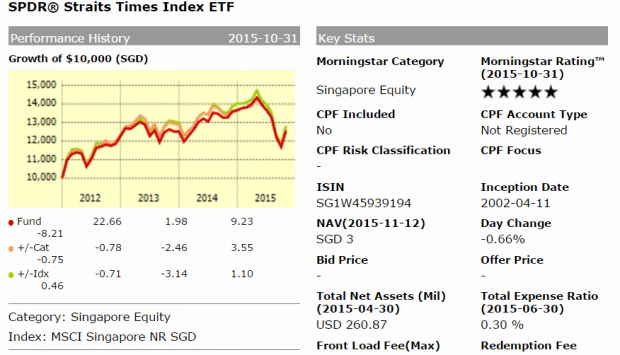 Morningstar is an independent company that accesses the quality of mutual funds and ETFs around the world. While it is good that ES3 has a 5-star rating on Morningstar, we can see that the 2015 performance has been bad. If you invested $10,000 in 2012 when the price was at $2.78, you would be sitting on $10,791 today with prices at around $3. This is a mere 7.9% return over four years (excluding dividends).

So the big question is: How is Singapore’s economy likely to perform (and in turn the STI) in the midterm? Here are two main reasons why I think the Singapore economy and the STI will continue to be weaker in the next 1-2 years:

Singapore exists to serve the world. According to the World Bank, Singapore has the second highest trade to GDP ratio at 252% in 2014. Only Hong Kong had a higher ratio at 386%.

As you can see from the chart above, China is Singapore’s top export market. Therefore when China experienced severe manufacturing weakness in the last quarter, it affected Singapore. For more details on China’s weakness, you can refer to my previous article on how the Chinese stock market plunged 40% in in July and why the STI subsequently broke below 3000 points in August.

So unless China gets its act together, Singapore will be pulled down along with it. Luckily for Singapore, the Trans Pacific Partnership (TPP) was finalized recently in October 2015. The TPP opens up trade with 12 other nations and it is the largest free trade agreement that covers 40% of the global economy.

Side Note: The TPP & AEC

The TPP should provide new sources of growth for Singapore especially with the introduction of Canada and Mexico as our free trade partners. You can refer to my August 2015 article about the TPP for more information (I’ll also cover more about the TPP in an updated article soon). Another source of trade growth would be the Asean Economic Community (AEC) which will allow Singapore to trade and invest more freely with the other 9 ASEAN countries.

With these two major trade agreements, China’s economic importance will start to reduce over the next five years even as it remains a very important trading partner to Singapore. However there is a catch to these two trade deals. The AEC is only expected to be fully implemented in December 2015 by the ten ASEAN nations and there is a one-year lag for the completed trade agreements to be reflected in the economy and five years before export changes can be fully absorbed. This would mean that the AEC can only be reasonably expected to improve our exports and economic performance from January 2017 onwards.

The TPP has been finalized and it requires ratification from the 12 national parliaments. This can be easily done in Singapore as we have a strong-handed government. However it gets messier with other countries and we should not expect full ratification until June 2016 at the earliest. This is because countries like the U.S. require at least 90 days of debate and review before the TPP can be approved by Congress, Senate and signed into law by the President. Given the complicated nature of politics overseas, it would be prudent to double the expected timeline. Hence, even in the best case scenario, we can only expect the TPP to benefit Singapore from July 2017 onwards.

Singapore GDP growth is weak at the moment and this provides an insight as to the overall performance of the STI. The index started to weaken in the second half when it became clear that growth in the second quarter this year would be disappointing. Q3 growth of 0.1% helped Singapore escape a technical recession (just barely!) but that is hardly cause for celebration. 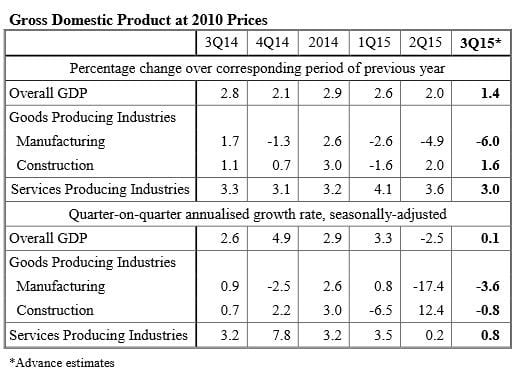 In August 2014, Singapore’s Ministry of Trade and Industry had to refute claims that its economic restructuring efforts from the Economic Strategy Committee of 2010 had failed. After the 2015 general election, Prime Minister Lee Hsien Loong ordered newly-appointed Finance Minister Heng Swee Keat to chair the high-powered ‘The Future Economy’ committee to review Singapore’s economic measures that have been in place since 2010.

This new committee faces the challenge of powering growth despite weak global growth. Good decision-making and economic policies require time and effort to plan and implement before its effects can be seen economy wide. The previous committee took a year to formulate its solutions. So it is reasonable to say that Mr Heng and his able team will require some time as well to deliver their own policies.

The strong mandate given to the ruling PAP government when it garnered 69.9% of the popular support provides Singapore with an edge of political stability over its neighbours. As the Wall Street Journal pointed out, Singapore’s is a safe habour for investors and will help to draw foreign investments into the country on account of our stability. So while the economy isn’t doing too well now, this is one silver lining we have and the assurance that we are in good hands economically.

Since Singapore’s economy looks like its facing headwind in the near to midterm, the STI’s performance will likely continue to remain underwhelming as well.

Of course, you could also say that the best time to buy is when there are is blood on the streets. However, I am not sure that we are in a state of maximum pessimism right now. Unless the current situation suddenly changes, I would expect low to negative growth for Singapore to continue for the next year or so. And if there is any exceptional good news that would encourage me to personally purchase the STI ETF before then, you will read it here first on The Fifth Person.

In the meantime, I’ll be patiently waiting on the sidelines.