MyEG Services (Bursa: 0138) is involved in the development and implementation of electronic channels for various government services. These include renewal of road tax and motor insurance, issuance/renewal of drivers’ licenses, payment of traffic fines, renewal of foreign workers’ work permit and insurance, collection of zakat, and more. It is like Malaysia’s ‘online government department’.

We attended the most recent MyEG Services AGM to find out more about its performance for the past financial year and to suss out the management better.

In addition to the AGM, the company also held an EGM to obtain shareholders’ approval for the company to diversify into the foreign workers accommodation programme.

Here are 10 things we learned from the 2017 MyEG Services AGM/EGM:

1. MyEG registered a 31.8% increase in revenue year-on-year to RM371.22 million. Likewise, its net profit jumped 40.4% to RM200.05 million. The substantial growth in both revenue and profit is mainly due to higher contributions from across MyEG’s core business segments. From 2012 to 2017, MyEG recorded 40.9% and 48.9% CAGR in revenue and profit respectively. 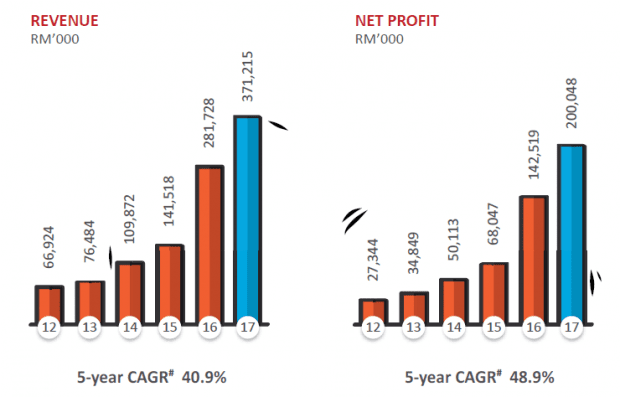 3. A shareholder raised his concerns about the delay of the company’s GST Monitoring Project which was supposed to launch in June 2017. The management explained that the delay was mainly due to problems during installation of dongles at older cash registers (more than five years old) in F&B outlets in Klang Valley. The good news is that they’ve managed to resolve all the problems and are now testing the system to ensure everything runs smoothly. The management also mentioned that MyEG has yet to receive any income from this project until it is fully implemented effectively according to the Custom Department’s satisfaction.

4. MyEG subsidiary, MyEG Credit, has been granted a moneylender’s license for a period of two years. MyEG Credit aims to provide micro-loans to individuals (Malaysians and foreign workers) by leveraging on MyEG’s customer database from its road tax, insurance, and work permit segments. Moneylending funds will first be raised internally. The management said that the risk is reduced substantially as the loans would be guaranteed by the moneylender’s peers and all personal details captured in the MyEG database.

5. A shareholder asked why MyEG doesn’t have its own insurance products and the possible impact of that. The management replied that MyEG’s website only compares insurance products from different insurance providers to help customers make better choices. The customer data is then used to promote other services that MyEG provides and generates revenue from.

6. One shareholder pointed out that the company’s database is its most valuable asset and shared her concerns about the database being hacked or stolen. The management agreed that the database is the company’s most valuable asset. As such, they have undertaken various cybersecurity measures including firewalls, antivirus/antimalware systems, and access and vulnerability management systems. MyEG also has servers housed in different locations, so even in a worst-case scenario, only partial data will be lost.

7. MyEG is planning to set up and manage centralised, integrated living quarters to house foreign workers. This is in line with the government’s new policy to house foreign workers in designated areas. The foreign workers accommodation programme (FWAP) will complement MyEG’s existing foreign worker permit renewal business and the rental income is estimated to provide a new source of recurring income. If the segment is growing well, the management may even consider spinning it off as a listed entity or REIT.

8. A shareholder mentioned that FWAP would be a capital-intensive business, and asked about the programme’s CAPEX and how it would affect MyEG’s gearing. The management said that an estimated RM50 million is needed to complete one site within 18 months. Five to ten sites will be constructed at one time funded by internal and external sources. The management targets to build 200 sites in 10 years. As such, FWAP is expected to increase the company’s gearing ratio during the initial construction phase but cash flow from completed operating sites will be used to reduce the loans and fund new sites.

9. The management also shared that each site will have basic facilities and specifications similar to low-cost apartment housing. Each room will have four beds and each bed leased at RM150-RM250 per month depending on location. Each site will have around 2,500 to 3,000 workers.

10. Another shareholder highlighted that land is expensive and difficult to obtain and asked how MyEG plans to work around this issue. The management explained that they do not expect to face any difficulties in securing land at reasonable prices as they will partner with the state government to identify suitable plots of lands to be developed.

From attending the AGM and EGM, it seems that MyEG’s management is ambitious in wanting to diversify and grow the company further by leveraging on its large customer database.

Even though FWAP will be a capital-intensive project which loads the company with more debt, the majority of shareholders were supportive of its future potential and the resolution was passed for FWAP to proceed.