Sunway REIT (Bursa: 5176) is a Malaysian REIT with a diverse portfolio of assets including retail malls, office buildings, hotels, a hospital, and an industrial building located in Malaysia. As at 30 June 2017, the total value of Sunway REIT’s properties was valued at RM6.69 billion.

This is Sunway REIT’s first annual general meeting without Tan Sri Dato’ Jeffery Cheah, the founder and chairman of Sunway Group, after he resigned as chairman in September 2016. He was replaced by Tan Sri Ahmad bin Mohd Don. To our surprise, no one raised any questions at the AGM about Tan Sri Dato’ Jeffery Cheah’s resignation. Beyond that, we attended the AGM to find out more about the REIT’s past financial year’s performance and the management’s views for the year ahead.

Here are seven things we learned from the 2017 Sunway REIT AGM.

1. Sunway REIT posted 3.1% growth in total revenue year-on-year to RM522.9 million. The moderate growth was contributed by growth from the Retail segment which was mitigated by a drop in the Hotel segment and flat contributions from the Office and Others segments: 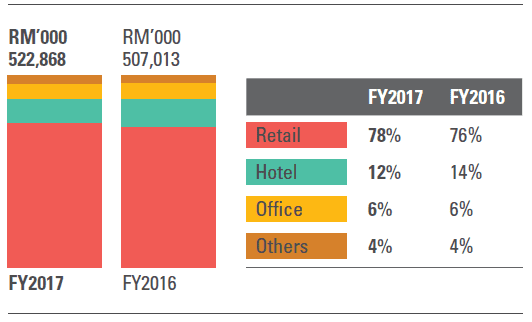 3. A shareholder raised his concerns about the low occupancy rates at Sunway Putra Tower and Sunway Tower and asked the management what their plans were to improve this. CEO Dato’ Jeffery Ng revealed that they have managed to secure new tenants for Sunway Putra Tower and occupancy rates are expected to rise to above 70% by the end of 2017. Sunway Tower suffered a drastic drop in occupancy — from 84.3% in 2014 to 20.7% in 2017 – due to a major tenant moving out. There is a slow take-up rate for Sunway Tower as the it is an old building which does not have MSC status. He added that it is not worthwhile for the building to apply for MSC status due to the high cost.

5. On 3 August 2017, Sunway REIT acquired an industrial hub, Sunway REIT Industrial – Shah Alam 1, for RM91.5 million. A shareholder was curious to know if the management planned to diversify into more industrial assets. The CEO first highlighted that the value of Sunway REIT’s industrial assets was minimal compared to the total portfolio and the management have no intention to move away from its core focus in retail/office assets. He added that Sunway REIT is on track to achieve its target of RM10 billion in property portfolio value by 2020 with the backing of the acquisition pipeline from its sponsor.

6. The CEO commented that the retail rental market in Malaysia is still very challenging with new malls opening, ever-evolving consumer tastes, and a difficult economy outlook. Therefore, the management is careful in selecting the right tenants to ensure a tenancy mix that will continually attract shoppers to Sunway REIT’s malls. He confirmed that this was the management’s primary strategy over increasing rent. Hearing this, a shareholder was interested to know the rental reversion for all malls. The CEO shared that Sunway Pyramid Shopping Mall and Sunway Carnival Shopping Mall recorded single-digit positive reversions. But SunCity Ipoh Hypermarket had negative reversions (one tenant was given a 15% discount from RM2.30 to RM2.00 per square foot after just three months with them) and rental reversions at Sunway Putra Mall remained flat.

7. A shareholder wanted to know the reasons for the asset enhancement initiative (AEI) at Sunway Carnival Mall and its cost. The management explained that they are preparing the mall for future population growth in Seberang Jaya as the area is seeing a lot of new housing developments. The AEI will help Sunway Carnival Mall maintain its leading position and meet the growing demand. The AEI will cost RM300 million (funded by borrowings) and will add 500,000 square feet in net lettable area – doubling the mall’s capacity. The new space will help bring in more established brands and enhance the tenancy mix.

Sunway REIT has showed a commendable set of results despite the soft consumer sentiment and economic uncertainty in 2017. During the AGM, we observed that CEO Dato’ Jeffery Ng looks a capable leader with a humble personality, and shareholders seemed supportive of the new leadership. With the recent acquisition of Sunway Clio Hotel, the reopening of Sunway Pyramid Hotel, and improving office occupancy levels, Sunway REIT looks on track for a solid year ahead.