Malaysian REITs have endured a stormy period in the past 2-3 months since February due to the election fever, rising interest rates, and uncertainty in the global economy. Share prices of almost all Malaysian REITs have dropped around 20% to 40% from their peak last year — especially retail REITs which face intense competition from new malls. CapitaLand Malaysia Mall Trust (CMMT) is one of the hardest hit as its share price fell 46% from a high of RM1.83 to a low of RM0.98. CMMT’s share price has rebounded slightly and is at RM1.08 as at 5 April 2018.

With this in mind, we attended the 2018 AGM to find out more about the management’s plan to weather the storm and continue paying sustainable distributions to CMMT unitholders. Here are 10 things we learned from the 2018 CapitaLand Malaysia Mall Trust AGM:

2. Gurney Plaza recorded a 7.9% increase in net property income (NPI), followed by East Coast Mall at 7.4% — the only two properties to post an increase. Sungei Wang suffered the largest drop in NPI at 39.6%. Overall NPI decreased 2.2% from RM242.4 million in 2016 to RM237.1 million in 2017 mainly due to the fall in gross revenue and an increase in property operating expenses.

3. Portfolio occupancy rate is largely stable even though it fell slightly from 96.5% to 95.4%. The following table shows the occupancy rate for the entire portfolio from 2012 to 2017. Tropicana City Office Tower recorded the lowest occupancy rate of 86.7% but CEO Low Peck Chen assured unitholders that the property will be fully occupied by end-2018. On the retail side, she added that average tenant sales per square foot increased 0.5% year-on-year, and shopper traffic remained stable at 59.0 million in 2017 compared to 59.9 million the year before.

4. 679 leases (43.8% of gross rental income) are due for renewal in 2018. A unitholder asked how many of the leases expiring this year have already been renewed. As mentioned above, Tropicana City Office Tower is expected to be fully occupied by end of this year. The CEO also shared that 25% of leases expiring (based on gross rental income) have already confirmed their renewal and she was confident that 4.5% belonging to anchor tenants would also be renewed. 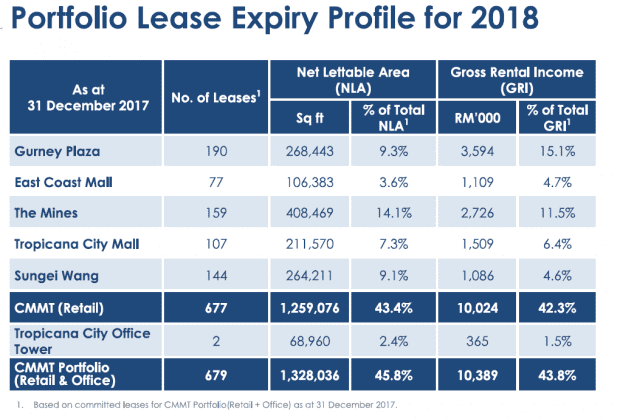 6. CMMT has a healthy gearing ratio of 32.8%. Based on this, the REIT has the debt headroom to borrow another RM1.4 billion to fund acquisitions or asset enhancement initiatives (AEIs). CMMT’s portfolio is valued at approximately RM4.0 billion as at 31 December 2017. In light of rising interest rates, the management has taken the initiative to convert another 8% of borrowings to fixed interest rates. 80% of debt is now at fixed rates. Cost of debt remains steady at 4.4% in 2017 compared to 4.5% in 2016, and average term to maturity fell from 6.8 years in 2016 to 5.7 years in 2017.

7. During her presentation, the CEO shared the management’s plans to rename Sungei Wang to ‘Jumpa’ and reposition it as a place for young, active shoppers and tourists. The mall will adjust its retail mix to include F&B, athleisure, diversified retail, and family entertainment, and improve its façade, interior, and accessibility. The management has set aside RM54 million for the AEI which includes the redevelopment of a five-storey annex block. The redeveloped block will be completed in the first quarter of 2019 and boast a net lettable area of 197,000 square feet.

8. A unitholder asked about Parkson’s exit from Sungei Wang, its impact on NPI, and if the management has managed to secure a new tenant replacement. The CEO admitted that Parkson’s exit had a significant impact on NPI as they previously leased 100,000 square feet of space. At the moment, the loss is mitigated by leasing part of the vacant space to F&B and mini-anchor tenants.

9. CMMT’s 40%+ price drop was a main concern with investors at the AGM and whether DPU would be affected moving forward. The CEO shared that key investors remain supportive of CMMT and the REIT’s fundamentals remained intact – all six properties remain profitable. The CEO added that DPU is not affected by share prices and would depend on CMMT’s revenue and cash flow which she views as sustainable.

10. A unitholder wanted to know CMMT’s occupancy cost ratio and asked if there was an ‘optimal’ occupancy rate that would allow CMMT to raise rents. The CEO said there was no specific rate and rents are based on prevailing market conditions. She revealed she was more concerned about the viability and sustainability of tenants’ business and that they’re able to earn more than enough profit to pay for rent. CMMT’s occupancy cost ratio is in the mid-teens.