The year 2017 marked a significant milestone for Carlsberg as it celebrated 170 years since its very first beer was brewed in Copenhagen, Denmark. The city played host to beer lovers from all over the world as they joined the anniversary celebration that included art exhibitions, beer-infused food pairings, special beer tasting sessions, visits to iconic landmarks and the home of Carlsberg founder J.C. Jacobsen.

On the business end, the Carlsberg group embarked on a seven-year strategic plan known as SAIL’22. In Malaysia and Singapore, Carlsberg Brewery Malaysia Limited aimed to strengthen its market position and continue to deliver a portfolio of brands with an increasing focus on international premium brands.

1. Revenue grew 5% year-on-year to RM1.77 billion in 2017 and net profit grew 10.4% to RM232.4 million. This was mainly due to higher sales in Malaysia, better cost management, and improved performance from Carlsberg Malaysia’s subsidiary in Sri Lanka, Lion Brew (Ceylon) PLC. 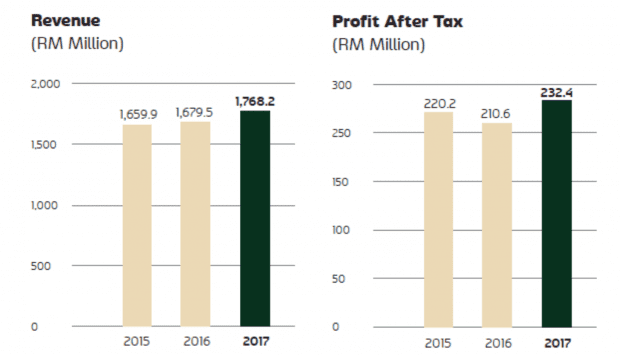 According to managing director Las Lehmann, revenue and profit from operations in Malaysia grew 5.3% to RM1.17 billion, and 10.6% to RM216.4 million respectively. The management is optimistic about the Malaysia market as the authorities continue to curb the sale of contraband beer and protect the legitimate tax-paying beer market. Singapore revenue increased 2.4% to RM597.3 million, but profit from operations fell 16.1% to RM82.6 million mainly due to one-time trade offer adjustments of RM17.2 million. Lion Brew recorded a loss of RM0.2 million, an improvement over its loss of RM5.1 million in 2016.

2. The Minority Shareholder Watchdog Group asked for the reasons for the RM17.2 million trade offer adjustments in Singapore and whether there would be a recurrence in 2018. The management explained that trade offer accruals are based on sales volume, agreed trade terms, and promotional activities with the trade distributors and customers. The adjustment is one-off and there would be no adjustments for 2018. Moving forward, the management will exercise a more vigorous review and reconciliation processes in estimating sales volume to ensure that trade offer accruals are properly calculated and recorded in the financial statements.

Moving on, the management intends to pay a dividend on a quarterly basis and will consider paying a special dividend in the event of surplus cash, after taking into account the future cash requirements of the group.

5. Among Carlsberg’s brands, Carlsberg Smooth Draught recorded the highest volume growth of 91% followed by Kronenbourg 1664 Blanc (44%), Conor’s Stout Porter (42%), Somersby Cider (27%), and Asahi Super Dry (14%). A shareholder asked about the company’s market share for stout drinks in Malaysia and the management answered that the market share is estimated at 20% as their main competitor has a stronger presence in stout drinks. Somersby Cider continues to be the number one cider drink in Malaysia and Singapore, and Carlsberg Malaysia launched two new ciders in 2017: Somersby Sparkling Rose in Malaysia and Somersby Elderflower Lime in Singapore. The company also launched Brooklyn craft beers brands in Singapore and Malaysia to tap on the growing niche demand for craft beer. They introduced Brooklyn East IPA and Brooklyn Layer in draught and bottles during the Singapore Beer Festival, and Brooklyn Brewery in selected bars in Klang Valley in December 2017.

6. To date, there are still two outstanding amounting to RM56.3 million issued by the Selangor State Director of Royal Malaysian Customs on 17 September 2014. The first bill relates to excise duty of RM35.7 million from 1 July 2011 to 14 January 2014. The second bill relates to sales tax and a penalty of RM20.6 million for the same period. There are no new developments on the two bills and the company has mentioned that it doesn’t admit to any liability on them. This matter is currently in discussions with the relevant authorities and legal counsels. In Singapore, the introduction of the European Free Trade Agreement in Singapore by mid-2018 may pose a further challenge for import duties. But in Sri Lanka, the drop in excise duties in November 2017 resulted in higher sales and improved operational performance.

7. The Minority Shareholder Watchdog Group highlighted that the legal drinking age in Malaysian was raised from 18 years to 21 years from 1 December 2017 and wanted to know about any potential impact to the company’s revenue. The management said that they don’t have any data on the 18 to 21-year-old age group and estimate that this group is a small percentage of total sales revenue. Hence, they did not expect any major impact on the company’s revenue.