Since its listing in 2006, FCT has maintained a solid reputation as a well-managed REIT that pays a stable dividend even during tough retail or economic circumstances. As a matter of fact, FCT has an enviable 11-year track record of paying a growing dividend every year.

With this in mind, I decided to attend the 2018 Frasers Centrepoint Trust AGM to evaluate the REIT’s past financial year’s performance, meet the management, and garner their views on the year ahead.

Here are 10 things I learned from the 2018 Frasers Centrepoint Trust AGM.

1. Revenue fell 1.2% year-on-year to S$181.6 million and net property income (NPI) remained flat at S$129.6 million. This was mainly due to the 1.5 year-long asset enhancement initiative (AEI) at Northpoint, FCT’s second largest mall, which caused occupancy levels to fall during the period. The AEI has since been completed in September 2017.

2. Despite the flat revenue and NPI, the REIT paid a record distribution per unit (DPU) of 11.9 cents. Net asset value (NAV) per unit also rose 4.7% to S$2.02. Based on FCT’s share price of S$2.30 as at 30 January 2018, the REIT is trading at 14% above its NAV. Investors look to be assigning a premium to FCT due to its steady DPU and investors’ confidence in the quality of assets FCT holds in its portfolio.

3. Gearing ratio as at 30 September 2017 was 29% – one of the lowest among Singapore REITs. The low gearing was achieved despite FCT acquiring Yishun 10 for S$37.8 million in November 2016. Historically, FCT has kept its gearing below 30% over the last five years.

4. FCT owns a 33.15% stake in Malaysia-listed Hektar REIT which owns six retail malls in Peninsular Malaysia valued at RM1.2 billion. In Singapore dollar terms, FCT’s stake in Hektar accounts for around 3% of its total portfolio. FCT has been a shareholder of Hektar since 2007 and is the REIT’s only international investment so far. CEO Dr Chew Tuan Chiong shared that FCT’s investment in Hektar has allowed them to ride on the growth in Malaysia and learn more about its retail market. He revealed that FCT could expand directly into Malaysia in the future but added that the management would like to understand and master the market better before taking a bigger plunge.

5. According to Dr Chew, good suburban malls of reasonable size are tightly held and difficult to acquire, which is why he feels ‘fortunate’ to acquire Yishun 10. FCT acquired the retail podium of the property which sits at the corner of Northpoint City. 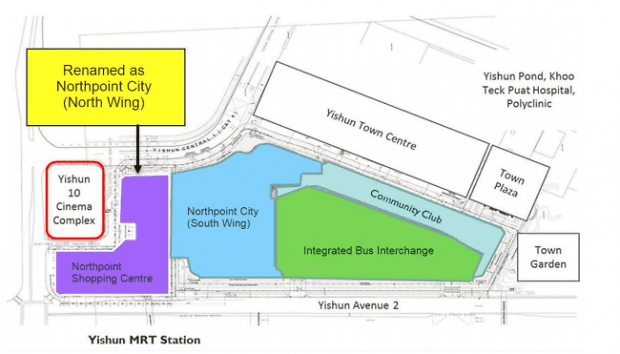 He added that Yishun 10 is of strategic value as it gives FCT the option to amalgamate the lot and expand Northpoint City in the future. The acquisition, in essence, is a landbank which also generates revenue in the meantime.

7. The FCT portfolio recorded a 5.1% gain in average rental reversions. Even though reversions were positive, Dr Chew highlighted that this was the lowest ever since FCT’s listing. The last three years have been tough for the local retail sector and FCT has to ride out the tough times as best they can.

8. A unitholder raised his concerns about Bedok Point which has been underperforming for a number of years and wanted to know the management plans for the property. Dr Chew explained that the ‘centre of gravity’ in Bedok Central revolves around the Bedok MRT station. Because of this, Bedok Mall (owned by CapitaLand Mall Trust) which sits right next to the MRT enjoys higher visitor footfall. In comparison, Bedok Point is located a fair distance from the MRT, which is why it’s important that the tenant mix for the mall is rightly positioned to capture the crowds that do pass by. Chairman Philip Eng revealed that the management is ‘looking at all angles’ regarding Bedok Point which includes the option of divestment.

9. Another unitholder asked why FCT only had 55% of its borrowings at fixed interest rates when rates were expected to go higher. Dr Chew replied that FCT’s low gearing allows for more flexibility and that it’s important to also take into account the cost of hedging. He explained that hedging is important when you can’t afford interest rates to run away overnight. In any case, FCT has a policy of having at least half its loans pegged at fixed rates and will continually monitor for the right time to hedge its borrowings.