OCBC Bank is the longest established Singapore bank. It was formed in 1932 from the merger of three local banks, the oldest of which was founded in 1912. OCBC has a presence in key markets such as Singapore, Malaysia, Indonesia, and Greater China. It has 590 branches and representative offices in 18 countries and regions. As of 31 December 2017, it has total assets of $455 billion.

When you attend several AGMs in the space of two weeks, it is very easy to lose track of where you are. Before I knew it, I found myself back at the Marina Bay Sands Grand Ballroom.

I thought to myself, “Could this be déjà vu all over again?”

It was not until I heard someone in the background complaining — “Why did you increase the dividend by only one cent compared to the two other local banks?” — that I remembered I was at the 2018 OCBC annual meeting. The second largest Singaporean bank had the lowest dividend increase this year.

As shareholders, we always expect more when the company makes more – a ‘win-win’ situation. However, that is not always the case. For management, the definition of winning can be somewhat different. The management’s job is to allocate capital efficiently — finding a balance between retaining enough capital for growth and distributing excess capital in the form of dividends, while managing shareholders’ expectations all at the same time.

In OCBC’s case, Chairman Ooi Sang Kuang explained that the bank’s dividend policy is to ensure a sustainable and predictable dividend payout and a consistent level of dividends that does not fluctuate with performance. This means you can expect a higher payer ratio when profits are lower and vice versa. You can see from the chart above that OCBC’s dividend payout ratio fell from 43% to 37% as net profits increased by 19% this year.

With that said, there’s no right and wrong policy when it comes to dividends. The most important thing is whether the management is consistent with their actions, and whether their dividend policy is in line with your expectations. If not, with so many other companies out there, I’m sure you will find one that fits you perfectly.

So if you’re an OCBC shareholder, don’t be too depressed about that one cent raise. I’ll do 800% percent better by sharing with you eight things I learned from attending OCBC’s 2018 AGM: 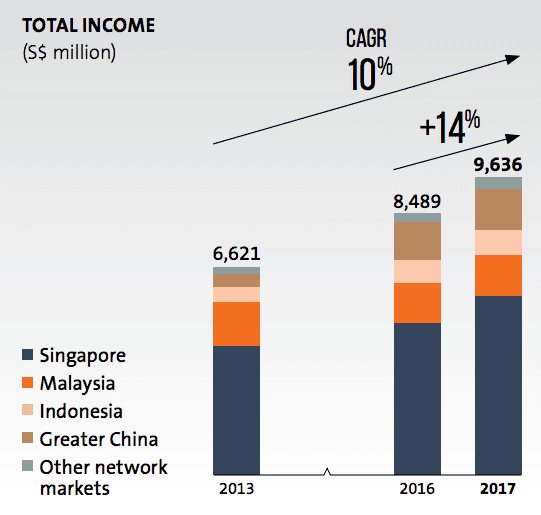 2. Net profit after tax increased 19% from $3.47 billion in 2016 to $4.15 billion in 2017. The result was driven by strong performance across OCBC’s commercial banking, wealth management, and insurance businesses. The directors of the bank recommended a final dividend of 19 cents per share, bringing the full-year dividend to a total of 37 cents. 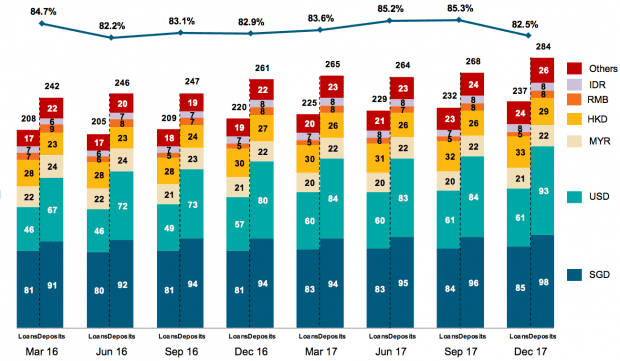 5. A shareholder asked if the 45% increase in wealth management fees and commissions was due to the acquisition of National Australia Bank (NAB) or the sale of debt and equity securities as reflected in the cash flow statement. The chairman said that the acquisition of NAB consisted of mortgage loan portfolio and not its wealth management business. The strong performance was actually attributed to organic growth; Bank of Singapore’s (OCBC’s private banking arm) assets under management grew by 25% in 2017. CEO Samuel Tsien explained that the sale of debt and equity securities shown in the cash flow statement has nothing to do with the private banking business. Assets belonging to private banking clients are separate from the bank’s and recognized under assets under management.

6. A shareholder asked why OCBC’s return on equity (ROE) has been declining since 2014 and what to expect in the future. The CEO said that in 2014, the bank was under a different capital regulatory regime prior to the implementation of Basel III, which requires a significant increase in capital to be set aside. Nonetheless, OCBC’s ROE increased from 10% in 2016 to 11.2% in 2017. As for the future, assuming no significant volatilities, the bank’s ROE for 2017 will be a good target to exceed.

7. A shareholder noted that non-performing assets increased significantly from $600 million in 2016 to $1.2 billion in 2017 for the transport, storage, and communication sector. He asked if this was mainly due to the oil and gas sector and, if so, the impact going forward. The CEO said the exposure to the oil and gas has been contained. The development of the portfolio is highly dependent on vessels and chartering opportunities. So far, the increase in oil prices hasn’t resulted in the increase of charter rates, which would have enabled companies to generate cash flow and pay down their loans.

8. A shareholder asked about the bank’s vulnerability to fintech disruptions from non-financial institutions. The chairman said the bank has been monitoring the threat of fintech closely. Furthermore, the bank established a fintech unit to work with startups, and develop ideas for strategic projects and new applications.  Addressing the concern of Alibaba’s entry into the Singapore market in the near future, the chairman assured shareholders that the board was well aware of such developments, its implications on the banking business, and the proposed responses to such threats. The bank is building a platform of fintech applications to create an ecosystem of its own.