Suntec REIT is currently on our watchlist, and I attended the annual general meeting to evaluate its past year’s performance and its plans for the year ahead.

Here are seven things I learned from the 2018 Suntec REIT AGM: 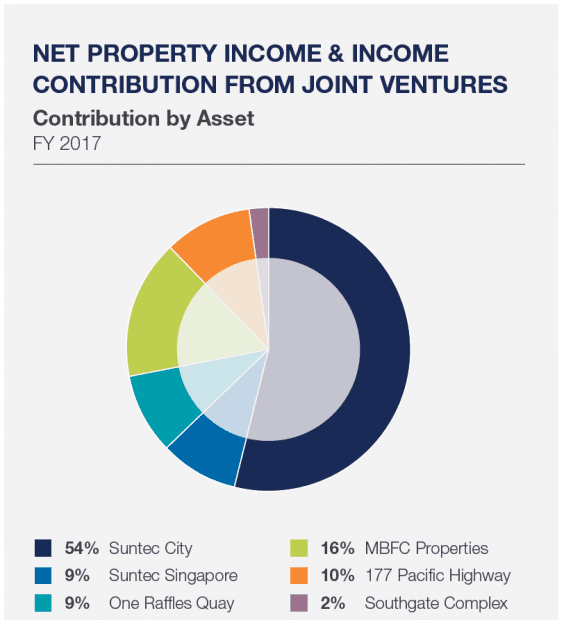 3. Suntec REIT posted strong portfolio occupancy rates is for both its office (99.2%) and retail (98.8%) segments. Its largest property, Suntec City, recorded 99.5% and 99.0% occupancy rates for its office and mall segments respectively. In 2017, Suntec City mall saw 45 million people walk through its doors and the convention centre hosted over 1,600 events. Weighted average lease expiry for the overall retail and office portfolio are 2.35 years and 3.80 years respectively.

5. Suntec REIT made its second acquisition in Melbourne in 2017 when it acquired a 50% interest in 477 Collins Street for A$414.17 million. Suntec REIT’s partner, Mirvac Group, owns the remaining 50% interest and will provide a five-year rental guarantee on any unlet space. The freehold property is located in Melbourne’s central business district is currently under construction and will become a 40-storey premium-grade office building when completed in mid-2020. Deloitte has already pre-committed 39% of the building’s space for its Melbourne headquarters.

6. A unitholder noted that Suntec’s REIT overall tenant retention ratio for 2017 was 64% and asked if the management had aims to increase it to 80-90%. CEO Chan Kong Leong explained that an extremely high ratio is not advisable for the retail segment as consumer tastes change rapidly and a mall has to constantly update its retail mix to remain attractive to shoppers. In the office segment, he shared that tenants with a large lease have higher bargaining power to demand lower rents. But the management has to evaluate whether it makes sense to accept a lower rent to retain the tenant. At the end of the day, it is important for the management to be guided by the fundamentals and what is best for unitholders, and not to simply reach a high tenant retention ratio.

7. Another unitholder (rather brusquely) demanded to know why the management hadn’t decided to invest in China. Chairman Chew Gek Khim calmly explained that there are various reasons to invest in any particular country. But the board has decided on Australia because it has yielded good results so far and the country boats a safe government, political stability, good quality buildings and long lease tenures among other reasons.