The share price of Tune Protect Group Berhad has nearly halved from a year ago; it was trading at RM0.80 when I attended this year’s AGM in June. Unfortunately, it’s even worse for those who got in at the IPO price of RM1.55 back in 2013. Such a significant drop in share price can be depressing for those who invested their hard-earned money in the company.

At the start of the annual meeting, I witnessed a shareholder, who is also a former director of a general insurance company in Malaysia, voice his unhappiness to the board, “Your share price has been disappointing… It has been sliding… It is ‘out of tune’. [not sure if the pun was intended.] My assessment is, over the years, you have not done well.”

Tune Protect’s underperformance last year was partly caused by a higher net claim ratio and management expense ratio which resulted in a higher overall combined ratio. As a result, Tune Protect’s net profit for 2017 declined to a multi-year low of RM50 million. 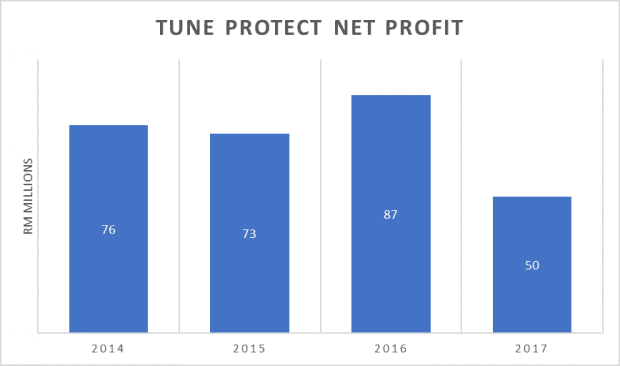 Chairman Ng Siek Chuan assured investors that the management was taking many initiatives to fix the issues. In fact, they are also unhappy with the past year’s results as the combined ratios from both fire and motor insurance were worse than the industry average.

Combined ratio by segment for FY2017.

Aside from the relatively high combined ratios in fire and motor insurance, Tune Protect’s underperformance was mainly due to changes in the regulations imposed by the Malaysian Aviation Commission (MAVCOM) which affected the take-up rate of travel insurance. The new regulation restricts airline companies like AirAsia from automatically adding travel insurance (offered by Tune Protect) to their travellers’ order. As a result, the number of policies issued in the first half 2017 by Tune Protect fell 27% as fewer customers opted for travel insurance when they bought an air ticket from AirAsia. 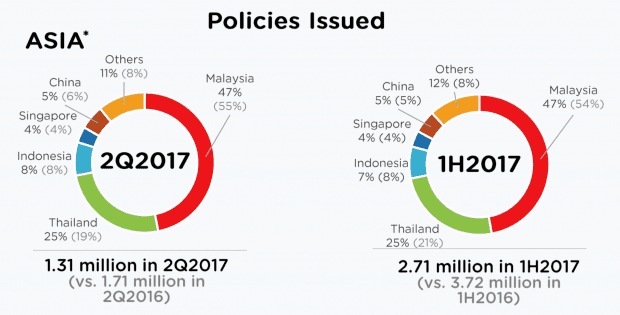 The company has since embarked on a number of initiatives to reverse the fall in travel insurance policies. Among the initiatives are:

The management also introduced dynamic pricing in five countries — Malaysia, Brunei, Cambodia, Myanmar, and Laos — to improve the take-up rate of travel insurance. There were also several other initiatives such as improving customer experience and offering product innovation through mobile apps.

While Tune Protect CEO Razman Hafidz Abu Zarim and his team are working hard to improve the combined ratio and the take-up rate for travel insurance, there are those who are more understanding towards the situation. My friend and fellow investor, David, is one of them. He gave a few encouraging words at the meeting to the management, “I know things are tough for the industry right now but please don’t give up. You have our support. In term of share price coming down, we see it as opportunity to own more shares.”

Datuk Kamarudin, co-founder of AirAsia and Tune Protect, also broke his silence as he tried to address shareholders’ concerns on the falling share price, “I’m sad to see the share price go down. We, collectively with AirAsia, own almost a 30% stake in Tune Protect. So we share similar concerns as you… If not for the compliance of share restrictions that is limiting us, I will be out there buying the shares.”

Having said that, Kamarudin highlighted the difficulty Tune Protect has in trying to reach to consumers directly. He believes that the company has good insurance products, but consumers do not know where/how to buy them. Another major issue is that AirAsia passenger volume has grown considerably, but the number of travel insurance policies issued hasn’t kept pace very well. From my observation, the management is doing its best to overcome these challenges. Kamarudin was very candid with his answers about the issues facing the company. Despite the challenges, he is still optimistic about Tune Protect’s future and asked shareholders to give them some time to see the initiatives bear fruit in the next few years.

Here are eight more key points I took away from the 2018 Tune Protect AGM:

1. Tune Protect targets to improve its combined ratio to 85% by 2020. The management has taken initiatives to improve the ratio by reviewing its pricing strategies and underwriting terms, and improving its cross-selling and claims operational efficiency. If the management achieves their target over the next three years, it will be a great improvement from the current combined ratio of 94% in 2017.

2. AirAsia contributed around 60% of Tune Protect’s bottom-line in 2017. As Tune Protect was appointed by AirAsia to manage their insurance-related products, it is not surprising that Tune Protect relies heavily on AirAsia to sell its travel insurance. The reliance, however, has been trending down (in terms of proportion) over the years as the company has ventured into general insurance, direct selling to consumers via TuneProtect.com, and partnering with other airlines.

3. Tune Protect distributes travel insurance through other airlines such as Cebu Pacific, AirArabia, Cambodia Angkor Air and, recently, Wataniya Airways. Tune Protect is also allowed to work with AirAsia’s competitors to create a win-win situation. This is a huge plus point as it allows Tune Protect to expand its distribution network. Obviously, no confidential data is shared between the airlines as some of them compete directly with one another.

4. Tune Protect intends to spend RM25 million over the next three years to become a leading digital insurer. The Minority Shareholders Watch Group wanted to know the breakdown of the company’s digital spending and the management stated that the budget will be spent on investment in technology, personnel, e-tools, InsurTech capabilities, and digital marketing.

5. Contract and insurance payables (free float) hit a record high of RM717 million in 2017, but its investment yield was a record low of 3.5%. This is an area where I believe the board should spend more time and, if necessary, revisit their investment mandate as the float has been earning relatively low returns over the last few years. I think there is large untapped potential for Tune Protect to earn a higher return as the management seems to focus only on the core underwriting insurance business.

6. The take-up rate for travel insurance averaged 14% for 2017. It is a good improvement as the take-up rate was in the single digits in the first half of 2017 after MAVCOM enforced the opt-in ruling. Without the bundling initiative, the result could have been worse for 2017. The management deserves big credit for turning things around despite the poor results initially.

7. No share buyback is in sight as Tune Protect’s cash balance dropped to RM7.5 million in 2017 from RM24.0 million in 2013. A shareholder suggested that the company consider buying back its shares as the price has come down quite significantly, but the chairman explained that Tune Protect doesn’t have the financial resources to do so.

8. Tune Protect seems to have high leadership turnover with two CEOs leaving since its listing. Razman, previously the chairman, eventually stepped in as the CEO after Junior Namjick Cho abruptly resigned as CEO in 2016. There wasn’t any mention about the sudden change of CEO in the annual report. My friend, Lawrence, was eager to find out why the company has such a high CEO turnover and how changes in leadership will affect the company’s business execution moving forward. To his dismay, the board seemed to dodge his question and assured investors they are not expecting a change in CEO again.