Living in Singapore, cleanliness has always been our claim to fame. Ask any of your friends visiting from overseas and the first comment that we get is usually: “Wow. Singapore is so clean!”

This is all thanks to the clean and green campaign and good urban planning by the powers that be. Getting rid of rubbish has never been a problem for us. There are dustbins everywhere as we walk down the street and all of us probably have a bin at home lined with a plastic bag that we fill up as we go through the day. And just before we go to bed, we tie up that plastic bag, walk over to the rubbish chute, and dump it down. No matter which floor we stay on, it always works! For all this convenience, we only pay $8.25 per month!

However, not many of us know what happens to that bag of rubbish after it falls down the chute or goes into the green bins we are so familiar with. Depending on which part of Singapore you live in, different public waste collectors (PWCs) will serve your sector. Out of the four PWCs that serve us, three of them are listed companies on the SGX: SembWaste — which is a subsidiary of Sembcorp Industries (SGX:U96), Colex Holdings (SGX:567), and 800 Super (SGX:5TG). The last PWC is Veolia ES which is listed on the Euronext Paris exchange.

These PWCs collect the rubbish from the compactors located at each block and bring the waste to the incineration plants. The waste is then incinerated into ash which will then be shipped to Semakau Landfill. During incineration, energy is produced and sold back to the grid.

Here are some reasons why rubbish collection might not be so ‘rubbish’ after all:

As with all things, there is bound to be the flip side as well:

With all the pros and cons of the business being said, let’s look at how much we would have made if we invested in 800 Super and Colex Holdings in 2010 and held it until today. I’ll leave out SembWaste as it constitutes just a small part (<5%) of Sembcorp Industries.

At the Fifth Person, we believe that over the long run, the stock market is a weighing scale and reflects the true value of a business. So let’s take a deeper look at the numbers making up the business. 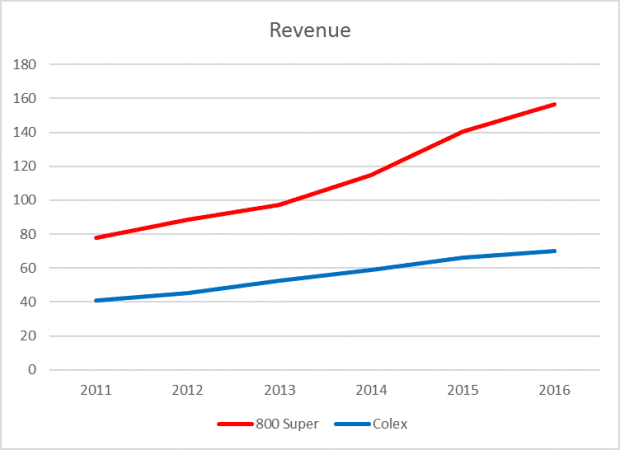 Looking at revenue over the past six years, it can be seen that 800 Super and Colex are both resilient in nature as we discussed above. Despite various market uncertainties, both companies have been able to grow their revenues at a pretty decent pace. Using compounded annual growth rates (CAGR), 800 Super was able to grow at 15% annually and Colex at 11% annually. 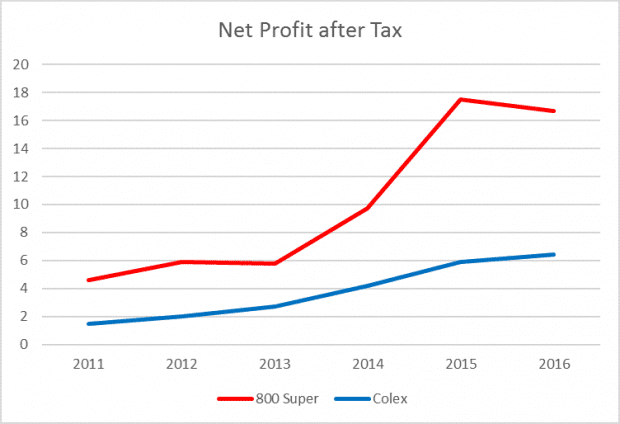 Net profit after tax has grown in line with revenue. In fact, comparing 2011 vs 2016, both companies have been able to increase their net profit by over 400%! 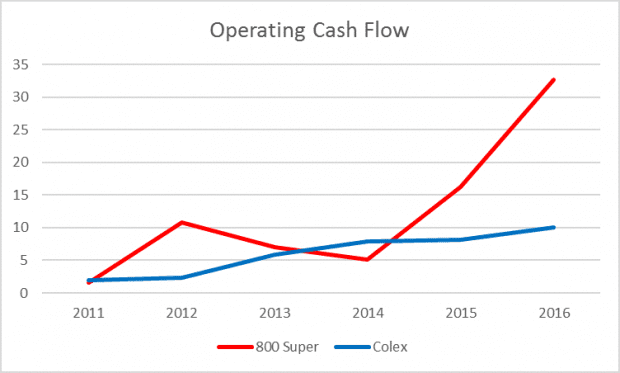 The operating cash flow chart is not as nice and linear as the previous two charts but both companies have been able to be cash flow positive for all six years. 800 Super faced a dip in 2013 and 2014, but digging into the numbers, this was due to a larger receipt of trade and receivables. 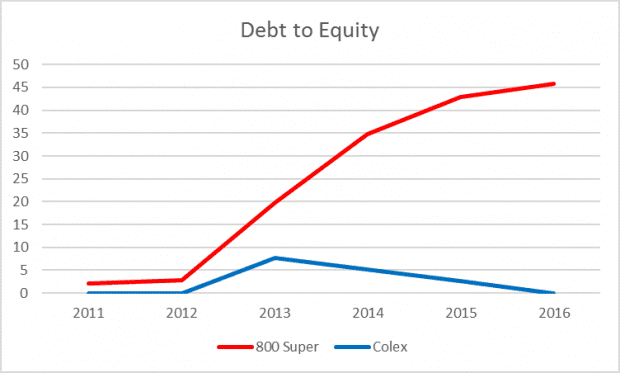 This is the one chart where the lower the numbers, the better. Even with the high amount of cash flow from operations as seen above, 800 Super is still taking on loans. With a debt-to-equity ratio of 0.65, the company is pretty highly leveraged. One thing that investors must ask the management is how they plan on handling this debt and why is there a need for this high amount of debt in the first place.

Colex, on the other hand, shows very prudent management. Management has shown that it is willing to take on a certain amount of debt in the past, but this debt was paid off in a reasonable amount of time and company is now debt free. This means that the company is in a net cash position and as an investor, I always prefer a net cash company over one that is highly leveraged. 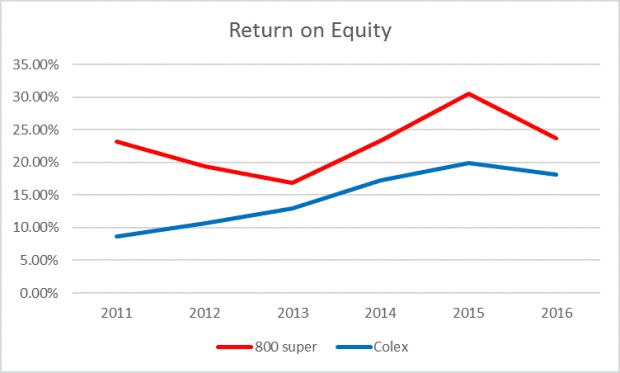 Companies with a return on equity (ROE) between 10% to 15% (or higher) always draw interest from me. Colex had been showing steady growth in their ROE but has taken a dip recently. We will need to monitor if the ROE can be maintained at above 15%. ROE numbers for 800 Super look nicer, however, this is inflated due to the large amount of debt on their books.

Looking forward, both companies should still be able to grow linearly with our population growth. With the Paris-Tampines and Bedok sectors coming up for bidding in 2018, the company that gets this contract will get a definite boost in revenue and earnings. However, cash will be required to purchase vehicles and build the depot for the new sector. Investors should always be mindful of how the company raises this cash –we wouldn’t want to be diluted with placements and we also wouldn’t want the company to be over-leveraged. 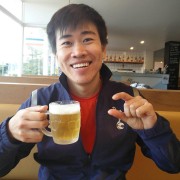 Enqi is a chemical engineer by training and a fundamental investor by nature. Being an engineer first and an investor second has helped Enqi develop a more analytical mindset, be much more prudent and less trigger happy. He was the second runner-up for InvestIdol 2015 organised by ShareInvestor. His personal idol is Elon Musk, a visionary entrepreneur that relies on 'first principles thinking' to solve some of the world's greatest challenges. Applying first principles to fundamental analysis is the aim that Enqi is striving for on his journey to becoming a better investor.