If you’ve downloaded and read our report on how we made 243.5% returns in two years investing in Super Group (SGX: S10), you’ll know the exact reasons why we decided to sell our stake in June 2013 even though Super’s stock price then was on a bull run; trending higher and higher. 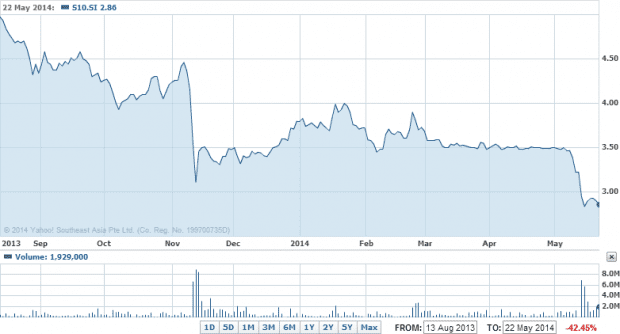 What caused this “super” free fall? (I just had to pun…)

Well, Super’s stock price has fallen because the company failed to meet analysts’ earnings estimates causing them to downgrade its stock, spooking investors who are selling the stock in the process.

Why Have Super’s Earnings Taken Such a Hit Over the Past Year?

Is This an Opportunity?

Even though Super’s stock price has been on a tumble recently and looks tempting compared to its previous highs, at the current price levels I would still rather sit on the fence and wait.

But if Super meets these two criteria I might consider investing in the stock again:

At the moment though, things don’t look as if they’re turning around any time soon – especially with the recent developments in Thailand, so let’s just wait and see how things pan out in the next few months or so.