In 1993, Patrick J. Cusatis, James A. Miles and J. Randall Woolridge did a research study on the stock performance of spinoff companies from 1963 to 1988. From the research, they found that spinoffs outperformed the S&P 500 by about 10% per year in the first three years of their independence. The study also found that parent companies of spinoffs also outperformed the index by more than 6% per year for the same three years.

A 1999 McKinsey study researched the performance of spinoffs between 1988 and 1998 and showed that spinoffs gave shareholders 27% annualized returns over two years vs. 17% for the S&P 500.

The Guggenheim Spin-Off ETF, which is based on the Beacon Spin-Off Index, has also generated a return of 384% since the March 9th 2009 bottom compared to 203% for the S&P 500 in the same time period.

It looks as if investing in spinoffs are a great way to boost your investment returns in the short term!

Spinoffs are a form of corporate restructuring where a parent company, usually a conglomerate, decides to separate a subsidiary business as a new independent entity.

Post-spinoff, shareholders now own shares of the parent company and the spinoff (Subsidiary B). The spinoff will have its own management team and board of directors, different from its parent company. 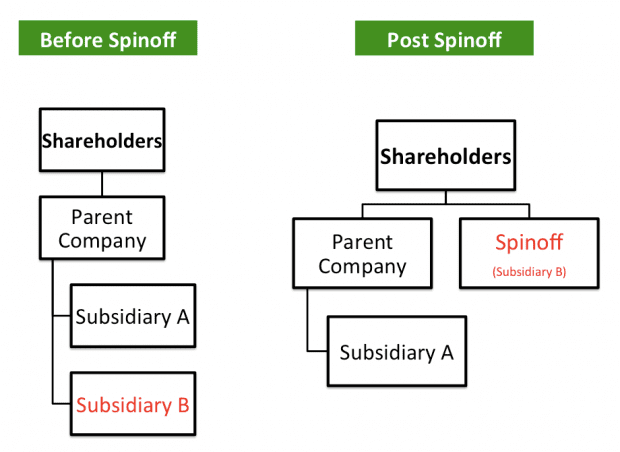 The scenario we described above is what we called a regular spinoff where 100% of the spinoff’s shares are distributed to shareholders of the parent company. But there are cases where management does a carve-out or split-off.

A carve-out happens when a parent company decides to sell a full or partial stake in its subsidiary to the public through an IPO. Unlike regular spinoffs, carve-outs raise fresh capital (cash) since shares are sold to the public via its IPO.

Why Spinoffs Outperform the Index in the Short Term