Singapore has one of the world’s highest smartphone penetration rates (I mean, look at how fast Pokémon Go caught on here) and the vast majority of us have internet connectivity. Similarly, many of our local brokers also offer easy access to invest in a plethora of foreign markets.

Singapore’s market is naturally where we would start our investing journey and many of us trade or invest in companies listed on the SGX. However, consider the size of Singapore’s market; like the country itself, it’s puny compared to other financial centers we actively compete against.

Our total market capitalization as of June 2016 is about S$898 billion, it sounds like a lot but Apple’s market cap alone sits at around US$579 billion (S$780 billion) and that’s just one stock. It’s an unfair comparison but it just illustrates how small we are compared to the behemoths out there. We will probably never have a company that will ever reach a market capitalization of the giants listed in the United States, United Kingdom or China — but that’s okay. There’s only so much a local company can grow in a small country of 5 million people and only so much a local company can sell in an economy where annual GDP stands at around S$700 billion.

Singapore is already punching above its weight in the global arena when it comes to metrics measured on a per capita basis. However, absolute size is what truly matters for a company to grow ten or even hundred-fold. For illustration, let’s look at some examples of multi-baggers from Singapore and the U.S.

Singapore has had a few legitimate multi-baggers over the years like VICOM and even Singtel. (All charts from Google Finance.) 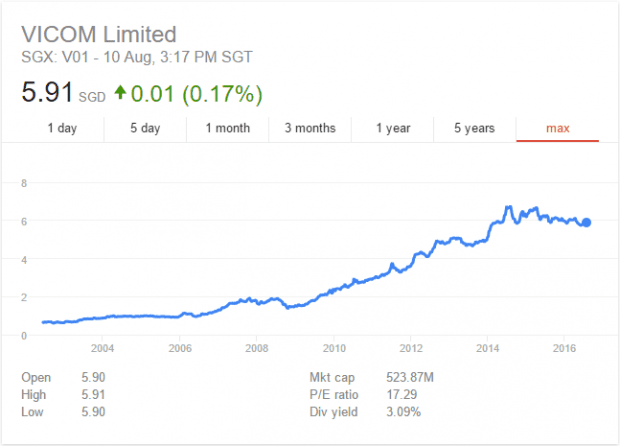 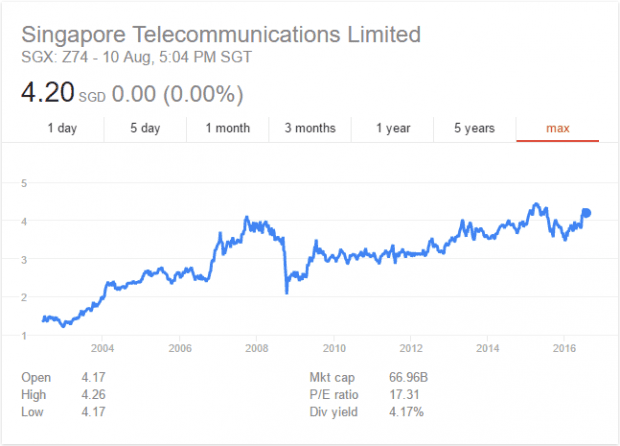 Penny stock multi-baggers aren’t considered as the comparison will then be skewed in favor of American markets with endless biotech or marijuana stocks surging multifold in a matter of days.

There’s an endless list of U.S. large-cap stocks I can use as examples but let’s take the really big companies to illustrate. Here’s Amazon, at a current market cap of US$366 billion. 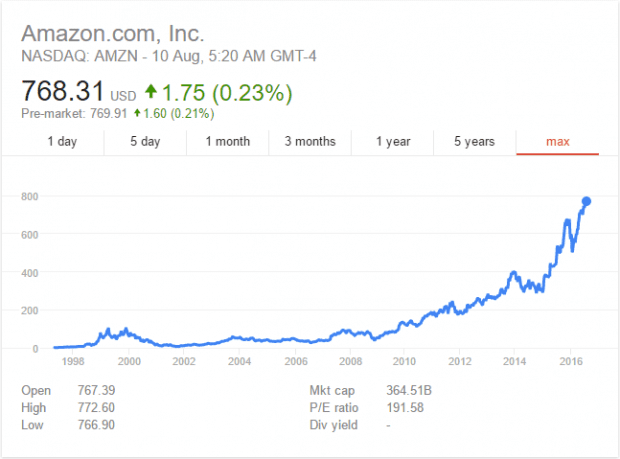 “Hockey stick” returns are extremely rare, if not impossible, to find in Singapore large-cap stocks but are quite common in the States — although they tend to be concentrated mainly in the technology sector. For another example, take a look at the currently embattled Netflix’s run-up over the years. 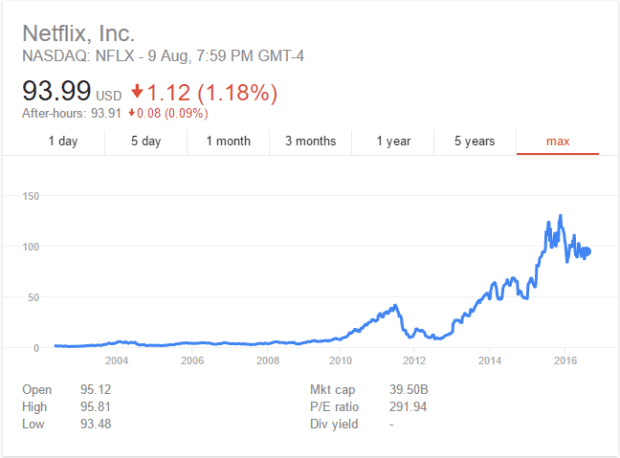 Although the chart isn’t as beautiful as Amazon and Apple’s (I’d leave that to your imagination), it still gave investors tidy profits.

Moving away from the technology sector, let’s take a look at two companies with large moats that I mentioned recently: Visa and MasterCard. They are just credit card companies, aren’t they? Not too exciting; just swiping and collecting fees. Take a look at their recent run-up as well: 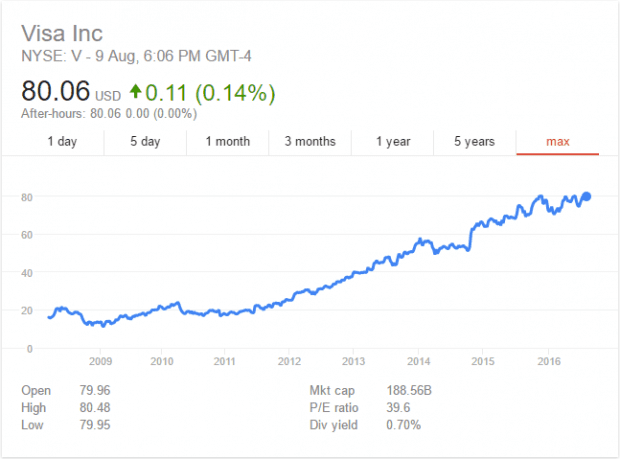 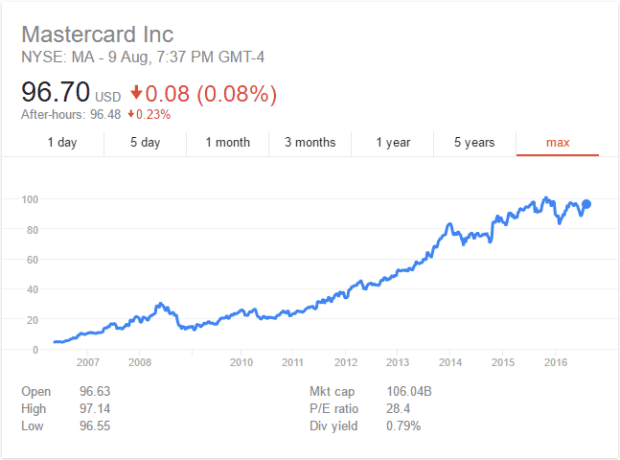 Visa and MasterCard have given investors steady and tidy profits over the years, compounded by huge buybacks and consistent dividends.

Mind you these are multi-billion dollar companies, not million dollar micro-caps that jumped tenfold to a hundred million. That’s the key difference between our markets and large markets like the States – the runway for growth.

At roughly S$60 billion in market cap, can Singtel double in the next few years? A large portion of their revenue is already overseas, so the runway for growth should still be there, but is it a realistic outlook?

How about StarHub? It’s a pure-play telco in Singapore with about S$6 billion in market cap. Can it grow tenfold to reach Singtel’s size? What does it have to do to increase its earnings and revenues at least tenfold? Is there still a runway for growth in the Singapore telco market? It’s highly unrealistic to assume StarHub can grow this way unless it ventures overseas, which also makes it a riskier bet as the telco industry is highly competitive, capital intensive, and regulatory headaches would be at every corner.

If you’ve read many investment journals, books or websites, they tend to be American and might not provide a useful context in Singapore’s market. Many of them talk about expansion to new markets and by new markets they could mean other cities or states within the U.S. and not global expansion. The State of California alone has about 38 million people, more than the entire population of Canada. Texas has 27 million and New York City alone has about 8 million. These states/cities have economies that are bigger than countries; California’s GDP is bigger than that of France! The U.S. is perhaps one of the very few developed economies with an above-average population fertility rate, compared to tepid Singapore where the government is actively trying to push for more immigrants to boost the economy.

It’s, therefore, realistic to assume that Singaporean companies that remain in Singapore can’t grow as one would like to imagine, considering Singapore is already a developed economy. Therefore the “large-cap” stocks that have concentrated revenues derived from Singapore are merely big fishes in a very, very small pond. 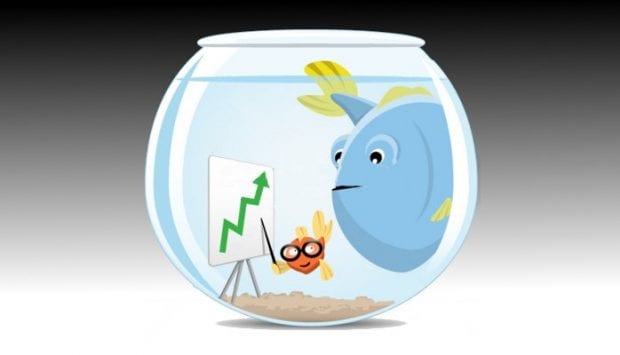 So naturally, many companies here would then seek growth opportunities outside of Singapore. Southeast Asia alone is home to about 600 million people; if it were to be a country, it would make it the third most populous in the world. The only caveat would be the act of venturing outside of one’s home turf – it doesn’t necessarily mean it’s going to be the same in terms of culture and consumer tastes for a company’s product or service. Regulations would be vastly different and regulators themselves may not be as friendly as one might hope.

The recent troubles in Brazil greatly affected Keppel and Sembcorp Industries due in part to OPEC’s price war with the Iranians and American shale oil companies. It’s not all roses and sunshine when it comes to venturing overseas as it raises the risk of failure. But without venturing out, it’s impossible to grow organically to a large size in Singapore. Unless you’re Facebook and have no qualms getting the equivalent of China’s entire population on your network in less than a decade, it’s going to be an uphill battle.

Successful stories of Singaporean companies dominating overseas have so far been highly limited to only a handful of companies. Instead of waiting for say a VICOM to corner the vehicle inspection market in China, why not look at the existing companies there? They would probably have a dominating market share and a multitude of industry insiders and government connections to help them, creating a barrier of entry to foreign competitors. It’s tough to find existing Singaporean public-listed companies sans Creative Technology (they failed anyway…) that managed to successfully create a moat that can remain strong in global markets. Yoma Strategic is one example of a Myanmar-play listed locally which is worth a look but the stock has already run-up in the Myanmar mania circa 2012.

With easy access to global markets from the comfort of your home and with Google at your fingertips, there’s simply no excuse for not wanting to venture overseas. Commissions and fees will vary more widely as it’s a more competitive market out there for retail investors than it is for Singapore (nearly all brokerage firms here offer the same commission rates). There are so many other companies and whole industries out there that do not exist in Singapore’s market – social media, automobiles, solar, pharmaceuticals, etc.

It’s a large ocean out there and it pays to pay attention to the developments of the world especially in highly disruptive industries. Like what Apple spawned that created a more realistic and cheaper model of music and entertainment (iTunes) that led to the death of HMV and Tower Records, staying isolated in this very small pond (Singapore) without watching for disruptive forces in the global markets is akin to investing in Creative Technologies thinking that nothing out there can disrupt it.

It’s also an exciting world to explore – with my earlier articles on large “moaty” businesses that have given investors a high rate of return over the years.

If you want the government to privatize the ERP because of its toll-like system and monopoly in Singapore, you can look for something like China Merchants Holdings Pacific (sadly they are in the midst of a buyout), or similar-modelled businesses like Visa or MasterCard.

If you want a testing and inspection company like VICOM but with a larger catalyst for growth, you can look at Intertek. The Brexit has thrown the UK into a disarray and with regulations also in question, Intertek may be poised to gain from new regulations (instead of current E.U. regulations) from the UK government.

I can pluck many more examples but I’m going to leave that arduous but exciting task to you. You may find companies that offer products and services that you never thought would exist or offer something that make you go: “Why isn’t this a thing in Singapore?”

Why fish for ikan bilis (anchovies) in Singapore when you can reel in a whale in America?