If you’ve ever walked into an exhibition at Suntec City and admired some of the huge exhibition booths on display or stepped into a nice, newly renovated store of a major retail brand (like Uniqlo above), chances are Kingsmen Creatives was the company behind all that work.

Kingsmen Creatives Limited (SGX: 5MZ) provides interior design work and fitting-out services for exhibitions, trade shows, museums, retail stores, and corporate properties. The company was founded in 1976 and employs over 1,600 employees across 19 offices worldwide. It is headquartered in Singapore.

Since the Global Financial Crisis of 2008/09, Kingsmen Creatives share price steadily increased and hit a peak of $1.055 in May 2015. Since then, however, the stock has dropped 40% over the last year to 63 cents (as at 29 July 2016). Is there an investment opportunity in Kingsmen Creatives at this share price and can the company turn itself around amid a slowing economy and tough retail environment?

Here are 4 things you need to know about Kingsmen Creatives Limited:

Kingsmen Creatives recorded $0.88 million in losses for 1Q2016 despite revenue increasing by 18.4%. The loss was mainly attributed to two factors. Firstly, gross profit margin decreased from 27.4% to 21.8% q-o-q due to a lower average selling price from their Retail & Corporate Interior segment. Secondly, operating expenses increased because of higher depreciation and interest expense due to their newly acquired factory in Malaysia.

2. Dividend per share dropped for the first time in 12 years 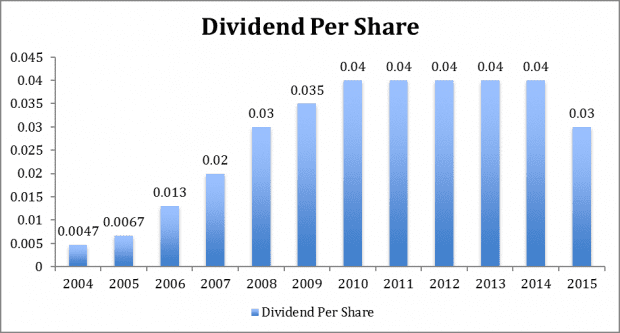 Kingsmen Creatives has a history of paying consistent dividends to shareholders. Based on the chart above, dividend per share increased every year from 2004 to 2010 before stabilizing at $0.04 thereafter to 2014. FY2015’s dividend per share is the first time in 12 years where it has dropped.

If you read Kingsmen Creatives’ annual reports, you will realize that management has always been optimistic about the following year’s outlook. But in its latest annual report, the management mentioned that they are cautiously optimistic about the outlook for its various business segments for FY2016, which may be the reason they reduced the dividend in order to bolster the company’s cash position to navigate the challenging times ahead.

3. Kingsmen Creatives is in good position to ride through a challenging period

Even though the management is cautiously optimistic about the outlook, Kingsmen Creatives shouldn’t have an issue tackling the tough times ahead because of the net cash position that they have built up through the years. Based on 1Q 2016 results, the company currently has a net cash position of $56.6 million which is about 45% of its total market capitalization of $123.8 million. With this, in fact, I think they are in good position to protect their economic moat or acquire some companies during the challenging times to improve their business.

4. The company is buying back shares 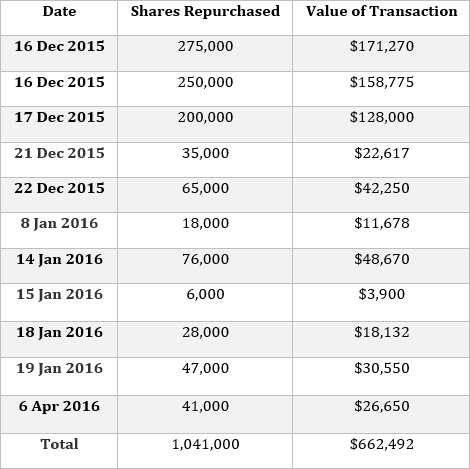 The company has been buying buy its share from December 2015 to April 2016 after its share price fell from a high of $1.055. The total number of shares repurchased is 1.041 million shares which amount to $0.662 million. This gives them an average buyback price of $0.636 per share.