Looking at the roaring performance of the S&P 500 since the financial crisis, it has certainly been a great half-decade with the index outperforming hedge funds as a whole and leading the world out of a deep recession that would otherwise have caused another depression if not for the Fed stepping in. 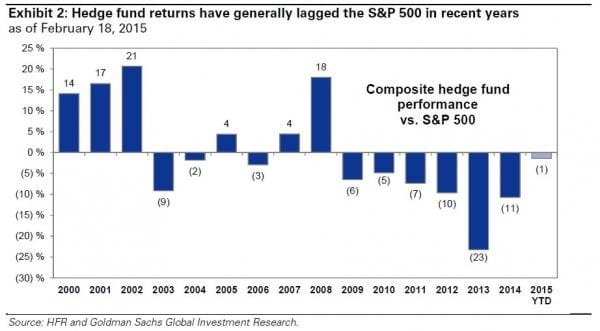 The arguments on the topic of asset managers’ failure to outperform the market index can be saved for another day, I’m going to talk more about the S&P 500 index itself, and why I think it may have run out of steam.

Referring to another article on The Fifth Person – 5 Reasons Why I’m Bullish on the U.S. Economy and the S&P 500 ETF; the five reasons are valid and shows a general trend of an improving American economy and I agree with them, but I would like to present, in my opinion, four other reasons that prove otherwise. It’s always in an investor’s best interests to think of the downsides to protect their wealth.

The earlier article mentions mostly about the American economy, therefore this article focuses on the performance of American companies which I believe are a leading indicator to economic performance.

The purpose of this article would then be to give an opposing view, and give investors a way to weigh two opposing thoughts and take action (or not) based on the information provided.

Say you have a company that generates positive cash flow. The cash then can be used for several purposes: by returning it to shareholders or reinvesting in their business. Capital expenditures are an interesting signal for companies in general as a fast-growing company typically wants to reinvest all earnings in R&D, buying new properties, renewing equipment, etc. Recently, companies in the S&P 500 index have been reporting slower growth in capex. 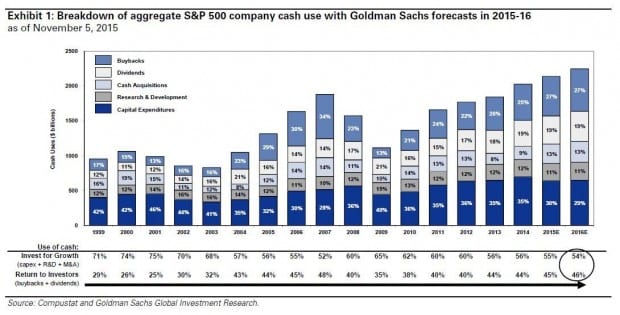 This could be partly explained by the falling capex of the energy industry due to low oil prices; the industry constitutes 33% of the S&P 500’s total capex.

One could argue that it’s just the oil sector and the rest won’t be affected and might help to prop up the S&P 500. But think about it this way, most bear markets have two phases as aptly described by Eric Parnell in his recent article: in 2001, technology went down first, all other sectors were fine, and then the entire market fell. In 2009, financials led the fall, followed by everything else.

Will the oil industry recover? Certainly, as with most industries that see severe beat downs. What goes down does recover eventually — but in a Darwinian way where many previous players will not survive and only the financially strong will. The question is simply when and how. Geopolitics play a key role in the oil industry with the Saudis and their hands on the faucet. The oil supply glut is higher than ever, with most of the oil tankers incidentally just off our shores (whip out your binoculars at ECP) just floating around with millions of barrels of oil waiting to be unloaded at a higher price.

A simple way to see how this might turn ugly:

Back to capital expenditures: so now you see the problem. The economy is a complex, intricate web of interconnected transactions. Decreased spending in one area would lead to decreased earnings in another, which then leads to more decreased transactions in seemingly unrelated fields.

Earnings have pretty much plateaued in late August 2014 and then declined across the board in the S&P 500 as seen from the table below: 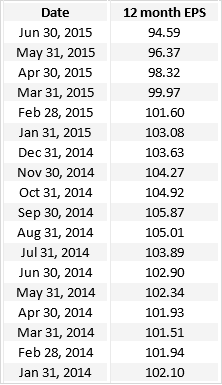 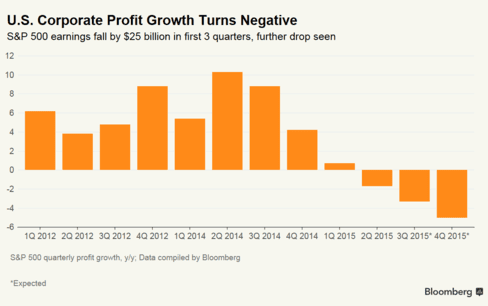 While the S&P roared back to life after the Yuan devaluation shock, average company earnings aren’t as lively.

Then again, this can be blamed on the strong dollar and the energy industry’s drag, but various industries see a net gain in low oil price environments as the costs of their inputs are driven lower, and a well-managed firm would be able to expand margins simply by thanking the Saudis for starting the price war. So perhaps those beneficiary industries could net off the losses by oil & gas companies? Apparently not.

Now this is an interesting take: shareholders love buybacks as it concentrates ownership and boosts earnings. What’s NOT good is when companies trading at rich valuations increase buybacks.

A share buyback is short-termism at its best. Yes, it shows that managers are “confident” in the company and its future, so they use the company’s money (not theirs) to buy back shares that will inevitably boost earnings per share and the stock price albeit temporarily, which is largely advantageous to managers with stock options (their money). The very reason why activist investing is so prevalent and hostile in the US is because of bad free cash flow management like this.

Buybacks are a great investment for the company if it trades at a discount to its intrinsic value and not at market tops. Increased and aggressive share buybacks can arguably be seen as a sign of a market top as companies desperately try to inflate valuations.

The table below showcases S&P 500 company earnings and buybacks over the years from 2008. As earnings decrease, companies are spending more buying back shares. So, looking at S&P 500 as a single entity, one could assume that instead of spending precious profits on reinvestments, this “firm” would rather inflate EPS numbers via share buybacks, no matter the valuations. 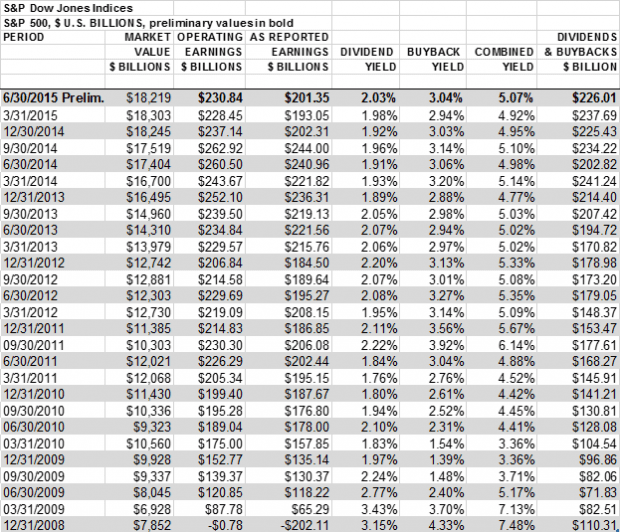 Aggressively buying back shares during times of crisis or market sell downs are reasonable and shrewd, but obviously market participants would rather let fear and greed stifle rational decisions.

Many argue that another sign of a market top is when companies gobble each other up at a frenzied pace. The M&A binge of late has been brought on by low interest rates wherein low cost debt is utilized to fund massive purchases. Another antecedent is inflated stock prices: all-share M&A transactions can be a signal of a market top as companies might think that their stock prices are inflated, therefore they’ll use their inflated shares to swallow a smaller company before the market reverses.

Although the “Big M&A Transactions = Market Top” theory isn’t really proven, one could use it as just another signal to complement other theses on deciding if the market is fully or overvalued.

Inversions are a new type of M&A in the U.S. and for good reason: their ridiculous double-tax system. American companies making products overseas and selling them overseas would have their profits taxed at 35% in the U.S. on top of the tax they have to pay overseas. It’s no wonder so many American companies are stashing trillions of dollars in cash offshore and not bringing them back to the States. 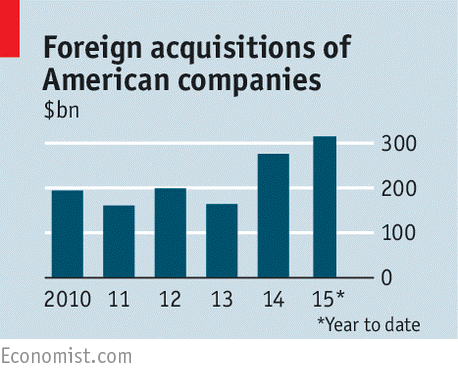 Some American companies go a step further – getting out of the U.S. altogether. The recent Pfizer-Allergan (Pfallergan) US$160 billion deal would probably be the poster child of the failure of the American tax code, and bring out ugly mudslinging matches between the democrats and republicans. Even Warren Buffett was involved in an inversion. Many would denounce Pfizer and other inverting companies as “un-American”, but they fail to realize that it’s simply wealth-destructive to bring the profits home.

Not only will a high double-tax system not increase tax revenues for the States, it will also decrease tax revenues dramatically when more and more companies leave the States. When major corporations go, so will expenditures, staff, and major investments. This is a highly contentious issue with a practical solution but Congress would rather fight than save their economy and their voters’ jobs.

Meanwhile, the Irish are only too happy to be the 51st state of the United States at the receiving end of tax dollars from inverting American giants. Perhaps Singapore can “one-down” them and offer a 14% tax rate to entice them to set up shop here; Pfizer could bring in more in tax revenues to Singapore than maybe ERP? Someone in IRAS please do the calculations. 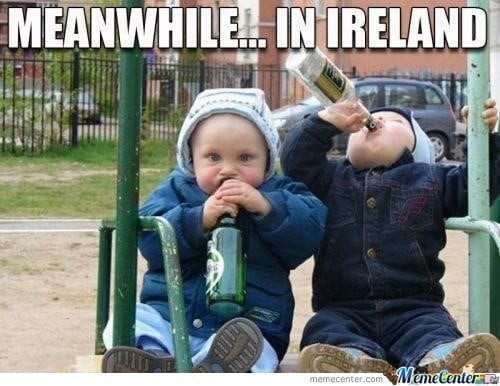 The S&P 500 will reflect this phenomenon by doing what a market does best: punishing people. It took a massive beating in the market to signal Congress to approve TARP. Maybe a day will come soon for Congress to remove this tax nonsense.

So, here are four reasons why I think the S&P 500 won’t perform so well in the short to medium term. If you’re in it for the long term and use dollar-cost averaging to invest in the index, then this might not concern you too much. But I would buy in smaller amounts now and wait for the next dip to come.