The telecommunication landscape in Singapore is likely to get more challenging for the incumbent companies of Singtel, M1 and StarHub. Liberty Wireless entered the market recently on 5 May 2016 with its brand – Circles.Life. Among its perks, Circles.Life offers free unlimited data service for WhatsApp and free caller number display which other telcos charge $5 a month for.

If this is not sufficient to shake up the market, IDA announced on February 2016 that it would introduce a fourth full service telco in Singapore by April 2017. The intention of IDA is to introduce more competition to benefit consumers in Singapore. The frontrunners for the fourth telco are MyRepublic and OMGtel.

As consumers, we can appreciate how the entry of new competition results in lower prices and more value-added services for consumers. However, if we stand from the perspective of investors, this is normally achieved at the expense of eroded margins. So especially for investors of Singtel/M1/StarHub, the biggest question on their minds is whether the incumbents can handle the increased competition that’s going to arise when the fourth telco launches.

Putting aside the other two competitors, I would like to make the case for Singapore Telecommunications (SGX: Z74) and share 5 reasons to be bullish about Singtel even with the entry of a fourth telco in Singapore.

Singtel is the largest of the three local telcos with 4.1 million mobile subscribers. Singtel has proven its ability to not only maintain but grow its profits in the event of a price war. The entry of MyRepublic in 2014 sparked off a price war in broadband subscriptions which has endured to this date.

For some investors, the key reason for holding a stock is its dividend track record. In that case, Singtel has a great one. 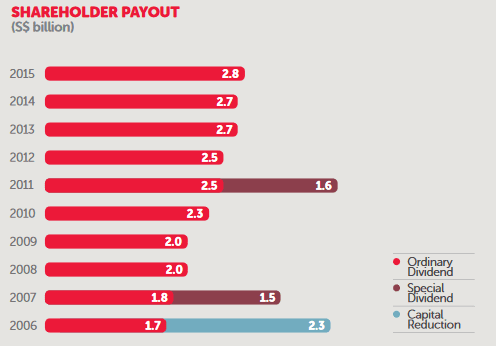 Singtel has a track record of either maintaining or growing its dividend in the past ten years even during lean years of 2008 and 2009 when the global financial crisis hit.

As an extra incentive, Singtel has revealed that it has the regulatory obligation to divest its current 100% stake in Netlink Trust to 25% by April 2018. Netlink Trust is the operator that rolls out the 4G network in Singapore and Singtel is expected to reduce its holdings via an IPO which could be the largest in Singapore in more than six years.

3. Strong presence in Australia, Indonesia, and the Philippines

If investors are worried about the eroding margins with the entry of a full service telco in Singapore next year, they can be consoled that Singapore only accounts for 26% of Singtel’s revenue. Singtel has considerable assets overseas which taps into the growing demand for data usage.

Singtel owns Optus which is the second largest telco in Australia. In its latest financial year ended 31 March 2016, operating revenue was up 4% to A$9.12 billion, EBITDA grew 6% to A$2.77 billion, while annual net profit grew 7% to A$901 million. Optus has the largest fleet of satellites in Australia and New Zealand and it is continually expanding its fleet to provide better quality calls. 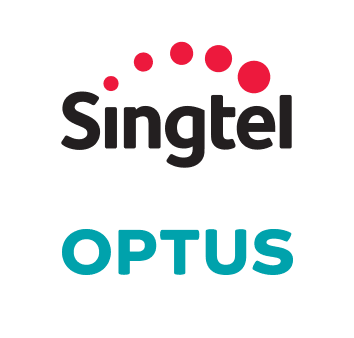 Singtel is a cash cow with $3.5 billion of free cash flow. Besides using it to pay dividends, Singtel has used it to acquire businesses that will generate sustainable income in the future. For investors, we should take note of two sizable divisions within Singtel:

If you are a ComfortDelgro investor, you might be shaking your head at the inability of the board to identify the threat of Uber and Grab. While Uber was founded in the United States, Grab started closer to home in Malaysia. So why didn’t ConfortDelgro invest a stake in Grab when it was at the infancy stages? The question is moot now but the result is that the transport industry has been disrupted by these start-ups who were able to bring services in a better and cheaper manner.

Knowing the disruptive power of start-ups, Singtel has invested US$250 million into its corporate venture fund, Innov8. The sole purpose of this fund is to unearth and invest in promising start-ups. The fund is headquartered in Singapore and it has a presence in Silicon Valley, Tel Aviv and Beijing.

One success story is its 2012 investment in Jasper. Jasper provides an Internet of Things (IoT) services platform for businesses to control multiple devices efficiently. Their clients include Ford, GM, and ABB. Cisco recently acquired Jasper for $1.4 billion in March 2016. Putting aside the question of how much Singtel earned from its 2012 investment, Singtel, and its associates Optus and Telkomsel, also introduced Jasper’s IoT services to businesses in Singapore, Australia, and Indonesia respectively.

Unlike SingPost which had to endure the decline in physical mail as the world switched to email, Singtel has been able to evolve with the times. Singtel has a strong management team that is constantly on the lookout for new revenue streams to replace eroding ones ahead of time.

When mobile replaced land lines, Singtel was well positioned to enter the new mobile market. As demand for mobile data grew, Singtel not only tapped into the growth of mobile data but has also expanded into cyber security and digital services. This is how Singtel maintained its pole position in Singapore over the past decades and why it will continue to be a relevant in years to come still. For investors, Singtel is probably the one telco that’s best positioned to handle the increased competition when the fourth telco launches.