I covered the advantages of the S&P 500 ETF and how you can own the top 500 U.S. companies with just one ETF in my previous article. The growth of the S&P 500 is closely related to the growth of the overall American economy, so now let’s do some fundamental analysis and the recent performance of the broad U.S. economy in GDP terms before we consider its longer term context.

The BEA was more and more optimistic of U.S. growth as seen from its increasing estimates – from 2.3% to 3.9%. So the U.S. economy looks pretty solid according to its latest growth data but the challenge is to get ahead of the curve. What is the economic growth likely going to be for the U.S. moving forward?

To do this, I personally look at a few main economic indicators and I’ll highlight five reasons why I’m bullish on the U.S economy and the S&P 500 in the long term.

Before we move on, I’d like to state that economic indicators (like everything else) can’t ultimately predict which way stock prices will go, but they can give a good indication of where the economy is now and where it is likely to go moving forward.

Just like how the historical financial performance of a company can’t predict future stock prices, it can still give you an indication of how well the company has been performing and is likely to continue to perform.

U.S. consumers hold the key with their consumer spending and the performance of the S&P 500.

The September 2015 reading shows that it has hit a new peak at 103.0 and this is better than analysts’ expectations of 96.2. A reading above 100 indicates that U.S. consumers expect a bullish economy going forward. In addition, you can see that consumer confidence is on a rising trend. The Census Bureau reported that U.S. retail sales grew by 0.7% in July but the momentum slowed to 0.2% growth in August; below market expectations of 0.3% growth. 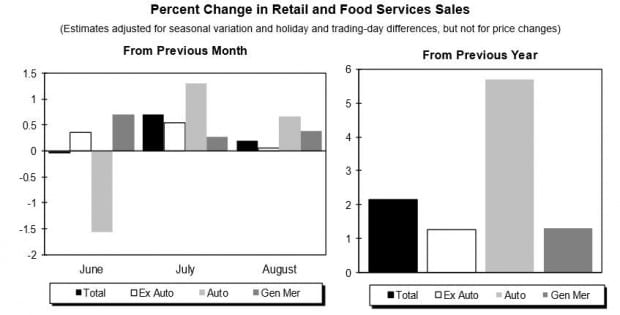 However, even though percentage growth in August slowed down, total spending is still rising overall. Judging from the strong consumer confidence, all things being equal, I expect continued growth momentum in spending to continue. This is because when consumers are confident about their future, they would naturally spend more. The August data is a mild disappointment (nobody said that the world is a bed of roses) but this sort of misses are normal. More crucially, this miss does not detract us from the strong overall consumption growth expected of the U.S. economy.

The labour market condition has been a consistent bright spot of the U.S. economy. Unemployment has been on a decline since its peak of 10.1% in October 2009 and currently it stands at an all-time low of 5.1%.

The U.S. labour market has been doing so well that the Fed has reduced its target unemployment rate from 5.0-5.3% to the range of 5.0-5.1% for year 2015. However it would seem that the U.S. labour market has weakened slightly where September is concerned. Non-farm employment grew by 142,000 instead of the expected 201,000. Wage growth stayed flat at 0.0% compared to 0.2% growth expectations for September. It is only natural that after employment numbers and wages have gone up consistently for some time that it would moderate after a while. Still I would like to point out that the overall U.S. labour market, which is powering the U.S. economy, is seeing its lowest unemployment rate in years.

The U.S. Purchasing Managers’ Index (PMI) measures the expansion of both manufacturing and non-manufacturing sectors in the country. A reading below 50 indicates a contraction and a reading above 50 indicates an expansion. The Institute of Supply Management publishes the PMI every month and this is the summary of their results for September: 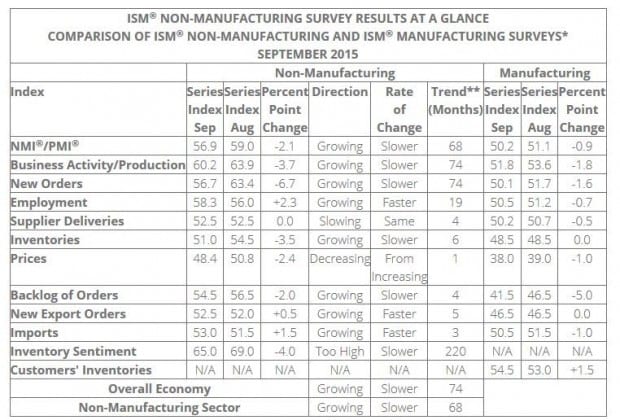 It is clear from their results that the overall economy is still growing albeit at a slower pace.

As you can see from the chart above, the PMI has been consistently above 50 since 2011 – four years of expansion.

I had been anticipating a Fed interest rate hike this year previously. However this is before the heightened volatility in China’s equity market which has made the Fed more cautious recently. This has prevented the Fed from making its move so far. This can be seen in the September 2015 FOMC minutes which was released recently on 08 October 2015.

This quote is referring to China’s stock market troubles:

“Over the intermeeting period, the concerns about global economic growth and turbulence in financial markets led to greater uncertainty among market participants about the likely timing of the start of the normalization of the stance of U.S. monetary policy.”

Basically the Fed is trying to say that they don’t dare to raise interest rates because this might cause China’s equity market to drop drastically again and pull the world into another recession. China is now the world’s second largest economy and if China falls in deep trouble, the whole world is affected.

“Growth in real GDP over the first half of the year was stronger than participants expected when they prepared their June forecasts, and the unemployment rate declined somewhat more than anticipated. Participants made only small adjustments to their projections for economic activity over the medium term. They continued to anticipate that, with appropriate policy accommodation, the pace of expansion of real activity would remain somewhat above its longer-run rate over the next two years and lead to further improvement in labor market conditions.”

This is the Fed’s bullish assessment of the U.S. economy going forward. If not for China’s troubles, the Fed would probably already have risen interest rates.

The overall U.S. economy has been growing strongly over the past five years. 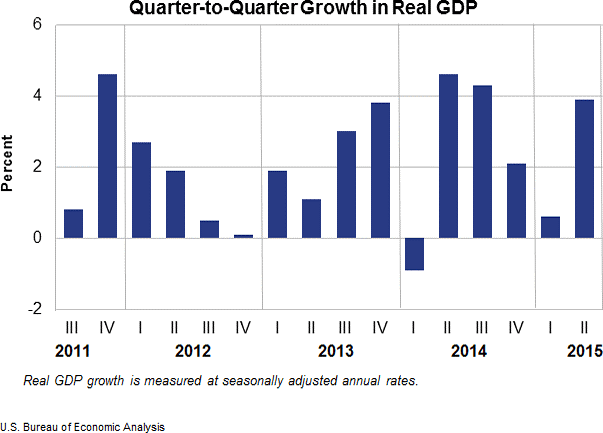 The U.S. has been on a multi-year recovery after the global financial crisis. The robust growth in 2010-2013 was criticized as a result of Fed easing. After the Fed ended its Troubled Asset Relief Program in October 2013, GDP still continued to grow (except for the harsh winter in the first quarter of 2014). The U.S. economy continued to grow by 2.4% for the entire year of 2014 and continues to grow so far in 2015.

Warren Buffett once said that we should be greedy when others are fearful and fearful when others are greedy. This contrarian approach was most evident when global markets were still reeling from volatility in the Chinese stock market.

It is clear from the chart above that the August plunge was due to China’s Black Monday. The SPY made a double-bottom reversal and recovered to pre-crash levels in a month – a 14.8% gain. Right now, I feel that prices are still reasonable at around 18-19 times earnings which is near the historical norm. You can refer to this article for more details why a P/E of 18.5 for the S&P 500 is reasonable for a buy-and-hold investment strategy.

All in all, I think the conditions are good for the U.S. economy to continue leading a global economic recovery for the mid to long term and the P/E of the S&P 500 is reasonable right now. But if you’re looking for value, you might have to wait for a better price.

There is never a “perfect time” to invest and we should always weigh the risk and rewards of each individual investment but if you’re looking to ride on the U.S economy for the mid to long term, the S&P 500 is great way to do so.