Flipping through the Astrea IV prospectus, we note that there are five key structural safeguards:

In order to have a better understanding as to how these safeguards can secure investors’ interests, let us take a deeper look at each safeguard and what they mean.

The reserves accounts are specially earmarked accounts which are meant to accumulate cash specifically for the purposes of redeeming the Class A-1 and Class A-2 bonds on 14 June 2023.

Where does the cash for the reserves account come from?

When the underlying assets of Astrea IV provides returns, usually in the form of cash distribution from the private equity (PE) funds, Astrea IV would have to redistribute these returns according to the Priority of Payment as stipulated in the prospectus.

For example, if you were to sell your house which is still under mortgage, the bank would first collect the money owed to it and any interest still owed before you receive the remaining amount from the sale.

In this case, the interest payment for the bonds and the cash deposited in the reserves account rank near the top when any cash distributions from the private equity funds are made to Astrea IV. 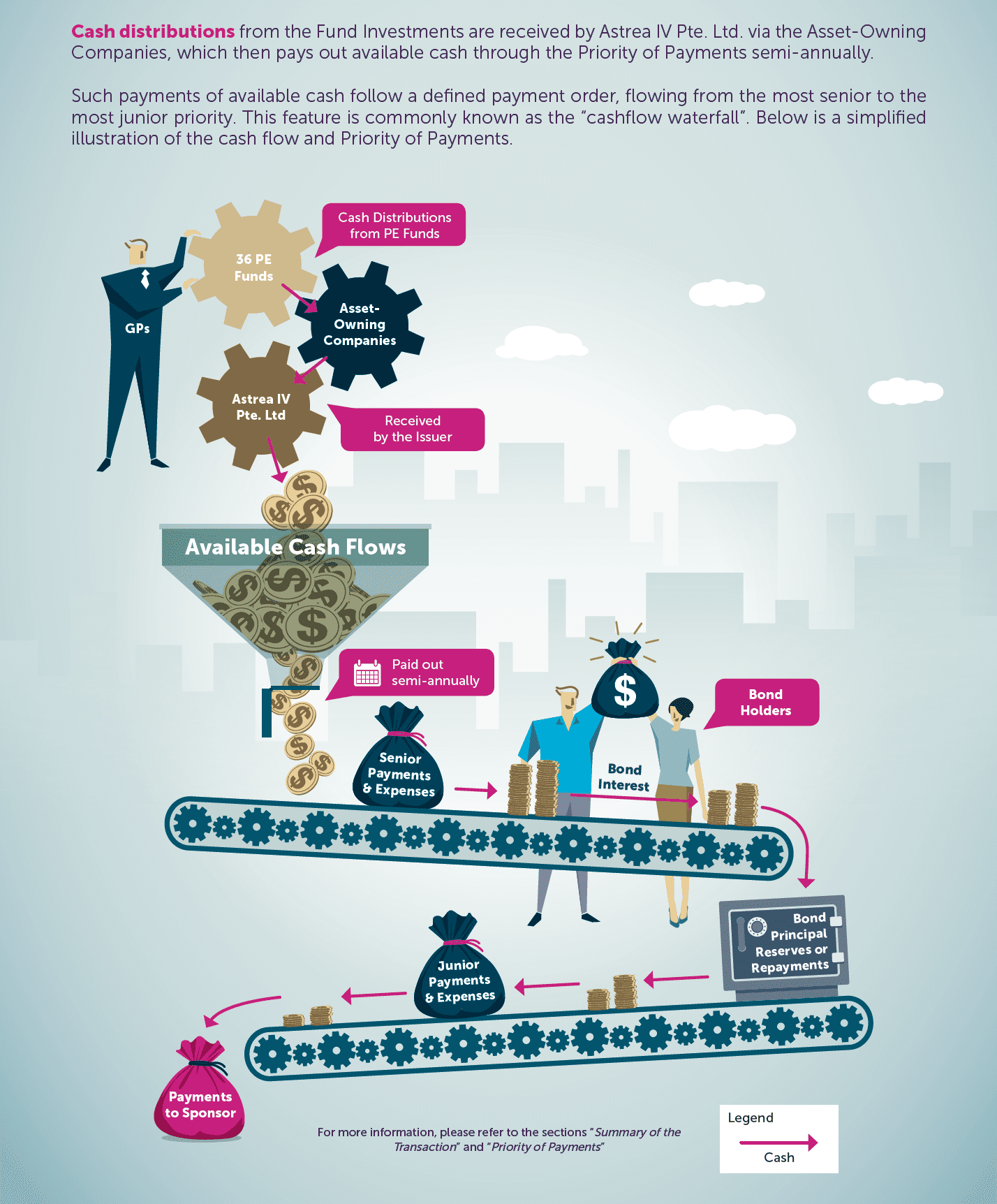 The sponsor sharing feature is a new feature which was not available for the Astrea III bonds issued earlier. The feature accelerates the amount deposited into the reserves account if a performance threshold is met.

Explanation: This means that after certain KPIs are met, the sponsor will divert more cash from fund distributions to the reserves account to ensure a much higher likelihood that the bondholders are paid off at redemption.

Explanation: This feature ensures that the bonds issue do not become over-leveraged. In the event that it does (e.g. from a write-down of private equity funds from poor performance), certain transactions will occur such as the redemption of the Class B bonds.

The ensuing cash flow will be paid to the reserves account to ensure that retail bondholders are paid back.

Astrea IV has a liquidity facility in place with DBS. The liquidity facility allows Astrea IV to call on funds to pay off certain expenses (including coupon payments) in the event of a cash shortfall. This ensures that investors will be able to obtain their coupon payments even if the illiquid nature of the underlying private equity portfolio does not yield free cash flows.

Explanation: A liquidity facility is simply a line of credit that Astrea IV can tap on to pay investors in case there is a time lag in distribution of cash from the private equity funds.

Exits from private equity investments are inherently unpredictable as they depend on exiting via IPOs or selling to an external buyer. It is the same issue as selling a property – it really depends on market conditions. The lumpiness of these cash flows is mitigated as Astrea IV can simply borrow the money from DBS in the short run to pay the interest due on its bonds.

Explanation: Astrea IV still has capital commitments that are unfulfilled. The way that a private equity fund works is that cash is only “called for” when an investment opportunity surfaces.

In layman terms, think of it as joining a group of buyers to buy property. The money from each buyer is only required to be paid when a property is found. Until then, you do not have to put up the cash.

The same analogy applies in this case, and Astrea IV still has certain ‘capital commitments’ in the event a good opportunity surfaces and one of their private equity funds wants to deploy the cash. The capital call facility allows Astrea IV to borrow money from the bank to meet this commitment.

In general, the structural safeguards from Astrea IV’s bond issuance provides investors with a fair amount of protection. The reserves account structure coupled with the sponsor sharing and maximum loan-to-value features allow for timely and prompt built up of reserves to ensure that there will be funds to redeem the Class A-1 and Class A-2 bonds.

The liquidity facility and capital call facility ensures that Astrea IV will not face any issues with cash flow given the illiquid nature of the underlying private equity portfolio. These structural safeguards should provide comfort to the retail investors to invest in the bonds and not have to worry about the illiquid nature of the underlying portfolio.

It’s clear that a lot of thought was put into the structuring of the bonds, especially with regards to the structural safeguards. There a distinct lack of quality bond issues in the market. We welcome the addition of the Astrea IV bonds the investor’s portfolio. Our own opinion is that any risk of real default is small, and in light of this, the yield offered to investors far compensates them for any risk taken.

Terence Fong practiced as a lawyer with a top-tier international law firm specializing in finance and capital market deals. He has practice experience in various jurisdictions in Europe and Asia advising on cross border transactions. He currently works with hedge funds to advise them on their capital and investment structure. He also works with venture capitalist funds to help start-ups grow and scale regionally and internationally.

Disclaimer: The authors will be subscribing in the bond issue. The above article does not constitute investment advice and simply represents the opinion of the authors.