Overseas Education Limited (SGX: RQ1) (OEL) operates Overseas Family School – an international school which offers the K-12 International Baccalaureate for children of expatriate parents living in school. The school has over 3,800 students of over 70 nationalities and has been around for more than 20 years. You might have noticed the school when it was located along Paterson Road (especially if you frequented the public carpark behind Ngee Ann City), but the school has since moved to new premises in Pasir Ris – a far cry from the bustle of Orchard Road.

OEL’s share price has been on a downtrend since 2014. It hit a peak of $1.02 in June 2014 but the stock is now trading at just 44 cents (as at 25 July 2016). With a falling share price and uneven profits, will Overseas Education be able to justify its investment in a larger campus in Pasir Ris and turn its business around despite being located in the east of Singapore?

Here are five things you need to know about Overseas Education Limited:

David Alan Perry (the chairman & CEO) and Ms. Irene Wong (executive director) purchased shares in January and May 2016 which increased their shareholding percentage to 33.03% and 31.75% respectively.

Based on the table above, Perry and Wong both purchased an equal number of shares for $781,000. The average purchase price is $0.42. The insider buying might signal the management’s confidence in the company despite declining results in the near term.

2. Regular dividend is being reduced

OEL has maintained a consistent dividend per share of 2.75 cents for the past three years despite declining profits. However, investors should note that the 2015 dividend comprised both a normal and special dividend. Special dividends should be treated as an exceptional payout as the management can easily choose not to pay it moving forward. If results continue to fall, OEL may decide to pay the normal dividend and cut the special dividend. 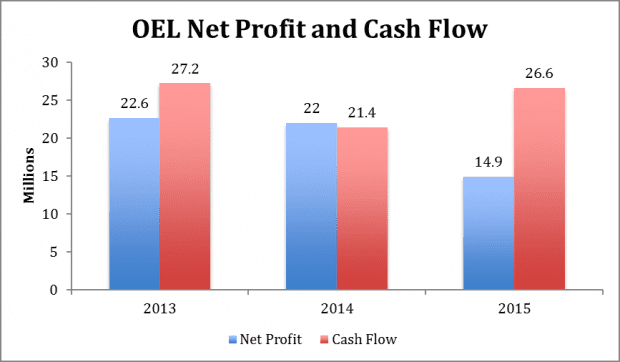 Despite net profit falling from $22.6 million in 2013 to $14.9 million in 2015, OEL has generated above $20 million in cash flow per year over the last three years. Because of its cash flow, OEL was able to easily cover its dividend payout of $11.42 million in 2015 – which is 43% of cash flow. With its cash flow generation, OEL shouldn’t have a problem maintaining at least its normal dividend per share of 1.375 cents moving forward.

4. There is room for growth

OEL recently shifted to a new campus in Pasir Ris. Its previous campus at Paterson Road had a maximum student capacity of 3,779 and was running close to full capacity. Unfortunately, the move to Pasir Ris has affected OEL’s student enrolment in the short term as the campus is now located in the far east of Singapore compared to its previous centralized location in the city. The new campus can house a maximum of 4,800 students – a 27% increase.

Personally, I think the issue is temporary and it will only be a matter of time before OEL fills up its student population to its normal enrollment rates. When that happens, we can expect the company’s profit and cash flow to improve.

5. Watch out for debt levels

The school’s Paterson campus was leased whereas OEL raised money through bonds to own and build its new campus in Pasir Ris. This increased the company’s debt level tremendously; OEL’s current debt/equity ratio is 0.98 – the company owes nearly a dollar for every dollar in equity. Total debt is $151.6 million which is 5.7 times its cash flow – a manageable level. However, investors should take note if debt levels increase and/or cash flow falls. It will be a good sign if total debt starts to reduce over the next few years as OEL pays down its borrowings and enrolment numbers increase.

Singapore has a sizable expatriate population and OEL’s Overseas Family School is the one the largest and most established international schools in the country. Unless the government drastically reverses its policy on foreign talent, then our expat community is here to stay and with it the demand for international education for their children.  As long as OEL is able to attract students to its new campus in Pasir Ris (which might take some time for families to adjust) and manage its debt prudently, the company has an opportunity to turn its results around in the mid to long term.

Overseas Education Limited is just one company in Singapore’s education segment in the country’s overall retail sector. If you’d like to know about the retail trends affecting Singapore, Malaysia, Thailand and Indonesia and the overall outlook for the sector in these countries, you can download this free report by the SGX – Overview of The Retail Sector in ASEAN: A Focus on Companies Listed on SGX.

The report also focuses in particular on six segments in the Singapore retail market – fashion and apparel, jewellery and watches, pawnbroking, automotive, education, and lifestyle and homeware – with a discussion on the overall outlook, current drivers and restraints, and overview of relevant retailers within each segment listed on the SGX.

This article was written in collaboration with SGX. To stay up to date with the latest news on Singapore stocks, you can like the SGX My Gateway Facebook Page.