If so, why do we pay our insurance bills year after year without fail? The answer is: Peace of mind.

It is to have some sense of security and compensation if we face certain losses arising from an unfortunate event or events. The sum recovered is not a personal gain. Rather, it allows us to move forward with life without suffering a major financial setback.

In this article, I’ll write about LPI Capital Berhad (KLSE: 8621). Presently, it is one of the leading general insurance companies in Malaysia. I’ve dissected its accounts and read its annual reports to bring you a detailed look at the success and achievements of the insurer.

Here are the 7 things you need to know about LPI Capital:

1. LPI Capital Bhd has achieved CAGR of 12.23% in operating revenues over the last 10 years. It has increased from RM434.76 million in 2006 to RM1.38 billion in 2016. This is due to continuous growth in gross written premium (GWP) of its fire and motor insurance products during the period. 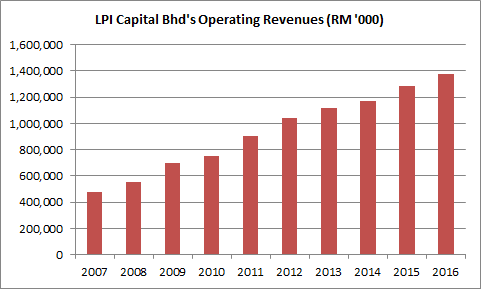 2. There are three main reasons that have driven sales growth for LPI Capital Bhd.

3. LPI Capital Bhd has achieved CAGR of 13.77% in investment-related income over the last 10 years. It has increased from RM24.47 million in 2006 to RM88.87 million in 2016.  This is important as it is common for insurers to derive substantial profits from their investment assets. 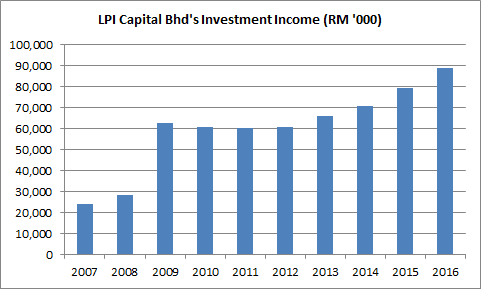 There are three things we need to know about its investment income. 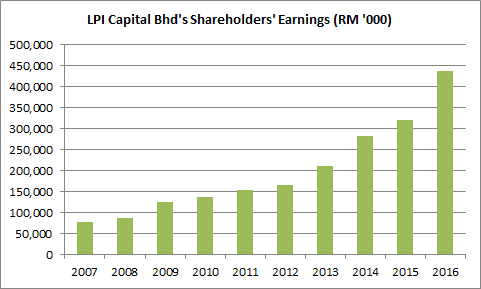 5. LPI Capital Bhd has achieved a nine-year return on equity (ROE) average of 15.24% per annum. This means, LPI Capital Bhd has made, on average, RM15.24 in annual earnings from every RM100 in shareholders’ equity over the last nine years. ROE for 2007 was excluded from the calculation of LPI Capital Bhd’s average ROE.

But why nine years and not 10? This is because LPI Capital Bhd adopted FRS 139 which changed the classification & measurement of financial assets. This has resulted in substantial growth in shareholders’ equity in 2009. The 2008 shareholders’ equity was restated. Thus, 2008 is the first year of ROE calculated to reflect the adoption of FRS 139. 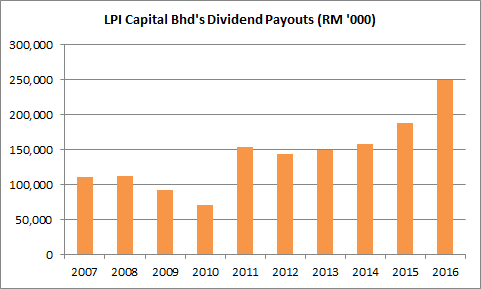 7. LPI Capital Bhd anticipates an increase level of competition in the insurance industry. This is due to the commencement of the phased liberalisation of motor and fire insurance coverage starting on 1 July 2016.Under this liberalisation, prices of these classes of insurance will now be determined by each individual insurer instead of being regulated by a tariff structure.

The commencement of the next phase of the liberalisation plan is scheduled to begin on 1 July 2017. The board of LPI Capital Bhd expects some compression in margins. Thus, to offset this impact,  LPI Capital Bhd is developing new specialty products and would be leveraging on its Business Process Management (BPM) system to optimise efficiency.

Despite challenges anticipated in 2017, LPI Capital Bhd has expressed its confidence as it has a healthy financial position and commendable Capital Adequacy Ratio (CAR) which is above the 130% minimum set by Bank Negara Malaysia. Moving forward, LPI Capital Bhd is committed to maintain its position as one of the most established and well-managed insurers in Malaysia and to deliver long-term economic value to its shareholders.

Read more: The one ratio to use when valuing an insurance stock