CapitaLand Commercial Trust (CCT) is Singapore’s first and largest commercial REIT. It owns 10 centrally-located office and commercial properties in Singapore including Capital Tower, Raffles City, and CapitaGreen. As at 31 December 2017, CCT’s portfolio of properties is worth $10.4 billion.

I attended CCT’s 2017 annual meeting where former CEO Lynette Leong shed a tear expressing her gratitude to the staff of CCT. In November 2017, Leong left her role and was appointed as CEO of CapitaLand Commercial Limited (CCL), a wholly-owned business unit of CapitaLand, while head of asset management, Kevin Chee, succeeded her as CEO.

Though the new CEO had only been in charge a few months before the AGM, I attended the meeting to find out more the new leadership in place and the REIT’s past year performance. Here are eight things I learned from the 2018 CapitaLand Commercial Trust AGM:

1. Gross revenue grew 13.0% to $337.5 million and net property income grew 14.8% to $265.5 million. Growth was mainly due to a full-year’s contribution from CapitaGreen and new contribution from the acquisition of Asia Square Tower 2.

2. Distributable income grew 7.4% to $288.9 million but distribution per unit (DPU) fell 4.6% to 8.66 cents. The drop in DPU was due to the rights issue used to partially fund the acquisition of Asia Square Tower 2. Along with bank borrowings, CCT also divested Wilkie Edge for $280 million and a 50% interest in One George Street for $1.18 billion to fund the rest of the acquisition. Based on CCT’s 2017 DPU and its closing price as at 11 May 2018, its distribution yield is 4.9%.

3. Portfolio occupancy rate is at 97.3%, which is higher than the core central business district (CBD) occupancy rate of 93.8%. Weighted average lease expiry is 5.9 years and half of leases expiring in 2018 have already been renewed. CEO Kevin Chee warned that rental reversions in 2018-2020 may be negative because the new leases signed would be cheaper than the expired ones committed 2-3 years before as office rents have been on a downward trend since 2015. On a positive note, Singapore’s office rental market seems to have bottomed out after eight consecutive quarters of decline and Grade A office rents were up 3.3% in 4Q 2017. 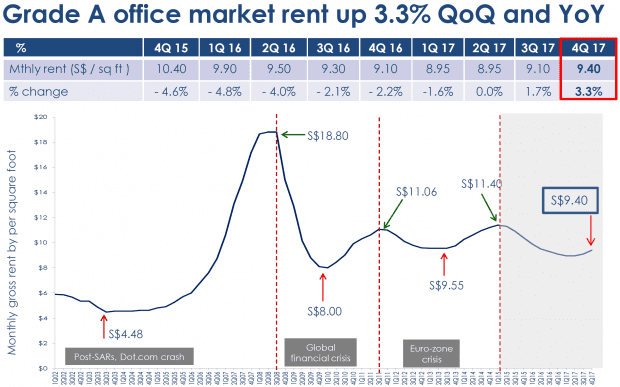 4. CCT is building a 51-storey integrated development comprising Grade A offices and serviced residences at the site of the old Golden Shoe Carpark. At 280 metres tall, the new building called ‘CapitaSpring’ will be the joint tallest skyscraper in Singapore. CCT has a 45% interest in the $1.8-billion project along with its joint venture partners, CapitaLand (45%) and Mitsubishi Estate (10%). The CEO said that CCT has the rights to acquire the stakes from its partners after five years. CCT has already secured J.P. Morgan as its anchor office tenant for CapitaSpring. The investment bank will take up close to a quarter of the 635,000 square feet of the office net lettable area when it moves in after the building’s completion in 2021. The CEO added that CCT tries to cultivate long-term relationships with valued tenants and does its best to keep them in the property or within CCT’s portfolio when they want to expand. When CapitaSpring is ready, CCT can accommodate J.P. Morgan’s expansion needs by seamlessly moving them from its current premises at Capital Tower so there is as little downtime as possible for the tenant.

5. Gearing ratio as at 31 December 2017 is at 37.3%. Average term to maturity is 3.9 years and cost of debt is 2.6%. Eighty percent of borrowings are at fixed interest rates. CCT has also secured refinancing for the $1.1 billion of borrowings expiring in 2018 through a mixture of bank loans and medium terms notes.

6. With the divestment of Wilkie Edge and acquisition of Asia Square Tower 2, a unitholder asked if the management planned to shift CCT’s portfolio entirely toward Grade A offices in the core CBD area. The CEO replied that the management is currently happy with the portfolio, but it is important to have diversity of properties within the portfolio. Not every property has to be a Grade A office building and some non-prime properties still generate good returns with opportunities to improve yields further.

7. The unitholder noted that the government could prematurely terminate the land lease of Bugis Village from April 2019 onwards even though the original lease runs until 2088. The CEO confirmed that the government has the right to cancel the lease upon compensation of $6.6 million plus accrued interest. The management is still engaging with the authorities on the matter and their plans for the area, and hope to hear from them soon.

8. Another unitholder was concerned that CCT could possibly acquire outside of Singapore as he likes the fact that the REIT is a pure Singapore play that invests in one currency and mainly within one asset class (i.e. offices). The CEO explained that CCT has come a long way from a portfolio of $2 billion when it listed in 2004 to over $10 billion today by riding on Singapore’s steady growth. However, Singapore is now a cosmopolitan city and property values have risen to a point where it is harder to find opportunities. While Singapore remains the REIT’s mainstay, he feels that CCT may have to look elsewhere at this phase of its growth. He added that CCT’s sponsor, CapitaLand, has an established platform in many countries and CCT can look to leverage on that. In response, the unitholder proposed that CapitaLand spin off other commercial REITs that purely focus on a single country and currency, so that investors can choose the markets they wish to be exposed to.