If you are quick to say that it is bad, most likely, you are a consumer of fuel. Besides the pump, high cost of fuel does affect our daily living. It impacts prices of just about everything. This includes what we eat, what we buy, and even where we choose to live.

In Malaysia, locals are conscious of petrol prices. This is because we are a nation of drivers and car owners. Local travel is inconvenient as the public transportation system is relatively inefficient. Without a car, most of us are crippled in our own country. Regrettably, for most Malaysians, weekly visits to petrol stations are inevitable. Thus, rising petrol prices are bad if we look from the viewpoint of a consumer.

But what if we shift our focus to being a seller of petrol? Instead of complaining, I believe we might be happy about higher petrol prices as a seller of petrol. This prompted me to look at a company that earns billions of ringgit from millions of Malaysian drivers every single year. It’s none other than Petronas Dagangan Berhad (Bursa: 5681). Listed on 8 March 1994, Petronas Dagangan is the marketing arm of Petroliam Nasional Berhad (Petronas) and has grown into one of Malaysia’s largest public companies with domestic market leadership in multiple petroleum products.

In this article, I’ll highlight eight things you need to know about Petronas Dagangan before you invest.

1. Petronas Dagangan derives its income mainly from two business segments. The retail segment involves the operation of a network of Petronas service stations, and sales of liquified petroleum gas and lubricants to retail customers nationwide. The commercial segment distributes a wide range of petroleum products to industrial-based customers. In 2016, the retail segment accounted 56% of Petronas Dagangan’s total operating profits with the balance contributed by the commercial segment.

2. Petronas Dagangan expanded its network of Petronas service stations gradually — from 892 stations in 2008 to over 1,000 stations in 2016. It is currently the largest petrol station operator in Malaysia. In addition to petrol sales, the company has also actively increased its ancillary income through various value-added services including:

In 2014, the retail segment made RM291 million in operating profits — the lowest recorded since 2010. This was due to a sharp margin compression as a result of a drastic decline in petrol prices. Since then, the retail segment has improved its margins as a result of cost optimisation initiatives implemented in 2015 and the marginal increase in petrol prices in 2016. As a result, operating profits have increased to RM682 million in 2016 — the highest since 2010. 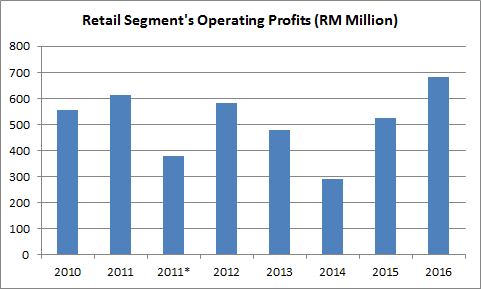 Source: Petronas Dagangan Berhad annual reports. *Period is from 1 March 2011 to 31 December 2011 due to a change in financial year.

3. Petronas Dagangan distributes a diverse portfolio of petroleum products to a wide range of commercial-based customers. Conventionally, this includes gasoline, jet fuel, kerosene, diesel, fuel oil, asphalt, and industrial liquified petroleum gas. In 2015, Petronas Dagangan added two new products: Sulphur which is widely used in chemical industries, and petroleum coke which is mainly used in the cement and brick industries. Overall, the commercial segment has achieved growth in operating profits from RM350 million in 2010 to RM535 million in 2016. 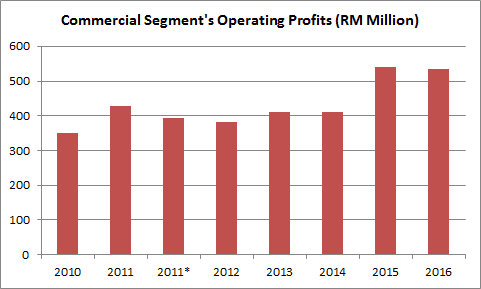 4. Petronas Dagangan recorded substantially lower group revenues in 2015 and 2016. From a peak of RM32.34 billion in 2014, group revenues dropped to RM21.79 billion in 2016 — the lowest since 2008. This is due to a decline in average selling prices of all petroleum products as a result of the substantial drop in crude oil prices since June 2014. 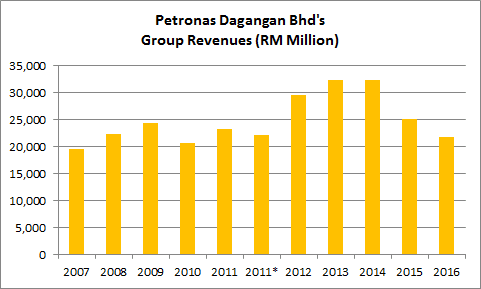 5. Despite lower sales, Petronas Dagangan achieved higher profits in 2015 and 2016. Shareholders’ earnings increased from RM501.6 million in 2014 to RM944.6 million in 2016. This is due to improved margins from both retail and commercial segments during the two-year period. It is a reflection of Petronas Dagangan’s ability to remain profitable in times when oil prices are low. 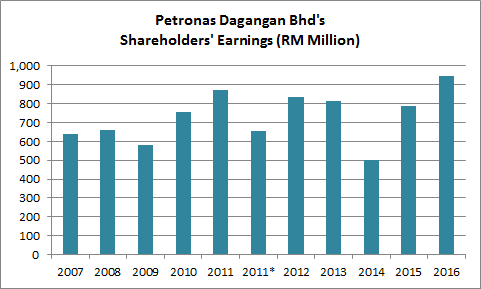 6. Petronas Dagangan has an average 10-year return on equity (ROE) of 16.24%. This means, it has made, on average, RM16.24 in annual profit from every RM100 in shareholders’ equity from 2008 to 2016. Evidently, Petronas Dagangan has built a proven track record of delivering sustainable profits despite the huge volatility in crude oil prices over the last 10 years. 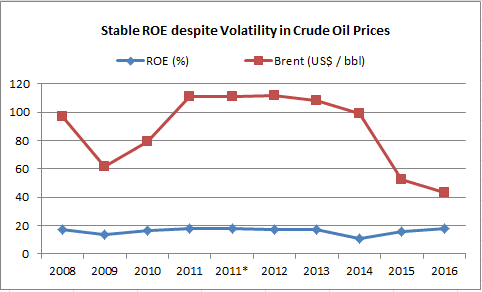 7. Petronas Dagangan Bhd has generated RM11.39 billion in cash flows from operations over the last 10 years. Out of which, the company has spent:

It has also increased its cash reserves from RM544.0 million to RM2.43 billion over the same period. Clearly, Petronas Dagangan is a cash-producing business and does not need to continually raise equity and debt to expand its operations or reward its shareholders with dividends.

In conclusion, Petronas Dagangan Bhd displayed resilience in its performance despite the huge volatility in crude oil prices. It is less meaningful to predict the direction of oil prices as cash continues to flow into the company every single day regardless of oil prices.

Moving forward, Petronas Dagangan has shared the following as its strategic focus for 2017:

As at 31 March 2017, Petronas Dagangan remains profitable and reported cash reserves of RM2.32 billion with a debt-to-equity ratio of just 4.8%. Thus, with a healthy balance sheet, the board remains confident in pursuing its strategic objectives and delivering strong and sustainable financial results in 2017 as the leader in the marketing and distribution of multiple petroleum products in Malaysia.

Related: 12 things you need to know about Petronas Gas before you invest