Today, Islamic banking remains as a key driver of growth in the local banking industry in Malaysia.

Over the past decade, both local and foreign banks have set up Islamic banks to provide a wide range of Shariah-based financial services to local Muslim customers which made up approximately 70% of the population of Malaysia. To name a few, they include OCBC Al-Amin, HSBC Amanah, and Standard Chartered Saadiq.

Perhaps, if you’re reading this, you may wonder how Islamic banking differs from conventional banking. For a start, Islamic banking refers to a system of banking that compiles with Shariah law. It adopts principles that cultivates entrepreneurship, trade, and commerce which, in general, add value to society. Thus, several financial activities such as usury, gambling, and speculative trading are strictly prohibited in Islamic banking.

In this article, I’ll write about BIMB Holdings Berhad (KLSE: 5258). It is a pioneer in the Islamic banking industry in Malaysia. Presently, BIMB Holdings derives its main income from Bank Islam Malaysia and Syarikat Takaful Malaysia. Here, I’ll bring a detailed account of the success and achievements of BIMB Holdings thus far and an outlook looking forward. Therefore, here are the eight things you need to know about BIMB Holdings Bhd.

1. BIMB Holdings Bhd has achieved a CAGR of 22.61% in Financing, Advancing and Other Assets over the last five years. It has increased from RM14.141 billion in 2011 to RM39.189 billion in 2016. BIMB Holdings’ growth in financing assets has surpassed the domestic loan growth rate in Malaysia of 8.79% during the same period. 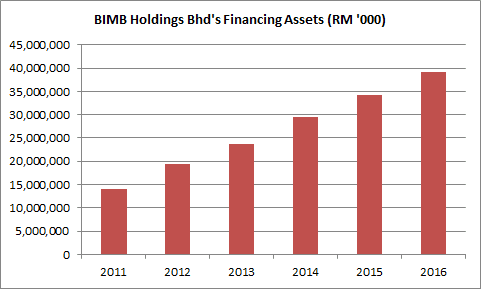 2. BIMB Holdings has achieved a CAGR of 11.16% in Operating Revenues over the last five years. It has grown from RM2.08 billion in 2011 to RM3.53 billion in 2016. There are two main drivers that have contributed to the sales growth for BIMB Holdings. Firstly, it’s growth in financing assets. Secondly, its growth from Takaful revenues during the five-year period. 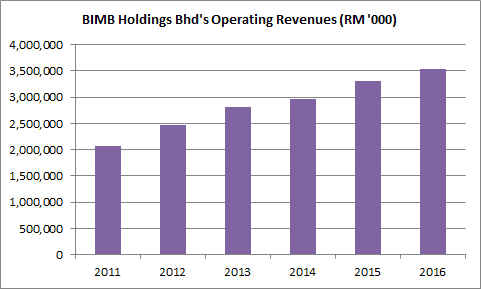 3. BIMB Holdings has reduced its Gross Impairment Financing Ratio (GFIR) from 1.55% in 2012 to 0.98% in 2016. Net Impairment Financing Ratio (NFIR) has reduced from 0.91% in 2013 to 0.75% in 2016. The management has been diligent in taking preemptive measures to enhance debt collection and avoid delinquencies among its borrowers. Thus, BIMB Holdings Bhd improved its quality of financing assets during the five-year period.

4. BIMB Holdings has been seeing a steady rise in earnings from Syarikat Takaful Malaysia. As at 31 December 2016, BIMB Holdings is the largest shareholder of Syarikat Takaful Malaysia with a 59.88% shareholding. It is the first and the only public-listed Takaful operator in Malaysia. It has achieved a CAGR of 18.08% in shareholders’ earnings over the last five years — up from RM76.79 million in 2011 to RM176.28 million in 2016. 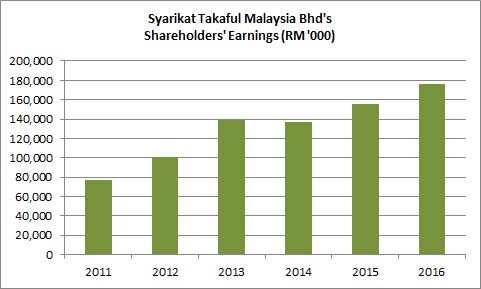 5. As a result, BIMB Holdings has achieved a CAGR of 8.10% in Profits before Zakat and Taxation (PBZT) over the last five years. PBZT has grown from RM588.92 million in 2011 to RM869.20 million in 2016. The growth in PBZT was contributed by steady growth in profits from both Bank Islam Malaysia and Syarikat Takaful Malaysia during the period. 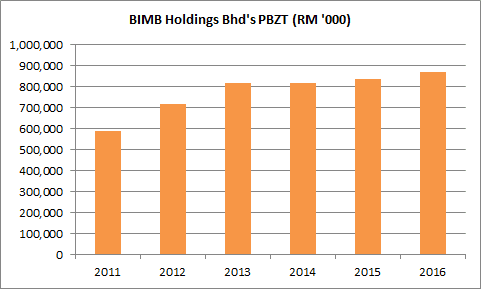 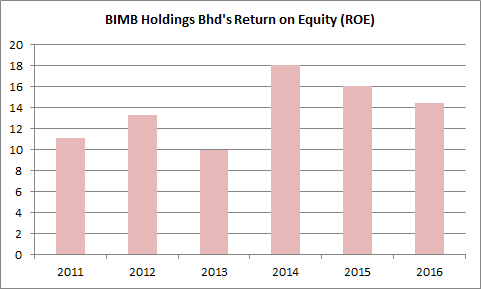 In 2017, the local banking industry in Malaysia is expected to be challenging. This is due to a number of factors. Firstly, growth in financing assets is expected to moderate. Secondly, competition for deposits among banks will intensify. These two factors alone would put some pressure on net financing margins (NFM) for Islamic banks or net interest margins (NIM) for conventional banks.

In response, BIMB Holdings has revealed that it would go on the defensive. This includes pursuing balanced growth, preserving asset quality, and sustaining margins. At present, BIMB Holdings has revealed that it has a healthy capital position with a Total Capital Ratio of 15.52% and Financing Loss Coverage Ratio of 175.4% which is helpful in weathering a more demanding operating environment in the Malaysian banking industry.