However, if I think about some of the more recent successes on Bursa Malaysia, the most obvious company has to be MyEG Services Berhad (Bursa: 0138). The company was only listed in 2007 and over the last 10 years has returned more than 42 times the invested capital for its investors. And that is not even including its dividends.

Here are eight things about MyEG Services and why it has been such an amazing investment.

MyEG Services started out with just one simple service: It was able to get a contract from the Road Transport Department of Malaysia to allow users to renew their road tax online or from its kiosks. Today, it is becoming more and more like an “online government department” for the Malaysian public. Currently, the company provides e-government services for seven government departments including:

These small transaction fees have grown to an extremely large amount over the past eight years. From 2008 to 2016, MyEG Services’ revenue grew at a compound annual growth rate (CAGR) of 24.4% to RM281.6 million. With its good track record in implementing digital channels for government departments, MyEG Services has been able to win more contracts from other government departments in the last few years. 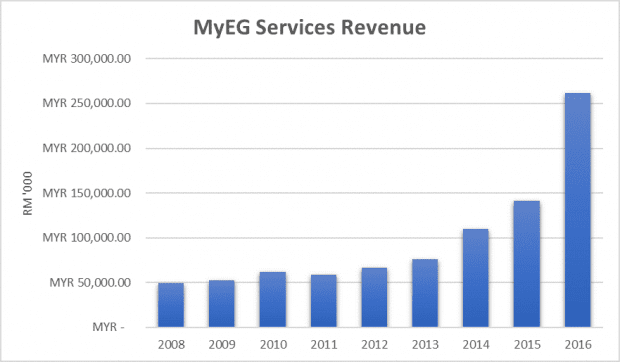 MyEG Services was able to grow its profits over the past eight years as well. Its net profit grew even faster at a CAGR of 32.8% over the same period. 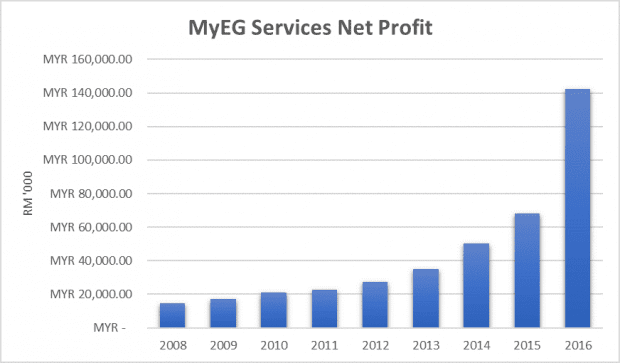 This means that as the company increased its revenue, it’s also improving its margins. 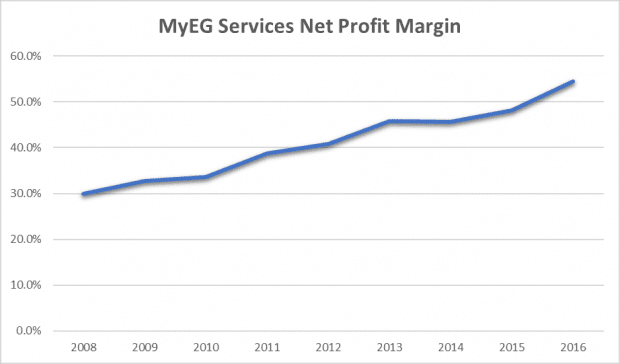 In fact, the company has seen its net profit margin edge up from about 30% in 2008 to 54.5% in 2016. This might be due to better economies of scale in its business model as the company expands. 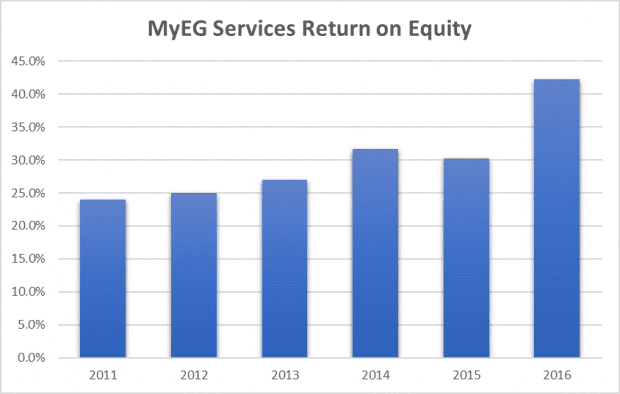 The trend in its return on equity is also showing some positive signs. Its ROE has been very impressive as it has increased from around 24% in 2011 to more than 42% in 2016. This again might be highlighting the company’s ability to generate a higher return as its gain higher economies of scale. This is because its existing software infrastructure is easily scalable as it serves more government departments through its existing platform.

The company has generated positive operating cash flow since 2008. And it has also been able to maintain a positive free cash flow for most of its history. With its strong cash flow business model, MyEG Services has maintained a net cash position since its IPO in 2007. At the end of 2016, the company had more than RM100 million in net cash sitting on its balance sheet.

So MyEG Services has fast growth, high margins, high ROE and low debt levels, it almost sounds like a fairy tale. However, no company is perfect and MyEG Services is no exception. Back in 2016, the company was caught by Bursa Malaysia for leaking material non-public information during an investor conference held by CIMB Bank. The company and its managing director were reprimanded. Although the breaches were not serious, it highlighted some lack of control within the company and might be a sign of weak corporate governance.

7. Reliance on the government

A more serious weakness in the business of MyEG Services is the fact that it is mainly serving government departments in Malaysia. Its business is extremely dependent on the government as its contracts have to be reviewed and renewed regularly. Any cancellation of its existing contracts could have a huge negative impact on its business. The management is aware of this risk and that is why in recent years it has been acquiring and starting more businesses that are less reliant on the government. For example, it recently acquired Cardbiz Holdings, a company which provides hardware and software solutions in Malaysia.

Given its great track record since its IPO in 2007, MyEG Services is hardly a hidden gem in the market right now. It is one of the highest valued stocks on Bursa Malaysia. MyEG Services’ share price is around RM2.08 (as at 14 September 2017) with a price to earnings ratio of about 39 times and only offers a 0.65% dividend yield. With a market capitalisation of more than RM7.6 billion now in the market, it is trading at around 27 times its 2016 revenue, which is definitely not a valuation that is easily stomached by investors.

MyEG Services has been a great investment for its long-term shareholders. It is one of the few successful technology-related companies in Malaysia. Its ability to help government departments digitise their operations has proven extremely valuable to its stakeholders: the government is able to outsource some of its services online, the public no longer have to wait for hours in line to get things done, and its shareholders have profited massively from the company’s growth.

However, MyEG Services is also blemished with lapses in its corporate governance. Together with its high valuation, it might not be a stock for everyone.