On 5 July 2016, Mapletree Commercial Trust (SGX: N2IU) (MCT) announced a proposed acquisition of an office and business park property, Mapletree Business City (MBC), for a purchase consideration of $1.78 billion. This will be MCT’s second acquisition since its IPO.

As a unitholder myself, I attended the extraordinary general meeting MCT held immediately after its FY2016 AGM to find out more details about the proposed acquisition and to vote on the proposed resolutions.

Here are 9 things I learned from Mapletree Commercial Trust’s 2016 EGM:

1. MCT is acquiring Phase 1 of MBC

MCT is acquiring Phase 1 of MBC which comprises an office tower and three business park blocks. Phase 1 was completed in April 2010 while Phase 2 of MBC is currently under development and is due for completion this year. The leasehold for MBC (Phase 1) is 80 years till 2096. 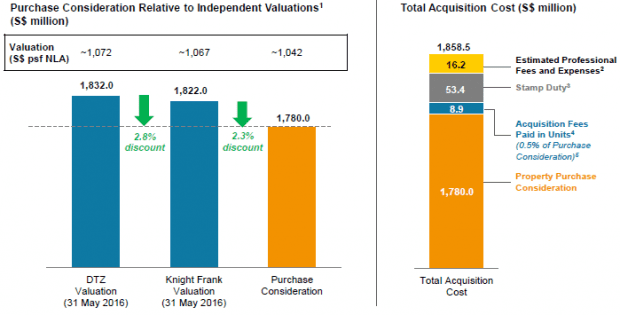 The purchase consideration is $1.78 billion which is a 2.3% and 2.8% discount to DTZ’s and Knight Frank’s independent valuation of MBC respectively. The total acquisition cost, however, is $1.86 billion after including acquisition fees paid to the manager ($8.9 million paid in units), stamp duty to the government ($53.4 million), and estimated professional fees and expenses ($16.2 million).

3. Acquisition is NAV and DPU accretive

The acquisition is expected to be accretive for net property income (NPI) yield, NAV, and distribution per unit (DPU). NPI yield will increase from 5.1% to 5.2%. NAV per share will increase to $1.31 and DPU will rise from 4.14 cents to 4.27 cents.

4. Exposure to the Alexandra/HabourFront office market

The management views MBC as a strategic addition to its portfolio. The property is of the largest integrated office and business park complexes in Singapore. It is located 10 minutes from the central business district (CBD) and directly connected to Labrador Park MRT station. 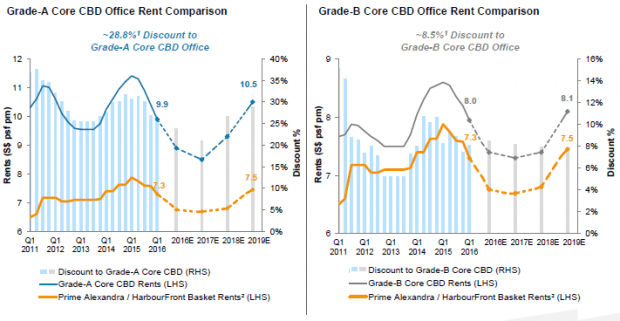 It attracts tenants who wish to be located near the CBD without having to pay sky-high rents. The Alexandra/HabourFront area offers rents which are 28.8% and 8.5% lower than Grade-A and Grade-B Core CBD offices respectively. Average office rent at MBC is $6.14 per square foot per month. 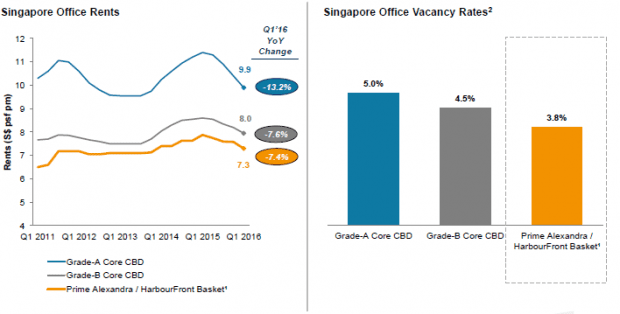 Mapletree Business City is the closest business park to the CBD and the growing demand for business parks is evident in MNCs like Google, American Express, HSBC, Nike, SAP, Samsung and Unilever relocating from the CBD to MBC.

7. Acquisition to be financed by a combination of debt and equity

MBC’s total acquisition cost of S$1.86 billion will be funded by loan facilities of up to $920 million and an issue of up to 795 million new units via a private placement to institutional investors and preferential offering to existing unitholders.

8. Some unitholders had questions and concerns

Chairman Tsang Yam Pui expressed surprise at the unitholder’s view as many investors have long asked when MBC would be acquired by MCT. Tsang explained that an asset of MBC’s quality is hard to find and would be very expensive in the open market. The fact that MCT is able to acquire the property at a price that allows for DPU and NAV accretion is a positive for unitholders. The property would also give good organic growth in the long run. The chairman also said that a good time to acquire a good asset is when you can get it at the right price. In the case of MBC, MCT is already acquiring it a discount to the valuation set by two independent valuers.

Another unitholder asked if the supply of nearby office properties like Alexandra Technopark and Fragrance Building (formerly NOL Building) would affect MBC. CEO Sharon Lim replied that in the next four years, only 4% of office leases at MBC are expiring in FY2018/19. Furthermore, the quality of an asset like MBC is a world of difference compared to the rest.

A unitholder jokingly asked if the sale of MBC was being ‘forced’ onto MCT by its sponsor Mapletree. The Chairman reassured the unitholder that the acquisition is a case of a willing buyer and a willing seller. But he noted that the deal is a related party transaction which is why the management has gone through the procedure of obtaining independent valuations and the transaction scrutinized by its independent directors.

9. The proposed acquisition was voted through

The proposed acquisition of MBC was approved at the EGM with 95.51% of votes in favor of the resolution. MCT has since announced they plan to raise $529.1 million from the private placement and $515.2 million from the preferential offering.

Liked our analysis of this AGM/EGM? Click here to view a complete list of AGMs we’ve attended »