Bursa Malaysia Berhad (Bursa: 1818) is the official bourse of Malaysia. Listed in 2005, it offers a wide range of exchange-related services. They include listing, trading, clearing, settlement, and depository services mainly for the local securities and the derivatives market.

As I write, Bursa Malaysia is worth around RM5.3 billion in market capitalization and is among the largest bourses in Southeast Asia. In this article, I’ll bring a detailed account of Bursa Malaysia’s success and achievements thus far and its outlook towards the near future. Here are nine things you need to know about Bursa Malaysia before you invest.

1. The securities market is the main income contributor to Bursa Malaysia. It accounted for 73.0% of Bursa Malaysia’s group revenues in 2016. This division operates the Malaysian stock market which houses 904 public-listed companies worth over RM1.6 trillion in total market capitalization. Revenue from the securities division declined substantially in 2008 due to lower trading activities as a result of the Global Financial Crisis. Since then, Bursa Malaysia has achieved a CAGR of 5.44% in revenue for the securities division over the last eight years, increasing from RM226.0 million in 2008 to RM345.3 million in 2016. 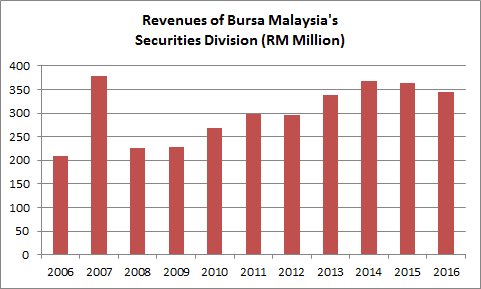 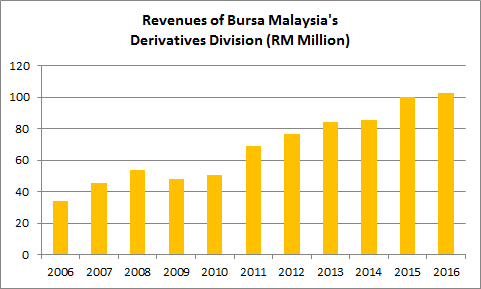 3. Overall, Bursa Malaysia has achieved a CAGR of 6.28% in group revenues over the past eight years, from RM290.3 million in 2008 to RM472.7 million in 2016. This was directly contributed by revenue growth from its securities and derivatives divisions during this period. 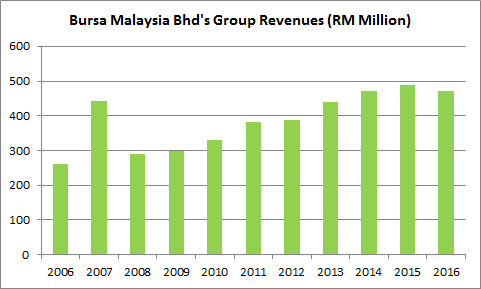 5. Since the crisis in 2008, Bursa Malaysia has achieved a CAGR of 8.02% in shareholders’ earnings over the last eight years, from RM104.4 million in 2008 to RM193.6 million in 2016. This was contributed by growth in revenues and a stable cost-to-income ratio during the period. Bursa Malaysia has a 10-year return on equity (ROE) average of 19.98%. (Here’s why we like companies with consistently high ROE.) 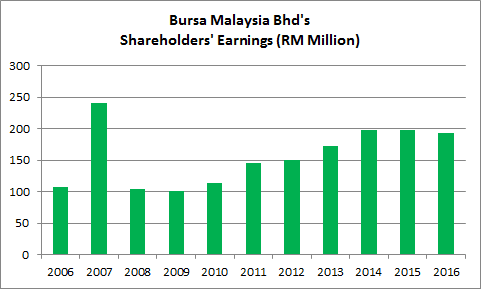 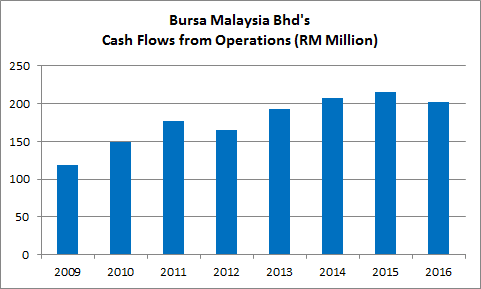 8. At present, Bursa Malaysia has revealed several potential risks involved and discussed initiatives to mitigate the impact on its business performance. They are:

9. Looking ahead, Bursa Malaysia intends to continue its efforts to become “ASEAN’s Multinational Marketplace”. To name a few initiatives:

In summary, Bursa Malaysia has built a track record of high ROE and consistent dividend payouts to shareholders. In the first half of 2017, Bursa Malaysia benefitted from higher trading activities in both the securities and the derivatives market. This in turn boosted Bursa Malaysia’s shareholders’ earnings to RM116.2 million in 1H 2017, up 16.9% from RM99.4 Million in 1H 2016. With its healthy balance sheet, Bursa Malaysia is also able to carry out its initiatives to enhance market participation among Malaysians and to capitalize on the continuous growth in ASEAN.