Palm oil has been a key contributor to the Malaysian economy for the many decades. Malaysia used to be the largest palm oil exporter in the world before being displaced by Indonesia in the past few years. In 2015, palm oil continues to contribute to the country’s economy strongly by providing about 4.2% to its gross domestic product.

The giant in the Malaysia palm oil industry is also one of the largest conglomerates in the country. Sime Darby Berhad (Bursa: 4197) is a RM65.0 billion company that has multiple business segments. It is also one of the largest palm oil companies in the world in terms of plantation size. The conglomerate has business interests in industrial products, motor vehicles, properties, healthcare, logistics, insurance, retail, and plantations.

Its plantation segment is diversified across four regions; Malaysia, Indonesia, Liberia, and Papua New Guinea & Solomon Islands. Overall, it owns about 1.0 million hectares of plantation land. Moreover, it is not just in the upstream plantation business, it has a sizeable downstream business producing oils and fats, oleochemicals, biodiesel and other products. In the palm oil sector, you have to know the 800-pound gorilla in the room. In Malaysia, that gorilla is Sime Darby.

In 2016, the company generated a revenue of RM43.96 billion and a net profit of RM2.4 billion. The company is currently trading at 21.0 times earnings, giving a 2.8% dividend yield. It has a market capitalization of RM62.7 billion.

Another conglomerate in the palm oil sector is IOI Corporation Berhad (Bursa: 1961). Unlike Sime Darby, IOI Corporation still derives a huge portion of its revenue from its palm oil-related business. It manages about 218,000 hectares of plantation in Malaysia and Indonesia. It is also the major shareholder of another plantation company listed in Singapore, Bumitama Agri Limited (SGX: P8Z), through its 31.4% stake.

The company generated a revenue of RM11.7 billion and a net profit of RM630 million in 2016. It is currently trading at about 45.0 times its earnings and offers a 2.0% yield. It has a market capitalization of RM29.1 billion.

Kuala Lumpur Kepong Berhad (Bursa: 2445) or KLK is also a conglomerate with a palm oil and property business. It manages a land bank of about 270,000 hectares in Malaysia, Indonesia, and Liberia. Similar to IOI Corporation, KLK also manufactures other downstream products like oleochemicals. KLK still sees its plantation business as its core business and has a property business mainly located in Malaysia.

KLK generated a revenue of RM16.5 billion and a net profit of RM1.6 billion in 2016. Today, it is trading around 20.6 times earnings and gives a dividend yield of 2.0%. It has a market capitalization of RM25.8 billion.

The Genting Group, most well-known for its gaming business, is also one of the largest players in the plantation industry in Malaysia. Genting Plantations Berhad (Bursa: 2291) owns a landbank of 227,000 hectares in Malaysia and Indonesia. Apart from its upstream and downstream business of palm oil, it has a sizeable property development business.

The company also has biotechnology ventures which focus on research in the development of oil palm yields and other related areas.

Genting Plantations produced a revenue of RM1.5 billion and a net profit of RM367.5 million in 2016. Currently, the company trades at a price to earnings ratio of 23.3 times and has a dividend yield of 0.9%.

Felda Global Ventures Holdings Berhad (Bursa: 5222) is a government-linked company and claims to be the third largest oil palm estate operator in the world. It has a total landbank of 450,000 hectares in Malaysia and Indonesia. After its initial public offering in 2012, the company has since ventured into many other businesses. Today, Felda Global Ventures counts palm oil, logistics and sugar as its key businesses.

Unfortunately, the company is currently facing a huge scandal with regards to some of its dealings over the years. Many of its board members and top management have been changed.

The company produced a revenue of RM17.3 billion and a net profit of 29.6 million in 2016. It currently trades at 206.0 times earnings and has a market capitalization of RM5.8 billion.

In 2016, United Plantations generated a revenue of RM1.23 billion and a net profit of RM330 million for its shareholders. That is almost the same as Genting Plantation and just half of IOI Corporations. However, both have a landbank of about four times the size of United Plantations.

Moreover, it is a company with very consistent profits. Over the past ten years, it has been able to achieve a return on equity ranging from 12% to 21% — highly respectable figures. United Plantations trades at a price to earnings of 16.3 times and a yield of 1.50%.

How do they stack up against one another? 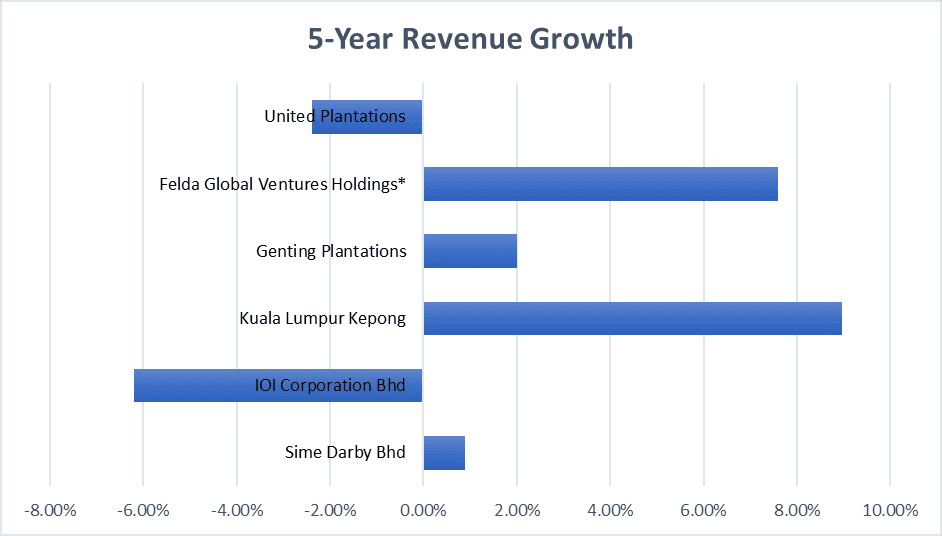 *Felda Global Ventures’ data is based on the past four years as it IPOed in 2012.

The past five years have been bad for the palm oil plantation industry. However, as some of the companies are conglomerates, the growth rate among the six companies differ greatly. Among the group, KLK and Felda Global Ventures have been most aggressively increasing its revenue, clocking in growth rates of 8.97% and 7.6% per annum respectively over the past five years. 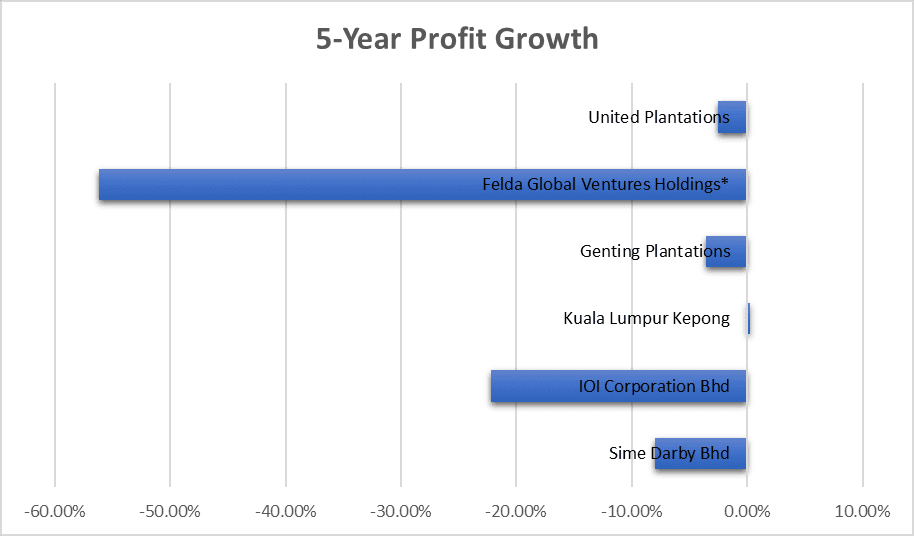 *Felda Global Ventures’ data is based on the past four years as it IPOed in 2012.

However, none of the group have been able to grow its profit significantly over the past five years due to the poor business environment in the industry. Only KLK was able to grow slightly at 0.28% per annum over the past five years. Felda Global Ventures Holdings saw its business declining 56.2% per annum due to mismanagement and overexpansion. The company is currently under investigation by the Malaysian Anti-Corruption Commission. 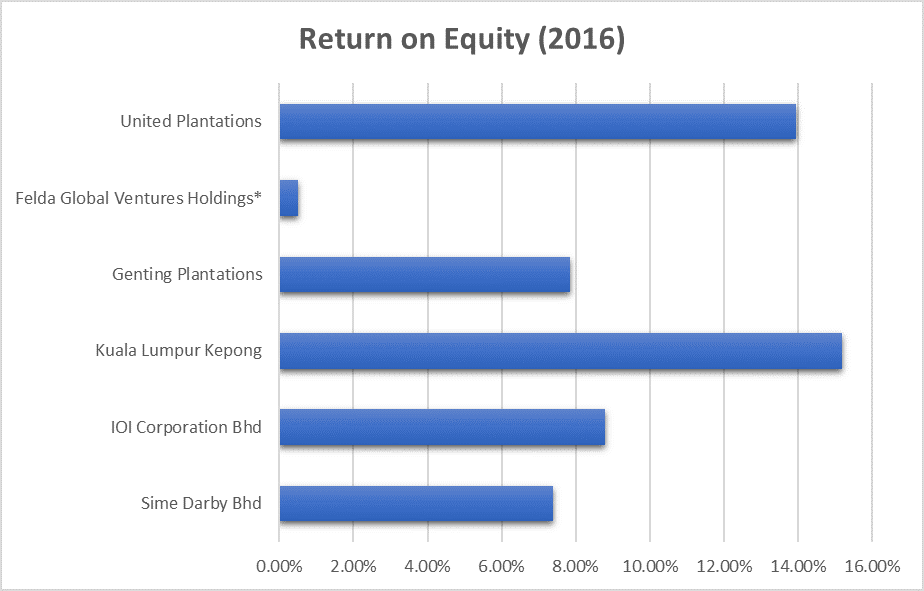 Return on equity might be the most accurate measure on how well the company is managing its plantation. We are able to see that in this area, KLK and United Plantation have been able to achieve an ROE of more than 10%, which is highly respectable in the industry. 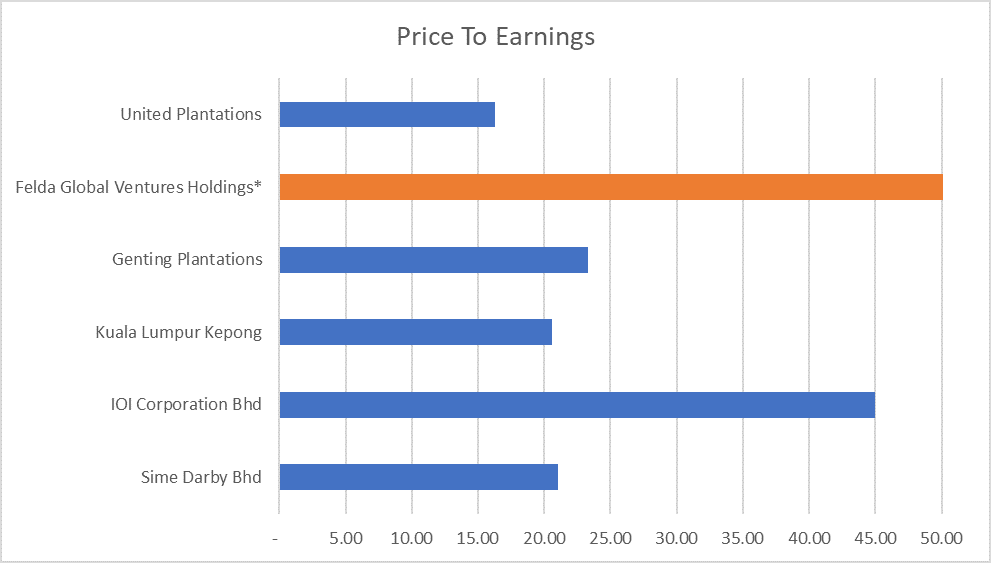 In term of valuations, we are able to see that United Plantations seems to be the cheapest among the group, with a price to earnings ratio of just 16.3 times while all its peers are trading above 20. 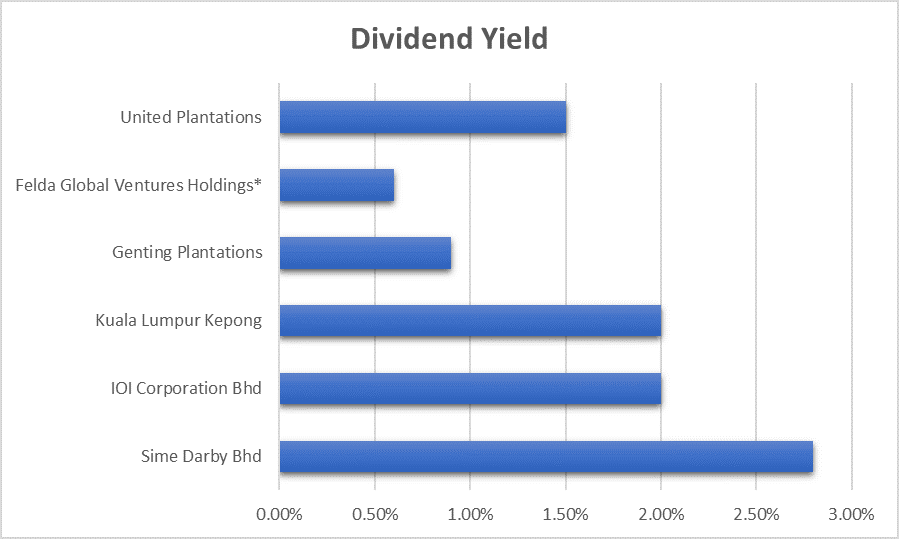 The dividend yield tells a slightly different story. Interestingly, the large cap companies such as KLK, IOI Corporation and Sime Darby were able to generate a much higher yield for investors compared to the rest. This is due to their higher payout ratio compared to companies like United Plantations.

According to palm oil statistics, the total planted area for oil palm is about 14 to 15 million hectares in 2014. This figure is still growing and we are seeing some of the largest players in this industry here. How these giants change their strategy will affect the future of this industry.

However, with our examples, it also shows that in the world of palm oil, bigger might not necessary mean better. When we invest in palm oil related companies, it is important to know both their plantation size and also their operating efficiency. Within the group of six, companies like KLK and United Plantations have shown to be able to generate much higher return on equity for shareholders while providing a reasonable yield as well.