“Interest rates act like gravity on asset values – The higher the rate, the greater the downward pull. That’s because the rates of return that investors need from any kind of investment are directly tied to the risk-free rate that they can earn from government securities. So if the government rate rises, the prices of all other investments must adjust downward, to a level that brings their expected rates of return into line.” – Warren Buffett

If you’ve been following the news recently, you would know that interest rates recently reached a 7-year high and investors are starting to get worried over interest rates. Why are interest rates so important? Let’s first discuss what they are, how they affect you, and what you can do. 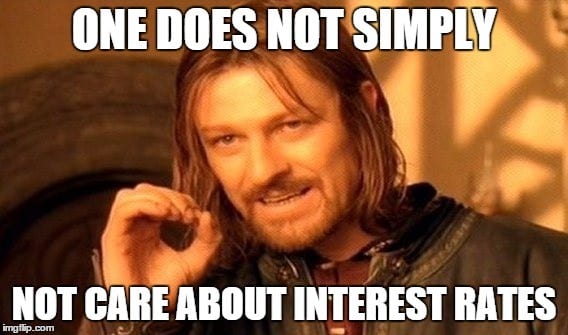 So what are interest rates in Singapore’s context? It’s the yields of our government securities like the 10 or 30-year SGS bonds. More specifically, the rates that will affect everything else would be the SIBOR (Singapore Interbank Offered Rate) and SOR (Swap Offer Rate), which are typically offered in shorter tenures – 1, 3, 6, and 12 months. You can check the latest SIBOR/SOR rates from the ABS website.

The actual calculations for these interest rates is complicated but this article will focus on the macro issue of interest rates so we’ll leave the intricacies out.

Both rates are starkly different in calculations but they tend to move in tandem as they are highly correlated and never in opposite directions. Being pegged to the USD/SGD, SOR is obviously more volatile in nature.

Why do Interest Rates Act like Gravity on Assets?

Using the Singapore context, most loans are pegged to either the SOR or SIBOR, therefore making the interest payments on loans vulnerable to the volatility in interest rates. As you’ve probably heard countless times that the U.S. Federal Reserve might raise interest rates soon and this directly affects the interest rates in Singapore.

How does this happen? The very fact that the Fed is thinking about raising interest rates causes an upsurge in the US dollar, this means the USD/SGD goes up, which translates to the SOR increasing and SIBOR following suit.

And what happens when interest rates increase? Homeowners with mortgages, companies with debt, or anyone with a loan will have to pay higher interest payments if their debt is pegged to either the SIBOR or SOR. And having to pay higher interest means having less money for other pursuits such as capital spending for companies or spending in general for homeowners. In short, less money is being funneled into the economy — what you call ‘tightening’.

In corporate finance, the most basic valuation method many professionals rely on is the venerable but highly criticized discounted cash flow (DCF). As money is affected by time, all future cash flows (FV) have to be discounted to the present day. Future cash flows are the numerator, whilst the discount rate (r) is the denominator.

Discount rates are usually set using the risk-free rate as a benchmark, which could be the 5, 7 or 10-year Treasury bond as a reference point. A slight increase in interest rates would cause a big movement in those risk-free rates, which then affects the entire DCF formula. As the denominator (interest rate) increases, the intrinsic value of your stock decreases.

What does he mean by “So if the government rate rises, the prices of all other investments must adjust downward…”?

Let’s do an example.

Assume the ten-year Singapore government bond yield is 3%, and since Singapore’s credit rating is AAA, the chances of the government defaulting on its bond payments is close to zero, therefore making a ten year investment in that bond virtually risk-free.

When interest rates increase, bond prices go down, which in turn increases the bond’s yield. Let’s assume interest rates have increased and the ten-year Singapore government bond now yields 4%. The spread between the Capitaland Mall Trust’s yield and the bond now narrows to just 1% (assuming all other factors don’t change).

Here’s the rationale: Why should I invest my hard-earned money in a stock (which is more risky) when I can invest the same amount in a risk-free instrument like a Treasury bond that gives almost the same return?

The market isn’t stupid, so that’s why you see REITs being severely battered recently during the Taper Tantrum of 2013. However, asset mispricing can occur during kneejerk overreactions from the market, which brings about great trading and investment opportunities. An example would be that of REITs being battered so low that it made them undervalued for a few days before bouncing back up.

What Can I Do in a Rising Interest Rate Environment?

When doing your due diligence, it’s perhaps wiser to use a conservative risk-free rate assumption. If the market’s risk-free rate is 2%, assume 4-5% especially when you sense an impending rate hike. The new intrinsic value of the stock you now derive from that change would be able to give you a more realistic outlook.

Beware of companies with high debt loads with early maturities. If a company constantly loads up on debt to finance their operations (which isn’t necessarily a bad thing) its management should be prudent in managing the maturities of its debt. If you think interest rates will rise in 2016, and you see a company with a massive debt load mostly maturating in 2016, you’ll know that they need to refinance those debts. They could be in trouble as they have to refinance their debt at a much higher interest rate. The market would then act accordingly and punish its stock for its mismanagement when interest rates do rise.

Contrariwise, a similar company with similar debt loads but with varying maturities would be able to prudently lock-in low interest-bearing debts in a low interest rate environment and spread out their maturities over the long-term to prevent any rude surprises in the inevitability of a rising rate environment.

An example of a debt-laden company but with varying maturities is Keppel Corporation: 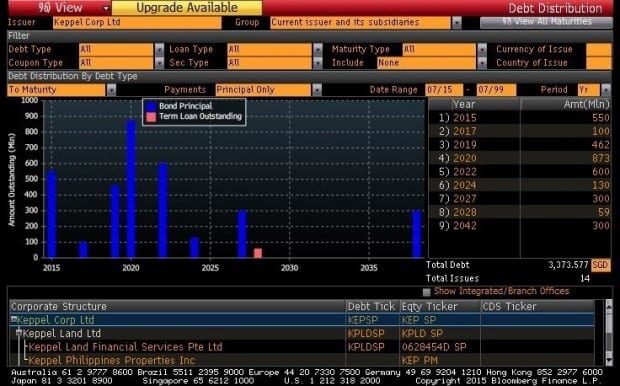 What about Bond Investors?

How about the flip side of the capital structure? What if you’re a fixed-income investor? If you’re already holding bonds in a low rate environment, the natural consequence of a rate hike is the diminishing value of your bond holdings, especially if their maturities are long.

If you plan on investing in bonds, know that bonds with long maturities will be hardest hit in a rising rate environment. It’s best to use the laddering strategy whereby you invest in bonds with different maturities, so that you can roll over each bond and reinvest your monies prudently in bonds that are issued at a higher interest rate environment, locking in a higher rate.

The new Singapore Savings Bond scheme is an attractive program initiated by MAS which provides an easy alternative for investing your money in bonds at a risk-free rate with no penalty on early redemptions. This is also another way to protect your capital in a rising rate environment.

As we follow suit, our economy might not be as strong or growing as fast as the U.S., thus putting us in a predicament of a tightening environment amid a weakening economy (our GDP actually fell 4% last quarter) and currency. A triple whammy.

The inverse happened immediately after the global financial crisis, where Singapore’s economy wasn’t as adversely affected as the U.S. but as Singapore’s interest rates mirrored the Fed’s lowered interest rates, we experienced aggressive asset inflation in the form of burgeoning property prices.

Our rates remained near zero, causing property prices to surge at a dramatic rate, inflating an asset bubble huge enough that the government had to step in and introduce cooling measures three times. If we had intervened earlier to raise our interest rates, it might’ve slowed the sharp spike in property prices, bringing the prices back down to earth, like gravity.

Knowing this as an investor, you can track how Singapore is doing relative to the U.S. to determine how we’ll be affected and make better informed decisions.

[**Do you know that investing in the ‘highest’ yield stocks can lose you money? Here are 3 reasons/checklist you need to pay attention to when investing for dividends – Click Here ]
Tags
bonds CapitaLand Mall Trust interest rate Keppel Corporation SIBOR Singapore USA Warren Buffett