In his regular letter to Oaktree clients, Howard Marks wrote about market liquidity and its potential dangers investors often overlook. I highly encourage readers to read it as it points out various key issues on liquidity and behavioral economics.

One of the key quotes from Marks sums up this entire article:

“Liquidity is ephemeral: it can come and go.”

What does Howard Marks Mean by That?

When analyzing key risks in any security, liquidity would always be one factor amongst the endless list of risks involved. Investors usually glaze over liquidity and look at more substantive risks such as interest rate risks for bonds or stocks, foreign currency risks, credit risks and general business risks.

It’s easy to see why liquidity risk is often overlooked – its effect on price (or lack thereof). Liquidity has close to no perceivable impact on the pricing of a security, whereas interest rates pose a more material and significant risk to prices.

The abovementioned risks do impact prices more directly, unlike liquidity risk. This then begs the question: why is liquidity risk always listed in so many analyst reports or caveats in investments when it has little to no impact on price? Is it just there to protect the writer of the report against any liability?

Liquidity risk is often overlooked but it’s arguably the most important risk to consider in all instruments, especially in times of crisis. 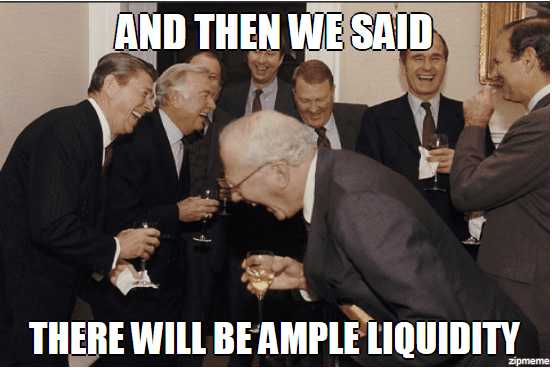 Investors usually assume liquidity means a stock has an average of 1 billion shares traded daily. The US$5 trillion/day forex market means currency trading is the most liquid, and therefore completely throwing liquidity risk out the window. They’re partially right; in a normal, non-volatile trading environment such as a trending market, liquidity is often present, provided by fellow market participants and market makers.

Liquidity risk is also often in the minds of institutional investors as they trade in big volumes, affecting liquidity and pricing. Buying 100 shares of Singtel would be easy to execute, but 50 million shares would be a different story altogether. Institutional funds wishing to load up or dump a stock would have to thread carefully when executing their trade as a big demand/supply of shares would move the stock price against their favor as the market catches wind of their intentions, or worse, have no liquidity at all to execute said trade.

How Illiquidity Caused the EUR/CHF to Plummet

A recent example of illiquidity causing massive financial losses would be the Swiss National Bank removing the EUR/CHF ceiling at 1.20. That move sent EUR/CHF plummeting by as much as 40% in a few minutes, unheard of in forex markets and considered a black swan event.

When everyone started selling Euros against the Swiss Franc and there seemed to be no buyers, it exacerbated the magnitude of the selling, which precipitated a larger downward move, which scared more holders into being sellers, and scared even more sellers into selling at fire-sale prices in hopes of finding buyers. The falling prices deterred buyers, perpetuating a vicious cycle in a matter of seconds which sent the EUR/CHF plunging.

Several investment banks, forex brokers and hedge funds incurred heavy losses, with one particular hedge fund, Everest Capital, going belly up. Liquidity could be considered as one of the key factors for such huge losses.

Several forex brokers incurred massive losses due to commitment to clients: guaranteeing stop losses. In an illiquid market, a stop loss doesn’t count for anything if your broker doesn’t guarantee it, and you’ll soon find yourself facing a margin call, or worse yet, be in debt as the losses are so large it exceeds your capital. As brokers can’t sell off fast enough at stop loss levels, they too exacerbate the problem of panic-selling at deep red prices, and those that didn’t guarantee stop losses for clients saw their accounts incur huge losses.

Another example of illiquidity would be that of the infamous 2008 subprime mortgage crisis. The frozen capital markets by which banks were too afraid to lend to another is a classic example of evaporated liquidity – not a single cent of product was traded at the height of the crisis despite having fire-sale prices tagged to them; everyone was afraid.

Everybody turned into sellers. Those that sold early know all too well not to trade such products again. With no buyers, there wasn’t a price that anyone could agree and rely on to mark their products (toxic collateralized debt obligations). Losses then ballooned, banks fell one by one until the last straw which was Lehman Brothers’ bankruptcy that instigated the US government to finally inject much needed liquidity into the credit markets to keep things going.

Consequently, because of the unprecedented amounts of liquidity in the markets financed by central banks globally, a slight tightening like the Yuan devaluation or even speak of an interest rate rise can spook markets. The world is currently drowning in cheap money, and when someone big enough like the Fed finally withdraws the addictive drug, liquidity would be the key concern in not just monetary policy terms but also securities trading as volatile markets tend to vaporize liquidity.

Why Bonds are Generally Illiquid

The OTC bond market in Singapore is an example of a generally illiquid market. It’s reserved for accredited investors with private banking accounts due to the minimum lot size of the bonds traded – usually S$100,000 or S$250,000 a pop.

As there’s no visible exchange, prices quoted are simply based on a handful of sellers and buyers via their intermediaries, therefore the huge bid/ask spread in the bonds. Oil and gas companies with OTC bonds have seen their bond prices plummet, some trading at 80 cents on the dollar. If you’ve bought that bond on margin, it could’ve triggered a margin call. If you can’t shore up additional collateral, the bank will do a force-sale which would inevitably sell your bond at a very low price due to illiquidity.

Risk management would be key here as with all investments, but liquidity risk would be of the greatest importance in this market due its non-transparent nature.

What Do I Do As a Regular Investor?

In the above-mentioned letter by Howard Marks, he noted that by providing liquidity in times of illiquidity one could reap out-sized returns. Basically buying when everybody else is selling, conforming to the Buffett adage of being greedy when others are fearful. It’s easier said than done, but both Marks and Buffett have reaped market-beating returns for their funds over the years by doing just that.

Liquidity is omnipresent in every security, yet it faces the risk of vanishing in times of distress. Margin of safety is often thrown around to fit into constructs like these, it works but its definition would have to be altered slightly to account for time.

An illiquid investment isn’t a bad idea if the underlying asset is fundamentally sound. Instead of using a margin of safety just for the pricing of the investment, use it for your time horizon as well. If you have a short-term view on the investment, you’re exposed to higher liquidity risk as liquidity can vanish when you need it most to sell. If you do have current investments that you’re afraid of future illiquidity, you’ve not done enough due diligence or have the emotional forte to withstand market shocks, or are simply over-invested. A long-term view would enable you to ride out both liquid and illiquid times in the market, minimizing the risk as it only affects you when you trade.

An easiest example and of highest relevance would be the real estate market. Almost every Singaporean would have this in mind when they’ve hit their prime years with enough cash and CPF (ample “liquidity”) to afford a house. The property market is notoriously illiquid despite the various transactions you see in the papers. If one is new to investing in stocks or bonds, try using this illustration describing how illiquidity affects properties as well:

In a good market, house prices go up, interest rates are low (below the HDB 2.6% rate), en bloc sales are everywhere, property transactions are high. Newspapers report jubilant buyers selling at ridiculous prices. There’s ample liquidity in the property market, if you’re a seller you can easily find a buyer.

On the contrary, in a tightening market as we’re experiencing now, property prices are declining, interest rates are creeping up with the economy slowing, property developers are left with some unsold units, unable to find buyers. Sellers of property would also have trouble finding buyers, they’d have to lower prices to be more attractive. This is what some call a “buyer’s market”. Liquidity is still present albeit at much lower levels.

A substantially illiquid real estate market would be that of the 1997 Asian Financial Crisis – the general market tanked along with the economy, property prices fell sharply as well, creating a vicious cycle of selling. Times of distress are rare but when they do happen, it’s easy to say that one should be a net buyer of assets when everyone’s heading for the exits. It takes prudent financial management, a highly disciplined approach to investing and strong mental fortitude to jump in.