Since its listing in 2005, Axis REIT (Bursa: 5106) has seen its portfolio size grow from RM339 million to RM2.24 billion in 2016. From just five properties at IPO, Axis REIT now (as at 31 December 2016) has 39 office and industrial properties located in Klang Valley, Johor, Penang, Negeri Sembilan and Kedah. In 2008, the REIT was reclassified as Shariah-compliant and is thus the world’s first Islamic office/industrial REIT. As an Islamic REIT, Axis is able to attract local and foreign Shariah-compliant funds and grow its asset base with new strategic partners.

Here are 12 things you need to consider about Axis REIT before you invest.

1. From 2012 to 2016, gross revenue grew 25.6% from RM132.6 million to RM166.7 million. Gross revenue grew in 2016 mainly due to incremental rental income from the acquisition of six properties and from positive rental reversions achieved during the year. Despite continued economic headwinds and a soft rental market, Axis REIT achieved a 92.0% occupancy rate, and a tenant retention rate of 86.4% with overall 3% positive rental reversion (as at 31 December 2016).

2. As an Islamic REIT, Axis has tapped into Islamic revolving credit facilities and Islamic term financing facilities, including funding sources like the sukuk market, from foreign and the ‘Big Four’ local Islamic financial institutions. Total financing has increased from RM549.3 million in 2012 to RM780.7 million in 2016 mainly due to fund the acquisitions of properties. Average gearing ratio from 2012 to 2016 has remained stable between 32% to 35%. Even though it has dropped over the years, financing cost cover remains healthy at 3.8 times in 2016.

3. Axis REIT completed five acquisitions totaling RM103 million in 2016. They are Beyonic i-Park Campus Blocks A, B, C and D at RM61.0 million, and Scomi Facility @ Rawang at RM42.0 million. In July 2017, Axis REIT acquired Kerry Warehouse at Pasir Gudang, Johor. The property has a tenancy of approximately 3.5 years with Kerry Ingredients (M) Sdn Bhd and will bring additional rental of RM228,200 per month. Overall, Axis REIT’s space under management has increased more than six-fold from 1,186.053 square feet in 2005 to 7,606,863 square feet in 2016.

4. Axis REIT’s average portfolio occupancy rate has remained above 90% over the last five years. Out of its 39 properties, 10 have occupancy rates below 90% as at 31 December 2016. 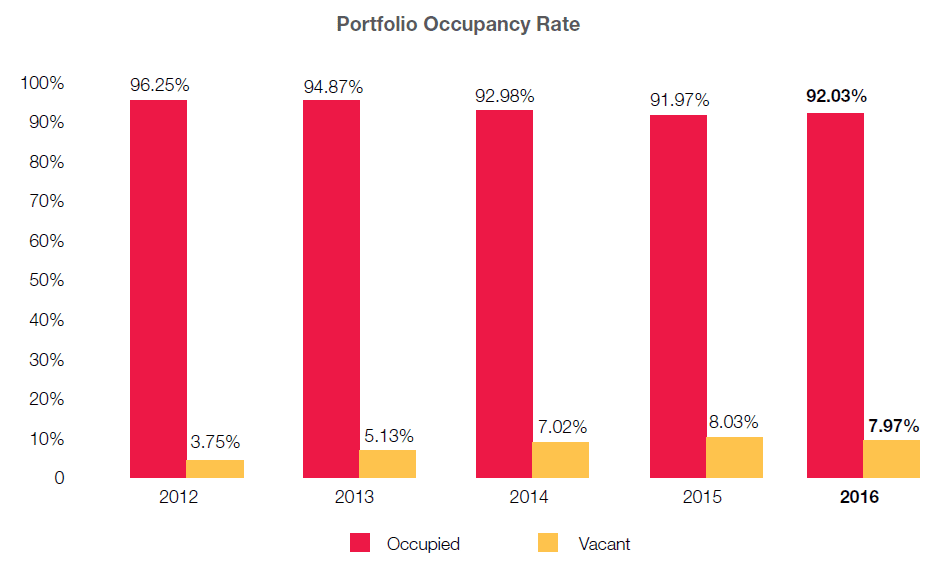 5. Axis REIT owns a diversified range of properties including office, office/industrial, hypermarkets, warehouse logistics and manufacturing facilities. Therefore, the risk of overexposure to one industry is reduced although warehouse logistics still comprise the bulk of the REIT’s assets. 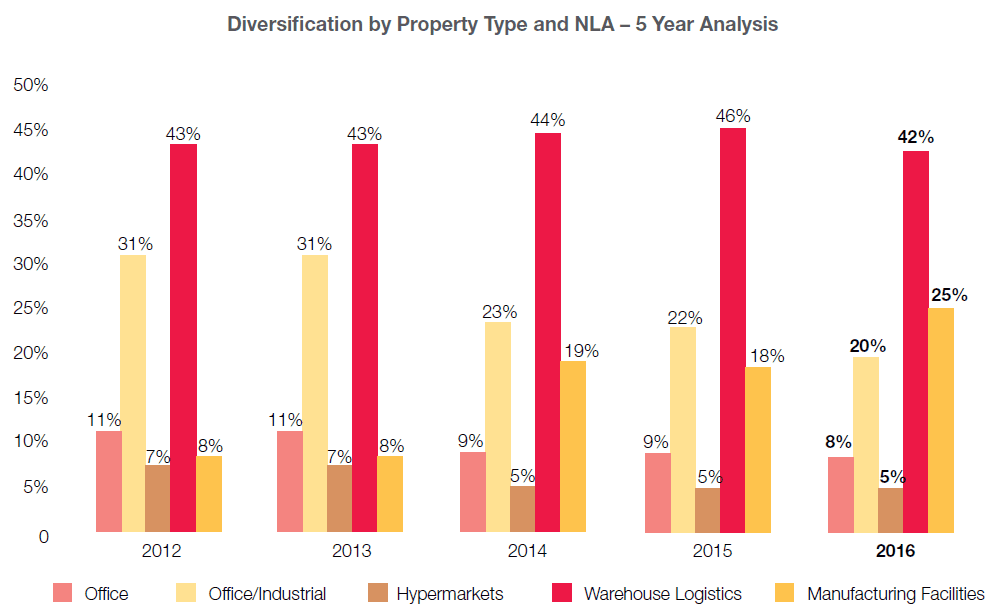 7. A total of 1,938,654 square feet (17.48% of NLA) is up for expiry in 2016. According to management, it has successfully renegotiated most of the tenancy renewals and already managed to retain 86.4% of tenant space up for expiry this year. Axis REIT also staggers its lease expiry profile so only a percentage of its leases (15-17% of NLA) expire annually.

*Distribution per unit adjusted to reflect the 2-for-1 split in September 2015. Source: AXIS REIT annual report

9. IDRP (Income distribution reinvestment plan, or more commonly known as DRIP) was first introduced in December 2011. Since 2013, the average total return from IDRP from 2013 to 2015 is between 14-19%. Unitholders receive new units at an implied discount of not more than 10% discount to the five-day volume weighted average market price (VWAMP) before the price-fixing date. For example, the 7th IDRP was offered at an 8.35% discount to the VWAMP at a price of RM1.50. 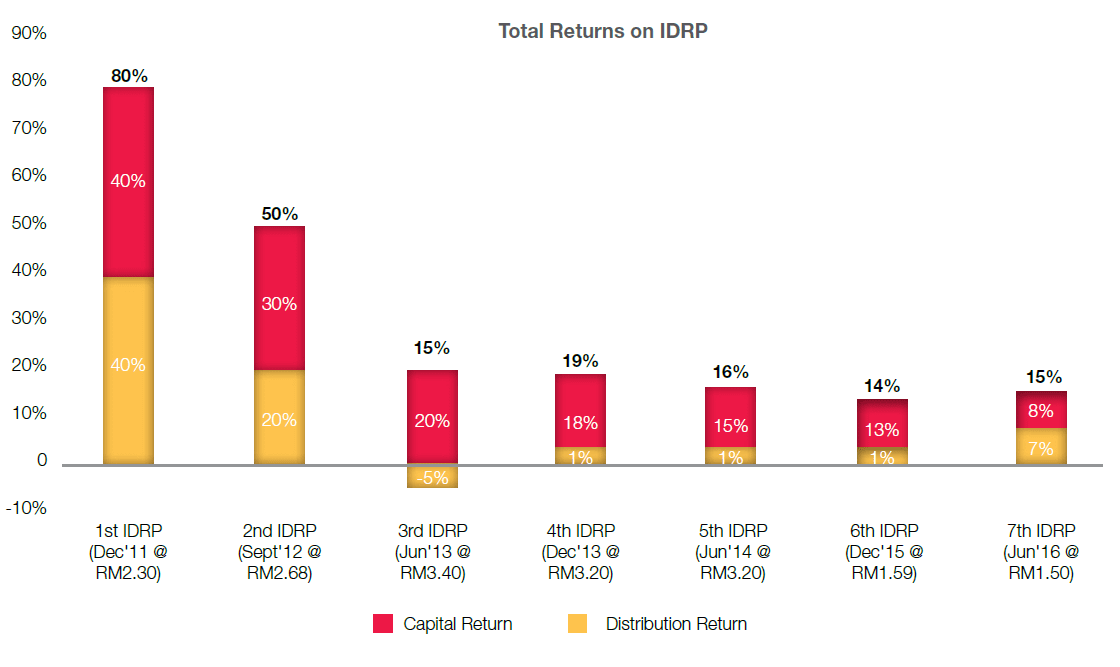 10. Axis REIT completed the disposal of Axis Eureka for RM56.1 million on 8 March 2017, with a total realized net gain of RM1.35 million. The rationale for disposing the five-year owned property is it has limited upside for rental growth and a favourable selling price. The gains will be distributed to unitholders (additional distribution of 0.13 sen per unit) while the capital, net of incidental disposal cost, will be used to reduce gearing slightly from 35% to 34%.

11. One of Axis REIT’s most significant highlights in 2016 is the development of the Nestlé Distribution Centre – a 515,000-square feet distribution warehouse facility for Nestlé which will occupy half of the Axis PDI Centre site. The centre, which will take up 24.78 acres of the 50-acre property, is the first phase of development of AXIS PDI Centre and is on track to be completed by end of 2017. Axis has secured an initial lease term of 10 years with Nestlé commencing in June 2018, with the option to renew for a further two terms of three years each (i.e. 10+3+3). Axis estimates to derive an annual rental income of RM19.22 million, with 10% rent step-ups every three years. This is a significant increase of more than 200% in annual income from this asset from the previous tenant.

12. Axis REIT will continue to source for and acquire potential assets based on the following criteria:

The management has indicated that its total estimated acquisition cost for 2017 will be RM170 million. As all of Axis REIT’s 39 properties are currently located in Peninsular Malaysia, the management may consider exploring potential acquisition targets in East Malaysia.