This will be the final instalment in the Battle of the Telcos series and I believe you over the last three articles have a clearer grasp of Singtel, M1 and StarHub’s business models and the unique strengths and challenges each company has.

For this instalment, we are going to analyze five key financial metrics across Singtel, M1 and StarHub and conclude which telco is best positioned to handle the increased competition that’s going to arise when the forth telco comes online in Singapore soon.

Singtel, M1 and StarHub have consistently grown their net profit for the past ten years. While that may sound like good news, the growth has been rather lackluster; the average annual growth rates are 2.74%, 1.38%, and 4.32% for Singtel, M1, and StarHub respectively. M1 has the lowest profit and growth among the three. 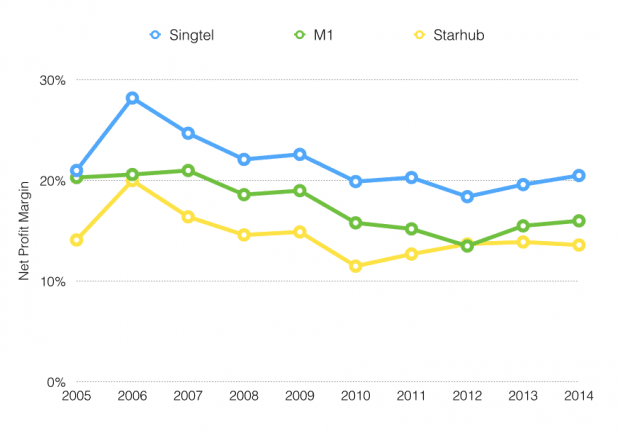 The net profit margins of Singtel, M1 and StarHub have been decreasing overall and stabilized only from 2010 onwards. The falling margins are an indication of growing competition among the telcos as they fight for same consumer dollars in a small local market. Singtel is an exception as they have regional operations and their net margin of 20.5% is highest among the three.

Debt-to-cash flow is an important ratio for because telcos often borrow high loan amounts to finance their business operations. They’re able to take on higher levels of debt because their business models allow them to generate extremely predictable cash flows. For example, a customer is usually locked up for two years when they sign up for a mobile plan (and you can expect most customers to pay their bills on time every month).

Instead, the debt-to-cash-flow ratio is more useful – it measures how quick a company can pay off its debt with its cash flow. For instance, Singtel’s debt-to-cash-flow is 1.6 which means they can repay their entire debt in just 1.6 years with their current cash flow. This shows just how high their cash flow levels are compared to the amount of debt they have.

A cash-flow-to-debt ratio below 3 is ideal and all three telcos pass this benchmark easily.

The traditional dividend payout ratio uses net profit in its calculations. But as you know, telcos usually generate high quality earnings which means their cash flows are equal or higher than their net profits. Profits are also depressed compared to cash flows due to higher deprecation amounts because of capital expenditure.

So I prefer to use free cash flow instead of earnings for a telco’s dividend payout ratio in this instance. From the table above, all three telcos have been paying consistent dividend payouts to shareholders over the last ten years – great news for income investors. In particular, StarHub has had the highest payout ratio among the three telcos in six of the last ten years.

Singtel and StarHub have consistently increased their dividend per share over the past ten years (StarHub has maintained it at 20 cents the last five years). M1’s dividend per share has been more volatile but is generally on an uptrend as well. So if you’re seeking stable/rising dividends as an income investor, Singtel and StarHub look like better picks based on their track record.

[****Want a List of Stocks That Pay Dividends Even During a Crisis? Here are 10 Dividend Paying Stocks Every Investor Should Have In Their WatchList – Click Here To Download****]

So from what we’ve analyzed here and from the last three articles, Singtel and StarHub are better positioned to handle the heightened competition when the forth telco enters the market, while M1 looks most at risk:

Well, I hope you’ve enjoyed this Battle of the Telco series and gained a clearer insight and analysis into Singtel, M1 and StarHub (especially if you’re invested in any one of them!).

Oftentimes, investors research a company on its own and invest based on one set of data and numbers. While the data and numbers might look impressive on their own, it is imperative you do a comparison with peers across the same industry to gain a more well-informed overall analysis.

For example, some of M1’s numbers might look great on their own but you’ll only truly know when you compare them with similar companies in the same industry – and sure enough, they pale in comparison next to Singtel and StarHub.

Yes, it’s a lot more extra effort to put in (and something we do before we invest in any company) but nothing ever worth it comes easily. So if you want to consistently pick the best companies to invest in, this is something you have to knuckle down and get done.