CapitaLand Malaysia Mall Trust (CMMT) was listed on 16 July 2010 as one of the largest pure-play shopping mall REITs in Malaysia. At that time, it had an initial portfolio of three retail malls valued at RM2.13 billion. Since then, CMMT has enlarged its portfolio to five retail malls and an office building valued at RM3.97 billion in total as at 31 December 2017.

In this article, I’ll bring a detailed account of the performances of CMMT’s individual properties, their impact on CMMT’s group financial results, and discuss CMMT’s ability to deliver sustainable distributions to its unitholders in the near-future. Hence, here are 11 things you need to know about CapitaLand Malaysia Mall Trust before you invest.

1. Gurney Plaza is a prime lifestyle retail mall located at Gurney Drive, a popular seafront promenade in Penang. In 2010 when CMMT was listed, the mall was valued at RM850 million. Subsequently, CMMT purchased the Gurney Plaza Extension Property, a nine-storey retail extension block adjoining Gurney Plaza for RM215 million. As at 31 December 2017, Gurney Plaza is valued at RM1.58 billion, making it CMMT’s trophy asset. Overall, the mall has achieved higher rent rates, thus contributing to consistent growth in gross revenue from RM96.1 million in 2011 to RM145.7 million in 2017. 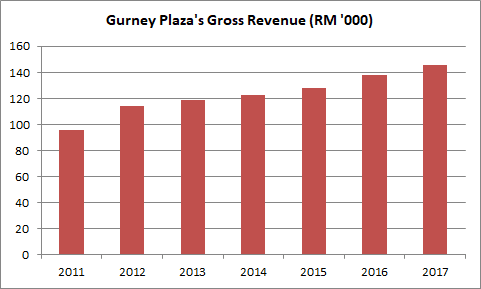 2. CMMT owns 453,768 square feet (or 61.9%) of the aggregate retail floor area of Sungei Wang Plaza, a popular retail destination at the heart of the central business district of Kuala Lumpur. This property is valued at RM583 million as at 31 December 2017, a 19.5% fall from its purchase price of RM724 million in 2010. The mall has reported a reduction in rents as it was affected by the ongoing MRT works and the closure of Bukit Bintang Plaza since 2013. Thus, this property has reported a decline in gross revenue from RM72.2 million in 2013 to RM37.9 million in 2017. 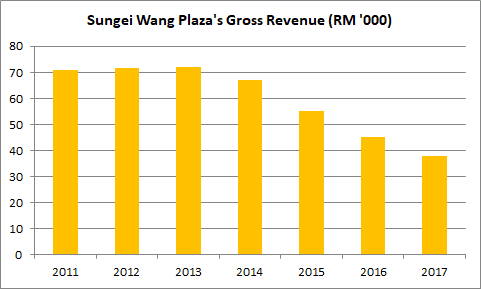 3. The Mines Shopping Mall forms part of the Mines Resort City which is an integrated retail, entertainment and business destination situated south of Kuala Lumpur. As at 31 December 2017, The Mines is valued at RM727 million — a 37.2% appreciation from its acquisition price of RM530 million in 2010. Gross revenue has grown from RM59.4 million in 2011 to RM81.5 million in 2015 before reporting a dip to RM75.6 million in 2017. The sales drop was caused by a reduction in the Mines’ occupancy rate over the last two years. 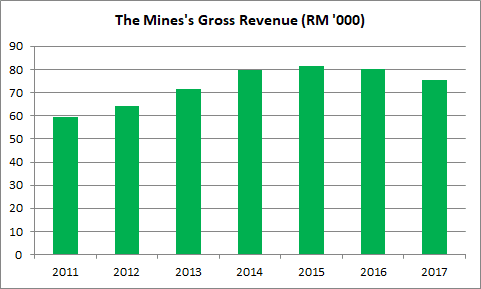 4. On 14 November 2011, CMMT completed its acquisition of East Coast Mall for RM310 million. It is a four-storey retail mall located at the city centre of Kuantan, Pahang. As at 31 December 2017, the East Coast Mall is valued at RM511 million. The mall has achieved higher rents, thus resulting in consistent growth in gross revenue from RM39.3 million in 2012 to RM59.5 million in 2017. 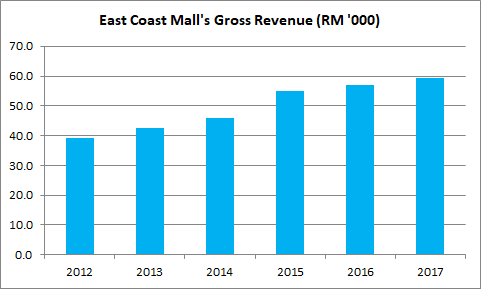 5. On 10 July 2015, CMMT completed the acquisition of Tropicana City Mall and Tropicana City Office Tower for RM540 million. The properties are located at the intersection of two major highways: the LDP and the Sprint highway in Petaling Jaya, a matured suburb that is closest to Kuala Lumpur. As at 31 December 2017, they are valued at RM570 million. Since its acquisition, the Tropicana properties have contributed RM50-55 million in gross revenue. 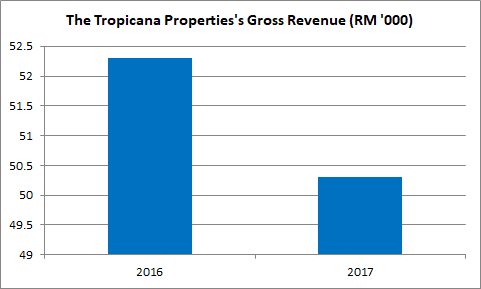 6. Overall, CMMT has achieved a CAGR of 8.12% in gross revenue over the last six years, from RM230.9 million in 2011 to RM368.9 million in 2017. This is contributed by consistent growth in sales achieved by Gurney Plaza, the Mines, and East Coast Mall, and its acquisition of the Tropicana properties. This offset the sales decline from Sungei Wang Plaza during the period. 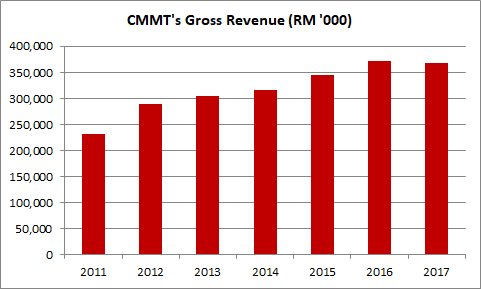 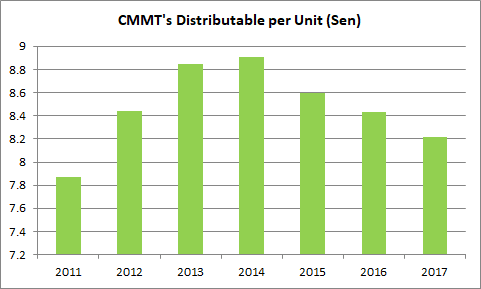 8. As at 31 December 2017, CMMT has a 32.8% gearing ratio which is comfortably below the regulatory limit of 50% of total asset value. It still has debt headroom to borrow which could be used for acquisitions or asset enhancement initiatives when the opportunities arise. Presently, its effective cost of borrowing is 4.41% and 80% of its borrowings are on fixed interest rates.

Read also: Top 5 Malaysian REITs that made you money if you invested from their IPOs

10. CMMT is heavily reliant on Gurney Plaza for a substantial portion of its income – the property contributed 44.1% of CMMT’s net property income in 2017. As such, any setback to Gurney Plaza would have a negative impact on CMMT’s overall performance.

11. On 25 January 2018, Bank Negara Malaysia increased its overnight policy rate by 25 basis points to 3.25%. The hike is the country’s first since 2014 and will lead to an increase in the cost of borrowings for companies and REITs, especially if they have loans which are based on floating rates. At the moment, CMMT is relatively unaffected for now as 80% of its loans are on fixed rates, but the cost of borrowings will most likely increase when CMMT refinances its loans in the near future.

Since its listing, the performance of CapitaLand Malaysia Mall Trust’s properties has been a mixed bag. Gurney Plaza and East Coast Mall are the main growth drivers while Sungei Wang Plaza was substantially impacted by ongoing MRT works and the closure of Bukit Bintang Plaza. The Mines and the Tropicana properties remained relatively stable.

Collectively, as a group, CMMT has recorded a decline in DPU since 2014, a disappointment to its unitholders as there are many REITs, in both Malaysia and Singapore, which have delivered consistent growth in DPU over the last 5-10 years. Perhaps, this explains why its stock price has dropped by around 45% from its peak of RM1.95 in January 2013 to RM1.05 as of 15 March 2018.

Conversely, CMMT’s relatively low price now means its dividend yield has increased. If CMMT is able to maintain its DPU at 8.22 sen, its net DPU to unitholders (after withholding taxes of 10%) is 7.40 sen. This means its current net dividend yield is a very decent 7.0%.

If you’re interested in learning how to invest for dividends, here’s just a quick reminder: 2018 applications to join Dividend Machines close Sunday, 18 March 2018, at 23:59 hours. If you’re looking for a way to learn how to invest in dividend stocks and REITs and build multiple streams of passive dividend income, then we highly recommend you check out Dividend Machines before applications close!

Happy investing and we hope to see you on the inside 🙂