Years ago, I went to a pub for a small get-together with a group of mates. After some pleasantries, a friend of mine signalled for a waitress to order a round of drinks. I, however, am not a drinker and had absolutely no idea which poison to pick.

So when the waitress asked what we’d like to drink, my mates went, “Kronenbourg!” “I’ll have Conner’s.” “Asahi Super Dry for me.”

When it came to my turn, I hesitated before saying, “Erm… I’ll have a Carlsberg.”

My friends exclaimed that was soon followed by a burst of laughter.

“Come on, Ian. Of all the beers you can possibly order here… you choose Carlsberg?”

They ribbed me further and insisted I change my order and give Asahi a try. I was then given a detailed lecture on beers by my mates and why Carlsberg is ‘probably not the best beer in the world’ (in their opinion, anyway).

But the get-together with my friends did fire a question in my mind: Why did I order a Carlsberg in the first place? And the answer was because Carlsberg is simply the first brand that pops into my head when I think of beer. As an investor, I noted that this sort of top-of-mind awareness is a measure of a strong brand. So I decided to do some research on Carlsberg Brewery Malaysia Berhad.

Carlsberg Malaysia owns a portfolio of international beer brands including (wait for it…) Kronenbourg, Asahi Super Dry, Conner’s and, of course, Carlsberg. (Sorry mates, you all got played by Carlsberg in the end.)

In addition, the company has other drink brands such as Somersby, SKOL, Royal Stout, Jolly Shandy, and Nutrimalt. Presently in Malaysia, it is one of only two breweries approved by the Ministry of International Trade and Industry – one of the economic moats Carlsberg Malaysia enjoys.

As I write, Carlsberg Malaysia is worth RM5.9 billion in market capitalization. In this article, I’ll give you an overview of the company’s 10-year performance, and its near-term risks and growth drivers. By reading this, I hope it helps you to understand Carlsberg Malaysia’s business model and financials better — which are two out of the four areas we evaluate in the Investment Quadrant when doing our stock research.

Here are 10 things to know about Carlsberg Brewery Malaysia before you invest.

1. Carlsberg Malaysia has operated from a manufacturing plant located at Shah Alam since 1972. Its operations in Malaysia remains the main revenue contributor and earns stable revenues of RM1-1.2 billion annually. 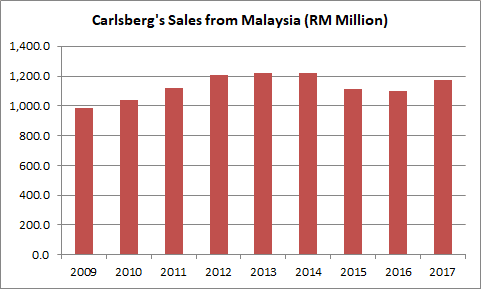 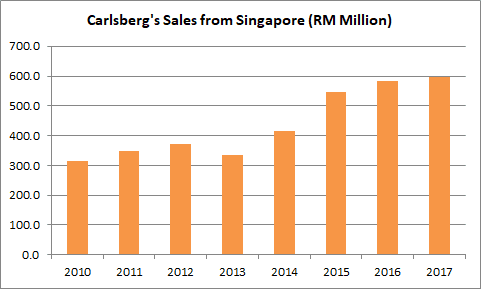 3. Carlsberg Malaysia has achieved a compound annual growth rate (CAGR) of 7.02% in group revenues over the last 10 years. It has grown from RM897.5 million in 2007 to RM1.77 billion in 2017. The sales growth is directly attributed to stable sales performance from its Malaysian operations and rising sales from its Singapore operations during the period. 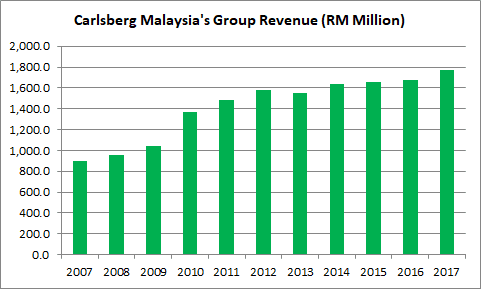 4. Carlsberg Malaysia has achieved a CAGR of 10.91% in shareholders’ earnings over the last 10 years. It has grown from RM78.5 million in 2007 to RM221.2 million in 2017. Profits have grown faster than sales as the company has focused on marketing premium beer brands such as Kronenbourg, Asahi, and Conner’s and implementing effective cost controls — in particular, reducing its selling & distribution expenses via better in-store execution. 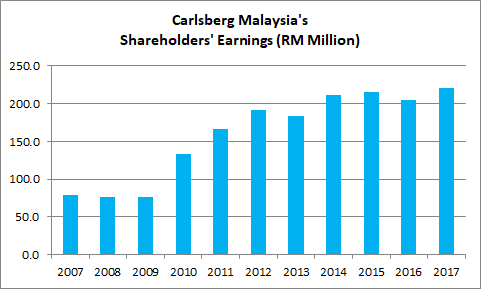 5. On 1 January 2012, Carlsberg Malaysia adopted the Malaysian Financial Reporting Standards replacing the Financial Reporting Standards it formerly used. Because of this, the company reset its foreign currency translation reserve to zero as allowed under MFRS. This caused a one-time adjustment to shareholders’ equity from RM627.1 million in 2011 to RM299.0 million in 2012. As a result, the company’s return on equity (ROE) figures after 2012 are substantially higher than years before. From 2012-2017, Carlsberg Malaysia has an average six-year ROE of 66.9%.

6. From 2008 to 2017, Carlsberg Malaysia has generated RM1.99 billion in cash flows from operations. Out of which, it has used RM269.0 million for capital expenditures and RM1.52 billion for dividend payments. Its steady cash flow means Carlsberg Malaysia is a cash-producing business and does not need to continually raise equity or debt to grow its business or reward its shareholders with dividends. 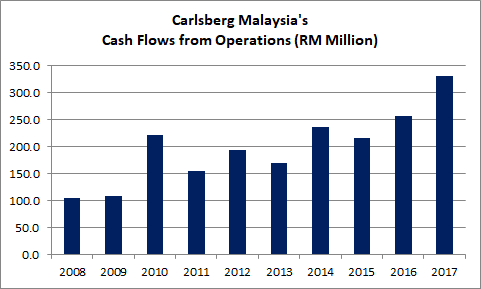 7. Carlsberg Malaysia has paid a steady and growing dividend since 2009. Dividend per share has grown more than eight-fold from 9 sen in 2009 to 77 sen in 2017. Based on its closing share price of RM19.46 as at 15 May 2018, its dividend yield is 4.0% — the lowest since 2011. From 2011 to 2017, the company’s dividend yield ranged between 4.5% to 6.1%. Moving forward, Carlsberg Malaysia has stated it intends to deliver quarterly dividends with a targeted dividend payout ratio of 75%. A special dividend will also be considered for the final quarter subject to the company’s cash requirements. 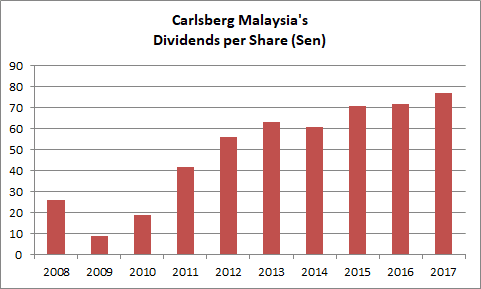 8. On 17 September 2014, Carlsberg Malaysia was issued two bills of demand amounting to RM56.3 million by the state government of Selangor. The first bill relates to excise duty of RM35.7 million from 1 July 2011 to 14 January 2014. The second bill relates to sales tax and a penalty of RM20.6 million for the same period. As I write, there are no new developments on the two bills and the company has mentioned that it doesn’t admit to any liability on them. This matter is currently in discussions with the relevant authorities and legal counsels. 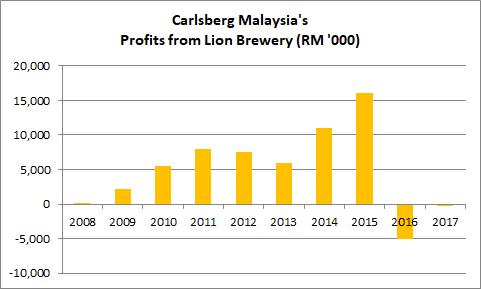 Carlsberg Malaysia has delivered consistent growth in revenue, profits, and dividends over the last 10 years. Moving forward, the Carlsberg group is embarking on a seven-year strategic plan known as SAIL’22. In Malaysia and Singapore, Carlsberg aims to strengthen its market position and continue to deliver a portfolio of brands with an increasing focus on international premium brands.

Through this article, I hope I’ve shown you how you can break down a company’s business segments, long-term financial performance, risks, and growth drivers to measure the quality of the company and assess its immediate outlook.

This is by no means a complete analysis — we still have to research a company’s key management, financial ratios, and stock valuation before we can decide whether its a stock worth owning at the right price.

This entire research system is called the Investment Quadrant —  a system that allows you to spot high-quality value stocks with strong factors for growth. While many stocks won’t be able to pass the test, when we do find a company that meets ALL the criteria, we may be holding onto a potential winner in our hands.