DBS Group Holdings Limited is the largest financial services conglomerate in Southeast Asia (followed by OCBC and UOB) and also currently the largest company listed on the SGX. DBS was set up by the Singapore government in 1968 to take over the industrial financing activities from the Economic Development Board. Today, DBS has operations in 17 countries and over 280 branches in Asia including Singapore, China, Hong Kong, Taiwan, India, and Indonesia. As I write, DBS is worth as much as S$73.6 billion in market capitalization.

In this article, I’ll bring a detailed account of DBS’s remarkable achievements thus far, the risks it faces and its outlook towards the near future. Here are 10 things you need to know about DBS before you invest. 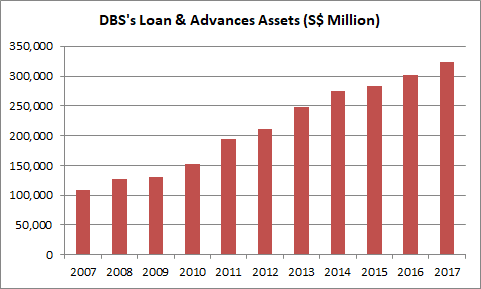 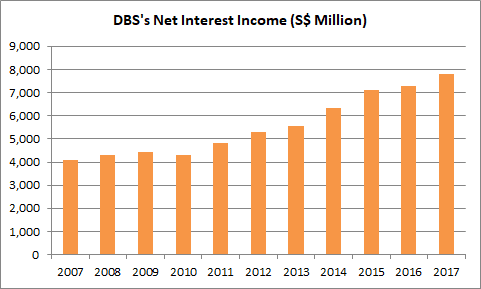 3. DBS has achieved a CAGR of 8.1% in non-interest income during the 10-year period. It has grown from S$2.1 billion in 2007 to S$4.5 billion in 2017. This is mainly contributed by steady growth in DBS’s fee-based and commission income which includes brokerage fees, transactional services, wealth management, cards, and investment banking services. 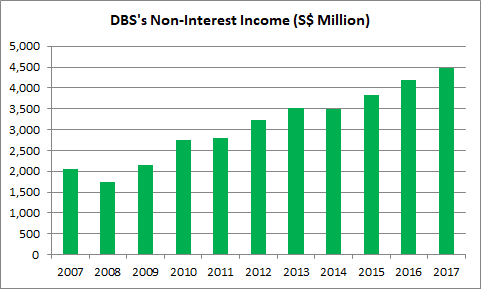 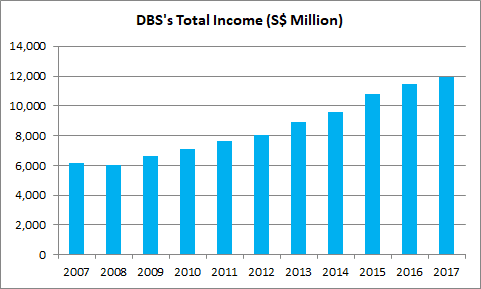 5. DBS has maintained its cost-to-income ratio at 40%-45% in the last 10 years. This has been achieved by DBS’s ongoing efforts to further digitize its business operations to save costs, boost efficiency, and to enhance the users’ overall experience with DBS. To name a few initiatives, DBS has launched digital products such as DBS PayLah!, DBS iWealth, and DBS Home360 to deepen its wallet share among consumers in its core markets of Singapore and Hong Kong.

6. DBS has achieved a CAGR of 6.7% in shareholders’ earnings over the last 10 years. Earnings increased from S$2.3 billion in 2007 to S$4.4 billion in 2017. This is contributed by continuous increment in DBS’s total income and a stable cost-to-income ratio during the period. For the financial year 2010, DBS reported S$1.6 billion in earnings — the lowest during the 10-year period. This was due to a S$1.0 billion impairment loss on goodwill arising from the acquisition of DBS Bank (Hong Kong) Ltd in 2010. Excluding this one-off loss, DBS would have reported S$2.6 billion in earnings which would be in line with DBS’s trajectory of earnings growth during the decade. DBS’s 10-year average ROE is 9.77%. 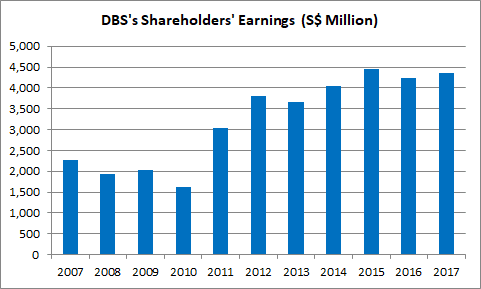 7. DBS has achieved a CAGR of 4.61% in dividend payments during the last 10 years. Dividend payments to shareholders have grown from S$1.1 billion in 2007 to S$1.7 billion in 2017. Evidently, DBS’s growth in dividend payments did not keep pace with its earnings growth. This is because DBS lowered its dividend payout ratio to 30-40% in from 2013 to 2017 compared to the previous five-year period from 2008 to 2012. It is an effort to strengthen its capital position to meet the capital adequacy ratio requirements set by the Monetary Authority of Singapore (MAS) as explained in point 9 below. 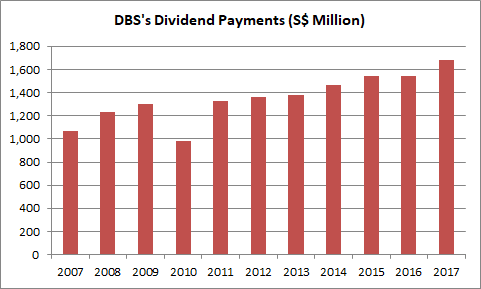 8. DBS reported a total capital adequacy ratio of 15.9% in 2017. It is in line with Basel III capital standards and above the minimum capital adequacy ratio (including buffer requirements) of 11.5% required by the MAS. Thus, DBS is well-capitalized as it has adequate capital resources to pursue business growth and investment opportunities while having a buffer to meet adverse situations arising from market, credit and operational risks.

9. In 2017, DBS reduced its exposure to the oil & gas industry by S$1 billion to S$21 billion. This was due to write-offs in its non-performing oil & gas support service segment as it was impacted by the decline in global oil prices. Hence, DBS reported a higher non-performing loan rate from 0.9% in 2015 to 1.7% in 2017, and loss allowance coverage declined from a high of 163% in 2014 to 85% in 2017. As I write, crude oil prices have recovered to around US$70 a barrel, a significant improvement from US$30-40 a barrel just a few years ago. DBS, however, will continue its efforts to limit its exposure to the oil and gas industry in 2018. Despite the recovery in crude oil prices, it will take time for oil and gas service companies to secure new contracts to improve their financial performance. The oil & gas service industry is also greatly dependent on crude oil prices which is cyclical. Thus, it is prudent for DBS to limit its exposure to loans disbursed to the oil and gas service industry as it remains relatively uncertain. 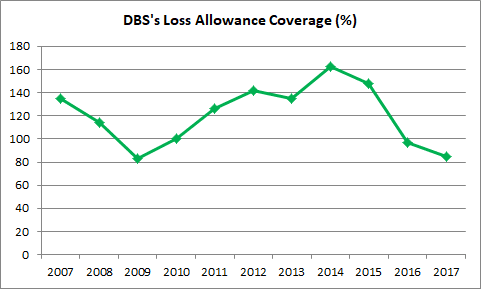 10. In August 2016, DBS announced the acquisition of ANZ’s wealth management and retail banking business in five markets which include Singapore, Indonesia, China, Taiwan and Hong Kong for S$110 million above book value. The portfolio of business acquired comprises total deposits of S$17 billion, loans of S$11 billion, and investment assets under management of S$6.5 billion. DBS completed the acquisition and full migration of these businesses from ANZ on 12 February 2018 and financial contributions from the acquisition will be reflected in financial year 2018. Moving forward, DBS has revealed several key targets for 2018 including loan growth of 7-8%, low double-digit growth in income and to maintain its cost-to-income ratio at 43%.

In summary, DBS has built a solid track record of delivering growth in total income, earnings, and dividends to its shareholders over the last 10 years. With ‘AA-‘ and ‘Aa1’ credit ratings by Standard & Poor’s and Moody’s respectively that are among the highest in Asia, DBS was also named the ‘Safest Bank in Asia’ for nine consecutive years from 2009 to 2017 by New York-based trade publication Global Finance.

Despite its successes, DBS is aware that it has to evolve in order to stay relevant in the twenty-first century. Today, banking is being redefined due to the ubiquity of mobile phones which has led the growth of digital and mobile banking over conventional methods like visiting a branch, the ATM, or even using a desktop computer. Hence, DBS will continue its efforts to further digitize its operations to become the ‘Digital Bank of Singapore’.

So is DBS Group a ‘good’ investment? The answer is: it depends. Are you able to find another company with comparable fundamentals trading at lower valuations or offering a higher yield? Does a bank stock like DBS suit your investment goals, time horizon, and risk profile? Will it also fit your portfolio capital allocation and diversification needs?

Knowing the answers to these questions and more will help you make better investment decisions in the long run.

Read also: Our 10-year performance summaries on OCBC and UOB