Deep value investing is the identification of attractive investment opportunities with limited downside and significant upside. In contrast to growth investing, we look at places with pronounced mispricing – in the unloved, neglected, ignored and feared stocks.

This investment philosophy was developed by Benjamin Graham, better known as Warren Buffet’s teacher. To give you an idea of the regard that Buffett has for Graham, he routinely describes Graham as the man who changed his life, and on the cover of Graham’s book The Intelligent Investor, Buffett writes simply: “By far the best book on investing ever written.” High praise from one of the world’s most successful investors.

In short, the crux of deep value investing is that any investment should have an intrinsic value substantially more than an investor has to pay for it. Instead of chasing growth and future returns, Graham believed in buying undervalued stocks with a large margin of safety between value and price – today.

In other words, Graham effectively made a profit the moment he bought a stock, not when he sold. He believed in applying rationality to his analysis, championing fundamental analysis. Companies he sought out tend to have strong balance sheets, little debt, and a long track record. 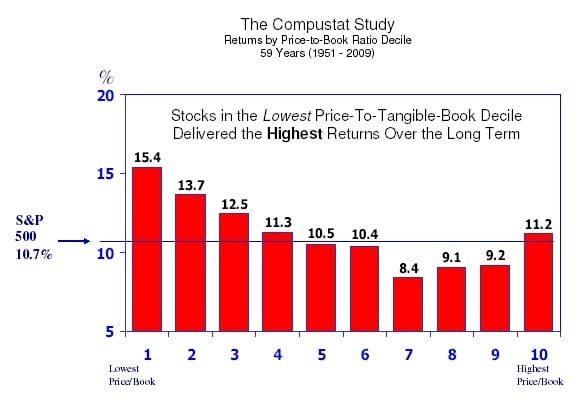 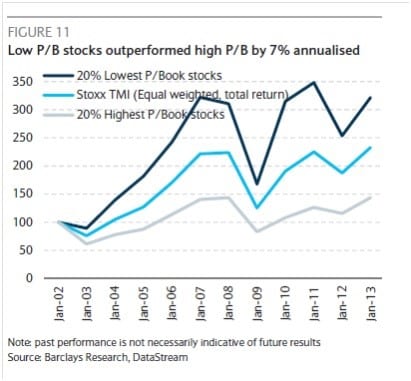 Another study by Barclays Research pretty much confirmed the results. In this study, the 20% lowest P/B stocks outperformed the highest 20% P/B stocks by 7% annualized returns across 12 years (2002-2013).

Why does deep value work?

In order to get the most of the investing framework of deep value, it is crucial to understand what drives stock prices and business conditions. At the core of deep value is a phenomenon known as mean reversion or regression to the mean. I will cover this in later articles where we delve into mean reversion and market psychology.

At this point, however, the philosophy of Deep Value can be summarized as follows:

Preservation of capital is always the highest priority. Be extremely rise adverse, and choose to invest only after making a substantial time and effort to run through any investment.

Suppose you were an engineer building a bridge. You estimated that 150 tons of vehicles passed through its roads at any given time. How much weight would you design the bridge to withstand? 150 tons? I doubt it. 200 tons? Now we are getting somewhere. How about 400 tons just to be safe.  That’s more like it.

The additional weight is the margin of safety that engineers give themselves in case their calculations turn out to be wrong. Similarly, the same applies to investments.

Suppose you calculated that the intrinsic value of a company was $0.30 a share. How much would you pay for it? The buffer that exists between the Intrinsic Value and the actual price paid is the Margin of Safety.

Understanding what you know and what you don’t is essential in getting your investments right.  Never buy into anything that you can’t understand, no matter how appealing or attractive it looks.  We all have our specific areas of expertise. Getting our circle of competence right will play great dividends in future investments.

Mr. Market suffers from wild mood swings; he might be on a manic high one day and depressed the next. The most important thing to realize is that you are free to ignore him if you chose to do so. Treat him as your friend if need be, but always realize that he’s serving you and not the other way around.

In short, exploit the tendencies of the market to swing from extreme highs to record lows. The market is just like a pendulum swing from one side to the other. Accepting it as part of the business cycle will give you conviction when others forecast only doom and gloom.

Read more: Mean reversion – how to profit between optimism and pessimism in the stock market