Under his leadership, Dialog set itself apart from most listed oil & gas companies in Malaysia as it remained highly profitable and maintained a healthy balance sheet despite the huge volatility in crude oil prices. As I write, it is worth over RM17 billion in market capitalization, making Dialog among the most valuable oil & gas corporations in Malaysia.

So what is the key difference maker?

Normally, most oil & gas companies derive the bulk of their income from securing projects. When oil prices are high, more oil & gas contracts are awarded and companies have higher chances to secure more contracts, resulting in higher sales and profits. However, when oil prices drop, there are fewer oil & gas projects awarded and companies have to compete intensely for fewer contracts, resulting in lower sales and profits.

Eventually, companies with weaker business models may end incurring huge losses or even go bust if their management is unable to navigate the recession. In contrast, Dialog focused on building a resilient business model capable of generating stable and recurring income regardless of oil prices.

In this article, I’ll give an overview of Dialog’s performance over the past 10 years, the potential risks it faces, and its pipeline of major projects to fuel its growth in the near future. Here are 17 things you need to know about Dialog Group before you invest.

1. Dialog has 30% shareholding in Kertih Terminals Sdn Bhd. It operates a petroleum and petrochemical storage terminal which has a total storage capacity of 400,000 cubic metres in Kertih, Terengganu. The terminal has been in operation since 2000 under a 20-year agreement with key users that include various subsidiaries under Petronas Chemical Group.

2. Dialog has 80% shareholding in Langsat Terminal (One) Sdn Bhd (LGT 1) and Langsat Terminal (Two) Sdn Bhd (LGT 2). Both LGT 1 and LGT 2 are engaged in the provision of centralised tankage and tank terminal facilities to the oil & gas and petrochemical industry in Tanjung Langsat, Johor. Combined, they have a total storage capacity of 647,000 cubic metres and have been in operation since 2011. Presently, LGT 1 and LGT 2 are fully-utilised.

3. Dialog has 60% shareholding in Dialog Jubail Supply Base Co. Ltd. It operates a one-stop integrated offshore logistics hub and resource centre for oilfield services, equipment, and supplies that support upstream oil & gas activities in the Arabian Gulf. Since its operations in June 2012, it has received over 900 vessel calls. In 2017, Dialog extended its contract with Saudi Aramco (the most valuable company in the world) for the supply of base oil and secured a long-term service agreement for the provision of allied services to McDermott Arabia Co. Ltd.

4. Dialog has 46% shareholding in Pengerang Independent Terminals Sdn Bhd. It operates an independent deepwater petroleum terminal with an initial storage capacity of 1.3 million cubic metres with a total of six deepwater berths. Since its commencement in 2014, the terminal has received over 1,100 vessels and is currently fully leased out. This terminal forms the Phase 1 development of the entire Pengerang Deepwater Terminal development.

5. Dialog has 20% shareholding in the D35/J4/D21 Production Sharing Contract. It is involved in the redevelopment of matured fields located 135 kilometres northwest of Bintulu, Sarawak. The duration for this contract is for 20 years until year 2034.

6. Dialog has 50% shareholding in Halliburton Bayan Petroleum Sdn Bhd. It has an oilfield service contract with Petronas Carigali Sdn Bhd to enhance recoverable reserves across the Bayan field which is located 80 kilometres northwest of Bintulu, Sarawak. The duration for this contract is for 24 years until year 2036.

7. Dialog has achieved a compound annual growth rate (CAGR) of 21.7% in group revenue over the past 10 years, from RM476.6 million in 2007 to RM3.39 billion in 2017. The sales growth was contributed from Dialog’s involvement in the projects mentioned above, particularly the Pengerang Deepwater Terminal development project. 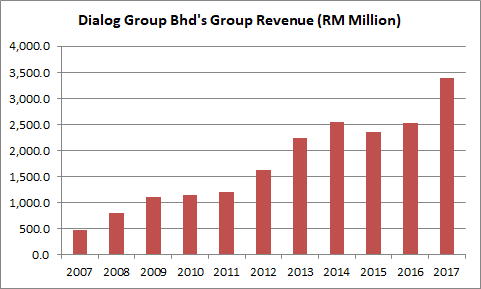 8. Dialog has achieved a CAGR of 22.4% in shareholders’ earnings over the past 10 years, from RM49.3 million in 2007 to RM370.6 million in 2017. The growth in profits is in line with the growth in revenue during the period. In addition, Dialog has received increasing profits from its investments in associate and joint venture companies which have also contributed to the growth in shareholders’ earnings over the past 10 years. 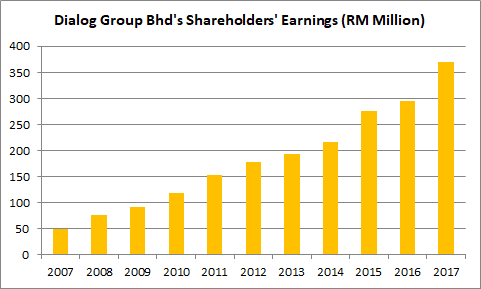 Since then, Dialog’s ROE has gradually fallen from 14.83% in 2012 to 11.91% in 2017. This is mainly because Dialog’s growth in shareholders’ equity has exceeded its growth in earnings over the last five years. 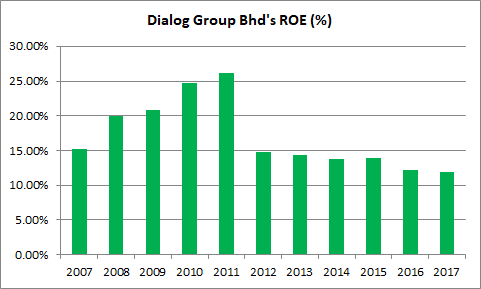 10. Dialog has generated RM2.11 billion in cash flows from operations over the last 10 years. It has also received RM383.8 million in dividends and RM104.4 million in interest income. In addition, Dialog has raised RM2.67 billion in net equity and net long-term debt during the period. Out of the capital raised, Dialog has spent:

11. Dialog has a dividend payout policy to pay at least 40% of its annual earnings to shareholders. For financial year 2017, Dialog paid 2.65 sen in dividend per share. Based on Dialog’s last closing price of RM3.06 as at 9 May 2018, its expected dividend yield is only 0.87%. The ultra-low yield is a sign of high investor confidence in the company.

12. Invariably, Dialog faces the risk of volatile oil prices which is inherent to the oil & gas and the petrochemical industry. Presently, the company remains resilient and has delivered long-term sustained growth despite the drop oil prices in 2015/16. This is because Dialog has built a business model that comprises upstream, midstream and downstream oil & gas activities. When oil prices are depressed, Dialog’s upstream oil & gas activities are impacted by the decline in prices. However, the negative impact is mitigated by Dialog’s downstream refining, logistics and petrochemical activities where low oil prices are favourable.

13. Dialog has one material litigation still in process with Tanjung Langsat Port Sdn Bhd (TLP). The backstory: Dialog previously constructed a 100,000-cubic metre oil terminal which was completed and handed over to TLP. In August 2008, there was an unfortunate fire incident at the terminal which TLP is claiming RM700.0 million in damages for. Presently, arbitration proceedings have been suspended as the settlement with TLP is currently in negotiations.

14. Dialog is now expanding the Phase 1 development of the Pengerang Deepwater Terminal project by adding another 430,000 cubic metres to its storage capacity. The expansion is expected to be commissioned on a progressive basis from 2019 onwards.

16. Dialog is also working towards securing new partners to develop its Phase 3 development of the Pengerang Deepwater Terminal project. It will comprise the development of industrial land which will be catered for further downstream petrochemical activities on 800 acres of reclaimable land and buffer zones.

17. On 10 November 2017, Dialog entered into a lease agreement for two parcels of land measuring a total of 35 acres, and a sale agreement to buy a 100,000-cubic metre tank terminal facility for a total of RM153 million from Johor Corporation. They are part of Dialog’s plan to further expand its tank terminal storage capacity by another 300,000 cubic metres at Tanjung Langsat, Johor.

Dialog Group has delivered continuous growth in revenue, profits, cash reserves, and dividend payments over the last 10 years. It has proved to be stable and resilient despite fluctuations in crude oil prices during the period. Moving ahead, Dialog will continue to grow its core businesses especially its storage tank terminals and supply base as they bring higher recurring income to shareholders in the immediate future. These developments are intended to further cement Dialog Group’s position as a leading oil & gas corporation in Malaysia.