Whenever you’re bored and your mind is on idle, you can’t help but to reach out to that f-letter word on your phone. It’s an escape, a place where you get your daily dose of news, entertainment, and interactions with your friends and family. This is not only the place that your loved ones get to know more about you, it’s also the perfect place for advertisers to target you based on your demographics, interests, and behaviors.

I’m sure you know what the ‘f’ I’m talking about by now — Facebook.

So far, it hasn’t been a smooth sailing year for the social media giant. Earlier in March, the company got hit by the Cambridge Analytica scandal. The political consulting firm hijacked data of up to 87 million Facebook users and allegedly used the information to influence voters’ opinions during the 2016 U.S. presidential elections.

But that’s not all. Last Wednesday, Facebook got smacked once again after posting its Q2 2018 earnings. Facebook’s share price plunged 18.96%, from US$217.50 to US$176.26, in one single day and wiped off US$120 billion in market value at a stroke – the biggest single-day loss in U.S. corporate history. 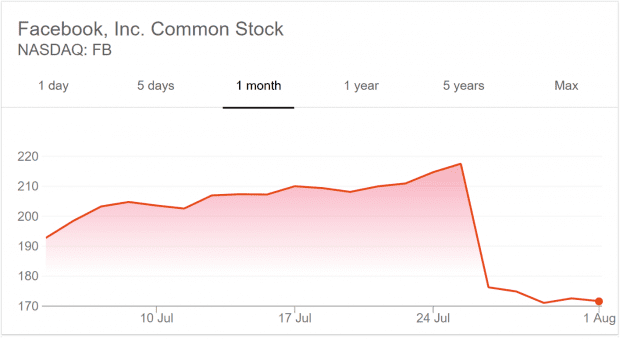 What could have possibly gone wrong to have caused such a huge knee-jerk reaction from the market? Here’s what happened…

Why Facebook lost US$120 billion in value in one day

Here are the main reasons why investors dumped Facebook when it announced its Q2 2018 earnings:

To put it simply, the market wiped US$120 billion in value off Facebook because it thinks its hyper-growth story is over.

Here’s why I think Facebook’s stock crash is a knee-jerk reaction from investors, even though I recognize their fear of Facebook’s growth slowing down:

At the end of the day, you have to keep in mind that businesses don’t rise to the top in a single straight line. There are bound to be obstacles, hiccups, and slowdowns along the way. Our job as investors is to determine whether these problems are permanent or temporary. For example, in the short term, Facebook’s investment in security and compliance may reflect badly on its bottom line, but in the long run being able to provide a secure platform for people to connect is key if Facebook wants to continue growing their user base.

Another thing you have to remember is that ‘trees do not grow to the sky’ — there’s a limit to how large and how fast a business can grow. At some point, a company will mature and its industry will reach a saturation point — Facebook is no exception. Even though it has been growing like gangbusters, there is no company in history that has been able to grow at a rate of 40% annually for, say, 30 years.

Right now, Facebook has 2.5 billion people who use one of their apps (i.e., Facebook, Instagram, Whatsapp, Messenger) – that’s already over 60% of the total number of internet users in the world right now. As Facebook grows larger and larger, a slowdown is bound to happen – and we may be starting to see that now.

So should you #DeleteFacebook from your watchlist/holdings, or is this a chance of something more? Despite its current travails, Facebook’s business model remains intact and is one half of a formidable duopoly in the digital advertising industry. The company has potential growth opportunities from Instagram, generates a huge amount of free cash flow, and has zero debt on its balance sheet.

At the same time, however, its explosive growth looks to be slowing down. The important thing is to factor Facebook’s slower growth rates in your valuation, and never overpay for a stock no matter how good the business is.

If you’re a long-term investor, Facebook will most likely be bigger and more successful five years from now. But in the short term, does that mean Facebook won’t be hit by a scandal, bad news, or another disappointing quarter again? No. That’s just part of the game.