Frasers Centrepoint Trust (FCT) (SGX: J69U) is a REIT that invests in retail malls located in Singapore. It was listed on 5 July 2006 with three retail malls valued at S$915 million in its initial portfolio. Since then, FCT has enlarged its portfolio to six retail malls worth S$2.67 billion as at 30 September 2017.

In this article, I’ll bring a detailed account of the individual performances of FCT’s properties, their impact on FCT’s group financial results, the potential risk it faces and provide updates on FCT’s overall portfolio to assess whether it is capable of delivering sustainable distributions to its unitholders in future years to come. Therefore, here are the 11 things you need to know about Frasers Centrepoint Trust before you invest.

1. Causeway Point is the largest retail mall in Woodlands and was one of the three assets in FCT’s initial portfolio in 2006 (along with Northpoint and Anchorpoint). The mall is valued at S$1.19 billion, accounting for 44.6% of FCT’s portfolio value. Thus, Causeway Point remains FCT’s trophy asset. It enjoys a 99.5% occupancy rate with a pool of 223 tenants. Causeway Point’s key tenants include Metro, Courts and Cold Storage. Overall, the mall has achieved growth in gross revenue, from S$45.7 million in 2007 to S$84.7 million in 2017. 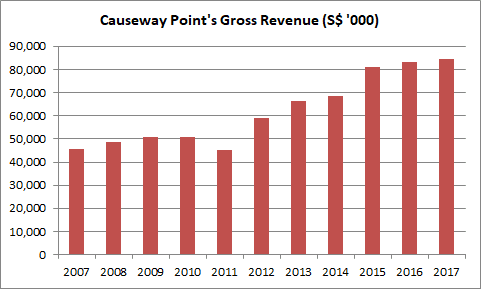 2. Northpoint is FCT’s second largest property and is valued at S$733.0 million, accounting for 27.5% of FCT’s portfolio value. Presently, it has an 81.6% occupancy rate, up from 70.9% in 2016. The reason for the low occupancy rate is due to a S$60-million asset enhancement initiative (AEI) the mall was undergoing. As I write, the AEI has recently completed and should result in an improved occupancy rate moving forward. Overall, the mall has grown its gross revenue, from S$19.9 million in 2007 to S$50.3 million in 2015, before dipping to S$42.0 million in 2017 due to the AEI. 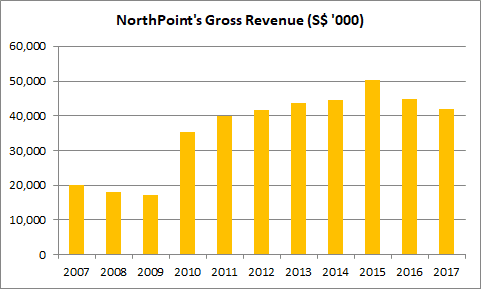 3. Anchorpoint is one of FCT’s smaller assets and is valued at S$104.6 million, accounting for 3.9% of FCT’s portfolio value. It enjoys a 96.2% occupancy rate with a pool of 55 tenants. Its main tenants include Cold Storage and Cotton On Singapore. In 2007, Anchorpoint reported significantly lower revenue as it was undergoing an AEI in that financial year. Since its completion, Anchorpoint has achieved steady growth in gross revenue, from S$6.4 million in 2008 to S$8.5 million in 2017. 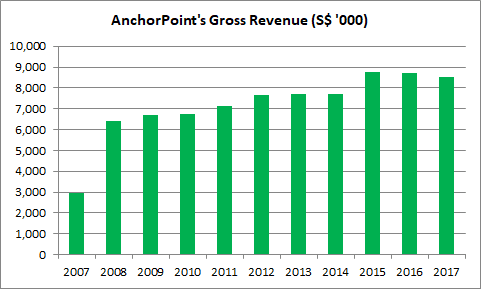 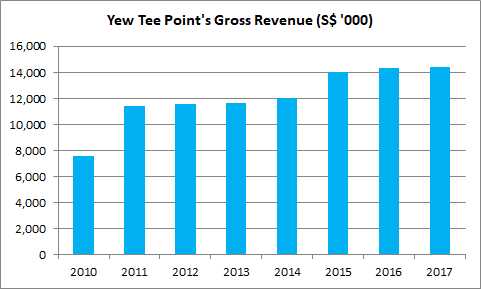 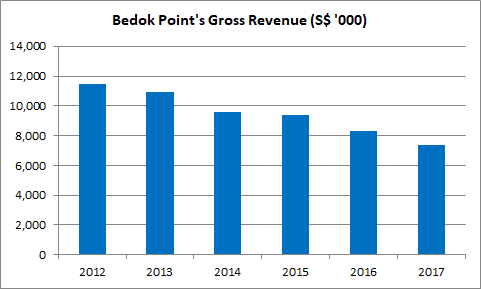 6. In June 2014, FCT acquired Changi City Point for S$305.0 million. It is a three-storey retail mall located in Changi Business Park and next to the Expo MRT station. In 2017, the mall is valued at S$318.0 million, accounting for 11.9% of FCT’s portfolio value. It has an 88.5% occupancy rate with a pool of 118 tenants. Changi City Point’s key tenants include Kopitiam, Uniqlo, and Nike. Since its acquisition, the mall has maintained its gross revenue at S$24-S$25 million over the last 3 years. 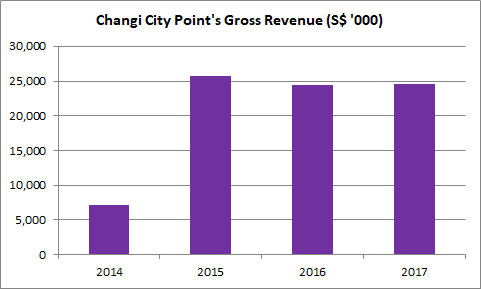 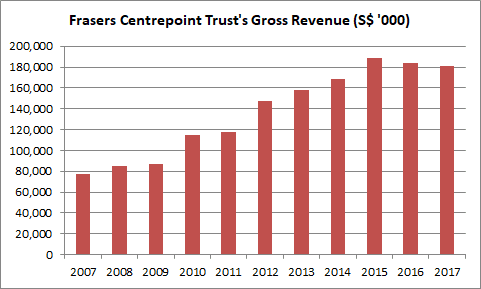 8. FCT has increased its distributions per unit (DPU) from 6.55 cents in 2007 to 11.90 cents in 2017. As at 10 January 2018, FCT is trading at S$2.27 a unit. Hence, if FCT is able to maintain its DPU at 11.90 cents, its expected gross dividend yield is 5.2%. If you note the chart, Frasers Centrepoint Trust is one of the few Singapore REITs that have been able to pay higher DPUs consistently year after year. In fact, FCT is one the top 10 best performing REITs in Singapore over the last 10 years. 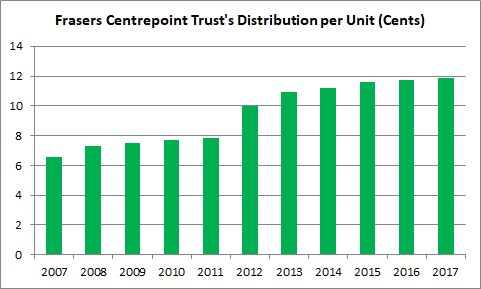 9. On 16 November 2016, Frasers Centrepoint Trust acquired 10 strata-titled retail units in Yishun 10 Retail Podium which is located next to Northpoint. Key tenants include Egalite F&B and Singapore Post. Its financial results will be included together with Northpoint and should contribute to higher revenue and income.

11. FCT is reliant on Causeway Point and Northpoint for a substantial portion of its income. The two malls made S$126.8 million in gross revenue, accounting for 69.8% of total gross revenue reported in 2017. Thus, FCT’s financials are primarily dependent on the performances of these two properties. Any negative event on either property would adversely impact the overall performances and attractiveness of FCT’s as an investment.