Frasers Commercial Trust (FCOT) is a Singapore-listed REIT that owns office buildings and business parks located in Singapore, Australia, and the UK. After FCOT posted its Q2 2018 results on 20 April, its share price fell from $1.48 to a low of $1.35 on 21 May – a drop of 8.9% over a matter of weeks.

In this article, I’ll share the cause of FCOT’s fall in share price and whether it’s still able to deliver sustainable distributions to unitholders in the near future.

Here are five things to know about Frasers Commercial Trust before you invest: 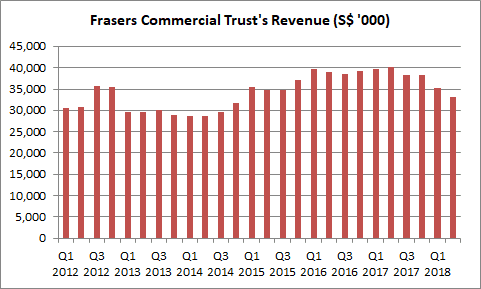 Despite the falling revenue, FCOT has managed to maintain its distributable income at S$19-20 million a quarter over the past year. How has it been able to do so? Distributable income can be paid from two sources: operating income and capital returns.

In tandem with its falling revenue, FCOT’s operating income fell 13.9%, from S$18.2 million in Q2 2017 to S$15.7 million in Q2 2018. However, this fall was offset by higher capital returns from the sale of hotel development rights at China Square Central and a return of capital from subsidiaries in Australia and the UK. As a result, FCOT has maintained its distribution per unit (DPU) at 2.4 cents over the last four quarters. 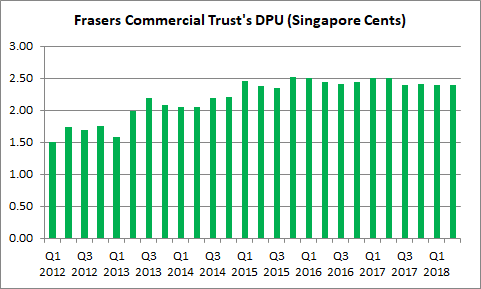 2. What caused the drop in revenue?

There are three main reasons:

Let’s start with the positives: 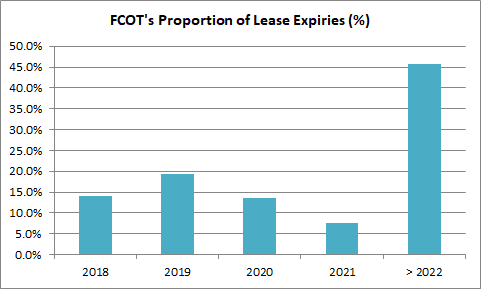 Now to move to some of the negatives:

Eighty-two percent of its debt is at fixed interest rates and its weighted average term to debt maturity is 2.2 years. FCOT has Baa2 rating by Moody’s in its credit opinion on 19 March 2018.

There are two main methods to value a REIT:

In short, I found FCOT to be a mixed bag. Its strength lies in having a strong and committed sponsor, a solid balance sheet, and long-term leases that add income stability.

Its shortcoming lies in a reduction in occupancy rates for Alexandra Technopark, China Square Central, and Central Park. However, the management intends to turn things around with AEIs on Alexandra Technopark and China Square Central. Thus, FCOT’s financial results are highly dependent on the performance of these properties once their AEIs have been completed. At the same time, the sale of 55 Market Street fetched an exceptionally good price, which the management can redeploy in higher-yielding assets.

At the moment, FCOT doesn’t look particularly undervalued with its P/B ratio above and its distribution yield slightly below their respective five-year averages. Due to some level of uncertainty surrounding FCOT right now, I would prefer to have a higher margin of safety before considering the REIT.