Frasers Hospitality Trust (FHT) (SGX: ACV) was listed on the SGX on 14 July 2014. It is a trust established to invest in hotels and service residences located in prime locations worldwide. As at 31 December 2017, FHT has a portfolio of 15 properties worth S$2.16 billion.

In this article, I’ll cover FHT’s developments since its listing, its financial results, and discuss its plans towards the immediate future. Here are the key things you need to know about Frasers Hospitality Trust before you invest.

1. FHT was listed with an initial portfolio of 12 properties worth S$1.67 billion. These properties are leased to independent hotel and service residence operators under long-term master lease agreements. The tenure of these agreements (all commencing from 14 July 2014) include:

2. Since its listing, FHT has made three acquisitions: 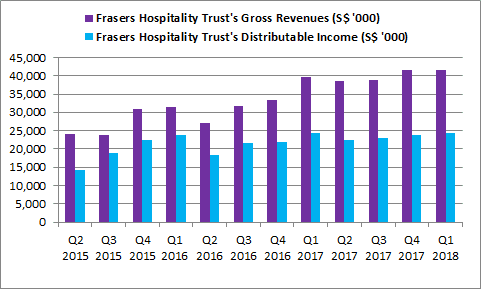 5. FHT has a 33% gearing ratio as at 31 December 2017 which is comfortably below the 45% regulatory limit. This means FHT still has debt headroom to fund acquisitions and asset enhancement initiatives to unlock potential value from its existing properties. Presently, its effective cost of borrowing is 2.8% and 88.5% of FHT’s borrowings are currently at fixed interest rates.

6. As of 30 September 2017, FHT derives income from 15 master leases of its properties. None of these leases will expire over the next five years. Excluding the master lease for Novotel Melbourne on Collins, the weighted average lease expiry (WALE) for is 16.3 years. (The WALE calculated is exclusive of the renewal of leases after the expiry of the initial term.)

7. In January 2018, FHT completed the renovation of Novotel Rockford Darling Harbour which began in April 2017. The hotel has been renamed Novotel Sydney Darling Square. FHT is in line to relaunch the hotel to benefit from the new International Convention Centre in Sydney.

8. FHT is embarking on an asset enhancement initiative to convert Best Western Cromwell London to ibis Styles London Gloucester. The project is estimated to cost £2.2 million which will rebrand the hotel in line with the ibis Styles brand. FHT expects to finalise the design by August 2018 and complete the project by February 2019.

9. In 2014, FHT was granted the right of first refusal (ROFR) for 18 properties from the acquisition pipeline from its sponsor, Frasers Centrepoint Limited (FCL), and strategic partner, the TCC Group. As at November 2017, FCL and TCC Group own a 22.6% and 38.3% interest in FHT respectively. Since its listing, FHT has acquired only one property from its sponsor — Sofitel Sydney Wentworth — and have 17 properties left in the pipeline:

10. FHT’s financial results are impacted by the performance of its hotels and service residences. This is because all master lease agreements of FHT were structured with a variable rent component where the rent is computed based on the gross operating revenue and gross operating profits (GOP) of the property. FHT will report stronger results when its properties perform well and vice versa if they perform poorly. Hence, FHT faces the risks associated with the hospitality industry including economic conditions, fall in commercial and leisure travel demand, increase in supply of new hotels, airline/transport strikes, terrorist attacks, spread of infectious diseases, etc.

At the same time, FHT has also structured a fixed rent component into all of its master lease agreements. It is a minimum amount of rent which is receivable by FHT in the event the variable rent is lower than the stated fixed rent. So there is a level of downside protection for FHT if its properties perform poorly in the future.

Since its listing, Frasers Hospitality Trust has proved itself to be rather resilient in the face of the Paris attacks in November 2015 and delivered steady growth in distributable income to unitholders thus far. With a low gearing ratio of 33% presently and an extensive pipeline of ROFR properties, FHT is currently in a healthy position to grow its portfolio to increase and diversify its future income.