Frasers Centrepoint Limited listed on the SGX in January 2014. The company is a multinational integrated real estate conglomerate with a wide range of properties located primarily in Singapore, Australia, and China. As at 30 September 2017, Frasers Centrepoint has a total of S$27 billion in assets.

On 1 February 2018, Frasers Centrepoint Limited changed its name to Frasers Property Limited to reflect its ambition of building a global property brand, and to provide greater clarity on its brand identity as the company has been operating under the name Frasers Property outside of Singapore for many years.

In this article, I’ll cover the five-year performance of each of Frasers Property’s strategic business units and the company’s income visibility in near-term. By reading this, I hope it helps you to understand Frasers Property’s business model and financials better — which are part of the Investment Quadrant system when doing our stock research.

Here are 11 things to know about Frasers Property before you invest:

1. Singapore – Frasers Property is among the top residential property developers in Singapore as it has built over 19,000 homes to date. Frasers Property is the sponsor of a retail REIT, Frasers Centrepoint Trust, and an office REIT, Frasers Commercial Trust, with a 41.7% and 26.8% stake respectively. Apart from REITs, Frasers Property itself owns several retail malls and office buildings in Singapore collectively worth S$12.3 billion as at 31 December 2017. Over the last five years, Singapore recorded a decline in profit before interest and tax (PBIT) from S$499.4 million in 2013 to S$408.2 million in 2017. The decline was caused by a substantial fall in profits as a result of the property cooling measures exercised by the Singapore government since 2013. On a positive note, this decline was partially mitigated by a growth in profits received from its property investments in both REIT’s and non-REITs during the period. 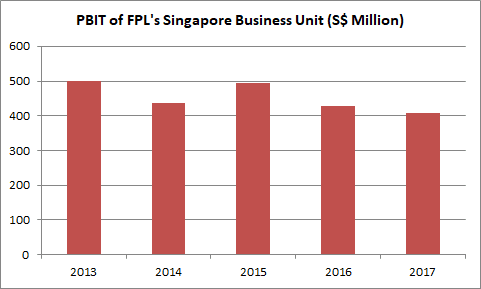 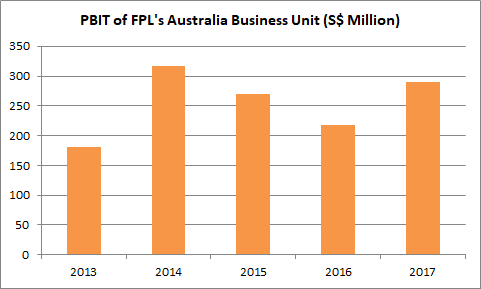 3. Hospitality – Frasers Property presently owns 148 hospitality properties located in 80 cities worldwide. They operate under brands such as Fraser Suites, Fraser Place, Fraser Residences Modena by Fraser, Capri by Fraser, Hotel du Vin, and Malmaison. This is inclusive of 15 properties which are held under Frasers Hospitality Trust, a hospitality REIT that Frasers Property has a 22.6% stake in. Hospitality has achieved growth in PBIT from S$69.7 million in 2013 to S$154.2 million in 2017, which is in line with the expansion of its hospitality assets during the period. 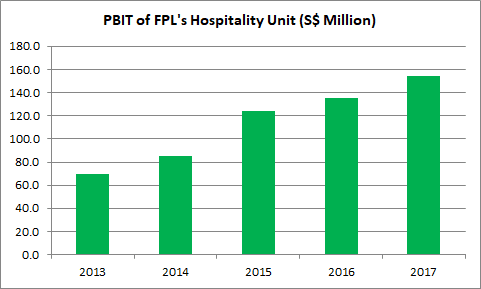 4. International – Since 2016, Frasers Property has aggressively expanded its international unit which now owns a portfolio of strategic assets located in China, Britain, Germany, Holland, Vietnam, and Thailand. This was done through acquiring stakes and properties such as:

International has reported year-on-year growth in PBIT from S$185.7 million in 2016 to S$274.1 million in 2017. This was contributed directly by higher property sales in China and Frasers Property’s new investments in Holland and Thailand. 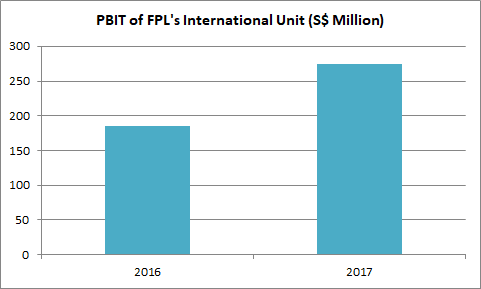 The following are key highlights of Frasers Property’s financial results since its listing:

5. FPL has almost doubled its asset base from S$10.4 billion in 2013 to S$27.0 billion in 2017. This is due to its purchase of major subsidiaries and associate companies such as Australand, hotel brands Malmaison and Hotel Du Vin, and its acquisitions listed in Point 4. 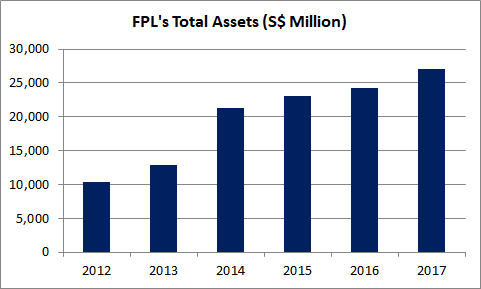 6. Frasers Property increased its revenue from S$1.41 billion in 2012 to S$4.03 billion in 2017. Likewise, PBIT grew from S$390.2 million to S$1.09 billion during the same period. This was mainly contributed by stable earnings from its REITs, higher PBIT from its hospitality unit, and strong property sales in China, which offset the weak property sales in Singapore. From 2012 to 2015, profit before fair value change and exceptional items grew steadily from S$252.4 million to S$543.8 million before dipping the next two years. The fall was due to lower profits derived from Frasers Property’s joint ventures and higher tax expenses in 2016-2017. 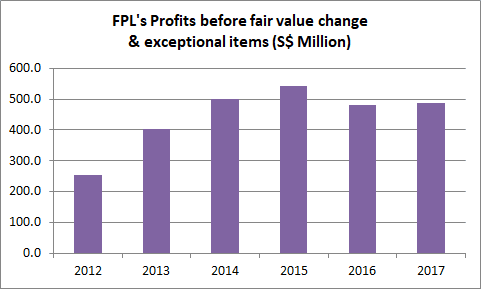 8. As at 30 September 2017, Frasers Property has a net debt-to-equity ratio of 0.71, a cash balance of S$2.14 billion and a current ratio of 1.93. It’s relatively strong balance sheet enables the company to continue financing its development activities and acquisitions for the foreseeable future.

FPL is expected to derive future income from:

9. As at 30 September 2017, Frasers Property has unrecognized revenue of S$3.4 billion in Singapore, Australia and China. This will provide some level of income visibility from its development pipeline, out of which S$2.2 billion is contributed from Frasers Property Australia. Moving ahead, Australia is expected to be Frasers Property’s largest contributor of development income in the near future as the company plans to release 2,000 residential units for sale there in 2018.

11. As at 30 September 2017, Frasers Property has over 15,000 serviced apartments and hotel units, with another 8,000 units in the pipeline. The company targets to increase its hospitality assets to 30,000 units by 2019. On 6 February 2018, Frasers Property’s hospitality unit announced it will invest S$250 million to develop a new serviced residence in the Ginza district, Tokyo. It is scheduled to open in 2020 to cater for the expected rise in tourists for the upcoming Summer Olympics.

Since its listing, Frasers Property has transformed itself from a predominantly Singapore-based entity to a truly multinational real estate conglomerate with over half of its assets based outside Singapore.

Moving ahead, the company is well-positioned to scale its presence overseas particularly in the UK and Europe as the management is in favour of its long-term prospects there.

Liked our five-year analysis of Frasers Property’s business model and financial performance? Here’s how to break down a company’s business segments, growth drivers, risks, financial ratios, and stock valuation to measure the quality of the company — before we decide whether its a stock worth owning at the right price. Read more »