This article is a follow-up of my previous article, Grexit: The Fallout if Greece Exits the Euro, that was published recently on 27 June 2015. In that article, I wrote about how our export-based economy is vulnerable to the possibility of Grexit. When that article was written, it was still possible for Greece to avoid default and stay within the Eurozone. In other words, there was hope that despite the negative headlines that the status quo would be maintained.

However events deteriorated swiftly over the weekend and this article serves to inform you about the key events and what it all means to your financial well-being right here in Singapore.

Greece Prime Minister Alexis Tsipras surprised the whole world by announcing his intention to put the bailout proposal to a referendum to the Greek population on June 27. The Greek Parliament had a marathon overnight session and approved the referendum which is to be held on July 5. The current Syriza government came into power in January 2015 on the premise that they will satisfy two conflicting demands by the Greek population.

The Greeks want to stay within the Eurozone because they wish to enjoy the benefits of using the Euro but at the same time they do not wish to endure the austerity measures imposed due to the Greek debt. This is untenable because the Greeks cannot agree to the conditions for staying within the Eurozone which is to cut their pensions and raise taxes. Hence the proposed referendum would be for the Greeks to decide if they want to accept the latest bailout proposal which would involve the pain of austerity or choose to default on their loans and exit the Eurozone.

However there is a major flaw in Tsipras’ referendum. The deadline for the bailout proposal is on June 30 and the referendum is to be held five days after the deadline. In other words, there would be no bailout proposal for the Greek population to consider unless the creditors decide to extend the deadline. However this appears to be dead in the water as seen in the remarks reported by Bloomberg. The chairman of the Committee of Eurozone Finance Ministers, Jeroen Dijsselbloem, was quoted as saying:

“That is a sad decision for Greece. It has closed the door on further talks while the door was still open, in my mind.”

Hence Greece would not be able to get the €1.55 billion euro bailout which it needs on June 30 to stay current on its debt. In other words, even if the Greek population were to vote to accept the harsh bailout conditions, Greece will be out of the Eurozone. The current Greek government inclinations are clear and they have openly encouraged Greeks to refuse the bailout proposal and exit the Eurozone.

In my previous article, I noted that the Greeks had started to run on their banks and an estimated €2 billion flow out of Greek banks every month. In response to the flawed referendum, Greeks redoubled their efforts on June 28 to withdraw money from ATMs which quickly emptied the ATMs within hours. In addition, the European Central Bank (ECB) refused to provide additional emergency lending to Greek banks in light of the new referendum. The Greek government responded by setting up capital controls which restricted ATM withdrawals to €60 per day.

This has lead the Netherlands to issue a travel advisory for its citizens to be extra careful when travelling to Greece and to bring extra cash. This is also being echoed by the UK and Canada even if the €60 restrictions do not apply to tourists for now.

This capital control led the global ratings agency, Fitch, to downgrade Greeks banks from a very bad ‘CCC’ to Restricted Default ‘RD’. The capital control goes against the very nature of deposits which is for depositors to withdraw their funds on sight. In fact, the capital control can be seen as a measure to prevent Greek banks from running out of euros to repay their depositors. Standard and Poor also downgraded Greece’s sovereign rating from ‘CCC’ to ‘CCC minus’ with a 50% chance that Greece will exit the Eurozone.

The Greeks had responded to these austerity measures with protests that turned violent as these Telegraph photos show last week. This shows the high level of discontent within Greek society. The imposition of capital controls led to renewed anti-austerity protests outside the Greek Parliament on June 29 on the same day of the capital controls. This is a sign of renewed instability within Greece.

Now that we know how the surprise Greek referendum led to capital controls and growing unrest in Greece, it is time to take stock of how the global markets responded to the sudden development.

The United States, represented by the S&P 500, fell more than 2% for the first time this year on June 29 with a 2.09% drop. The Dow Jones Industrial Average dropped by 1.95% on the same day but technology stocks lead the plunge as seen by the 2.4% drop  in the NASDAQ Composite Index.

China, the second largest economy in the world, had a greater negative response as it has invested heavily in Greek infrastructure in recent years. In China, the Shanghai Composite Index dropped 5% and Shenzhen Component Index lost 6% on June 29 alone. For Shanghai, this represented a 20% decline from its recent June 12 peak. For Europe itself, the Frankfurt DAX 30 fell by 4.26% on June 29.

Now that you know that major markets around the world plunged, the bigger question is why. Contagion risk would sum it up. This has only been two days in and yet we are seeing 10-year bond yields soaring by 20-25 basis points in one day for Italy, Spain and Portugal. In other words, investors are now dumping bonds of these weaker nations which makes it more expensive for these governments to issue new bonds. They are now clamouring for German bonds which is seen as safer and its yield fell by 14 basis points.

The bigger question in investors’ minds is that now that Greece has defaulted: Who is next? And the answer is now increasing clear. Hence even if the Troika (IMF, EU and ECB) had purchased the bulk of Greek’s bad debt, the bottom-line is that Europe itself is not immunized to the Grexit contagion.

This is how the British Chancellor of the Exchequer (UK’s term for finance minister) George Osborne cautioned the UK Parliament on the seriousness of Grexit:

“I don’t think anyone should underestimate the impact that a Greek exit from the euro would have on the European economy – and the knock-on effects on us. The British government and the Bank of England stand ready to ensure our financial stability in the UK.”

Osborne is preparing for the Grexit shock wave to reach the UK despite the fact it is using a different currency and its economy is in a much stronger position. This is how serious and far reaching Grexit is.

I know that the Grexit drama has been dragging on the market for quite some time now and nothing dramatic has happened until now. You have now seen the ‘dent’ on the global stock markets and this is just the beginning as further uncertainty weighs on the market. For instance, the Greeks are threatening to sue the EU for forcing them out even as they default on their payments.

Since we are in Singapore, the biggest impact is likely to be in the Singapore stock market. I have taken the liberty of using the SPDR STI ETF (ES3) to represent the broad Singapore market: 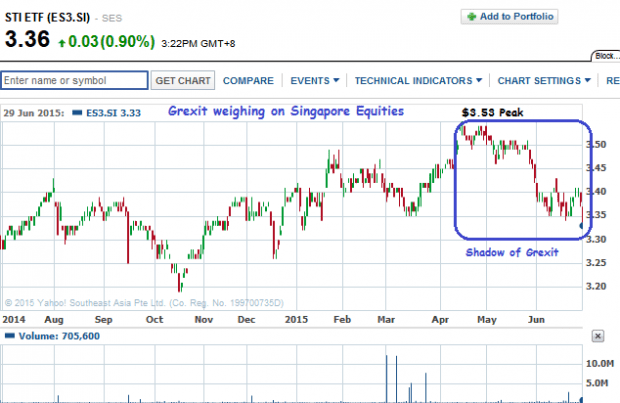 The whole Grexit saga has yet to play itself out so there will be further declines in Singapore equities. This is not just based on sentiment but actual reduced demand for Singapore’s exports as the global economy slows down or even plunges into recession in the worst case scenario. In my opinion, I’m staying out of local equities until there is clearer outlook on this matter.